There has not been added a translated version of this content. You can either try searching or go to the "area" home page to see if you can find the information there
Fieldwork

On the 25th and 26th of April and 12th of May Nepal was struck by massive earthquakes. One year later we wanted to explore which farming systems fared better or worse after this natural disaster.

We travelled to Charikot, the district headquarters of Dolakha and one of the hardest hit districts where 99 % of all houses were partially or completely destroyed.

Katie Epstein (resource geography), Jessica DiCarlo (development geography) from the University of California Berkeley, Govinda Paudel and Bikash Adhikari from Forest Action in Kathmandu, an NGO working with community based forestry, and I ventured to the field. Using a mixed methods approach including household surveys, focus group discussions, key informant interviews, informal interviews and transect walks, we set out to explore the consequences of the quake on the local farming systems. Katie and Jessica will spend all summer (the main growing season) in the field to finalize this work.

Response to the earthquakes unfolded in stages. Community members were the first to respond, neighbours helped clear debris and search for survivors and dead. INGOs and NGOs flooded in soon after. Though the national government aimed to keep a “one door” policy, chaos soon ensued as aid in the forms of food, materials and money arrived from across the globe. However, this initial influx of aid was followed by a period of “limbo” with reluctance to rebuild because locals feared they would not receive government support if there was individual initiative.

Farming communities were among the most heavily affected by the quakes. Farmers had to prioritize cuing for relief materials at district headquarters over planting seeds and tending fields. Now, a year later food security and health have become the central focus of relief efforts. People continue to camp in rudimentary shelters awaiting aid and many farms remain fallow. As the agriculture officer in Chandrikot lamented: “the quake has set back farming development by at least 10 years”.

Nepal is in the midst of deep agricultural transition. Traditional farming practices are giving way to more market oriented approaches and causing manifold landscape change, irrespective of the quakes. Instead of traditional maize, rice and millet, kiwi, cardamom and potato provide quick cash and income with less labour input. In the post-disaster period, these changes have catalysed this transformation. Disturbed post-disaster landscapes in Nepal are particularly suited to cardamom, which can be intercropped under early successional alder stands (Alnus nepalensis; otis). Local farmers refer to cardamom as black gold because of its easy cultivation, high market value, and potential for perennial production of up to 10 years. Common crop predators like monkeys show little interest in it. Even on the most highly valued farmland they are now growing cardamom, allowing farmers to make an easy profit with which they purchase their staple foods, such as rice.

Not all landscape change is positive. Many small-scale farmers, seeking to optimize labour inputs, are converting their most marginal fields to pine forests (Pinus roxburgii). Pine’s shallow root systems exhaust critical water resources, leaving little for other understorey species, hence the term “green deserts”. Though the timber can eventually be sold, the payback period is long and clear cutting leaves slopes vulnerable to landslide and erosion.

Despite historically pervasive tensions over water use in the region, post-earthquake damage to spring sources and irrigation infrastructure have heightened conflicts. Large cracks in water-heavy paddy fields prevented rice cultivation the first season after the earthquake, aggravating food security throughout rice-dependent Nepal. Village dependent spring sources were widely reduced or disappeared due to sub-surface tremors altering water tables. Some new sources appeared, but far too few to make up for the loss. Throughout mid-mountain Nepal, these shifting landscape patterns are accompanied by increasing impacts from climate change and have exacerbated migration from the hills.

We hope our research can show how the future of Nepali farming systems and food security remains inextricably entwined with its water and forest resources, and require the capacity to cope and adapt to environmental shocks. 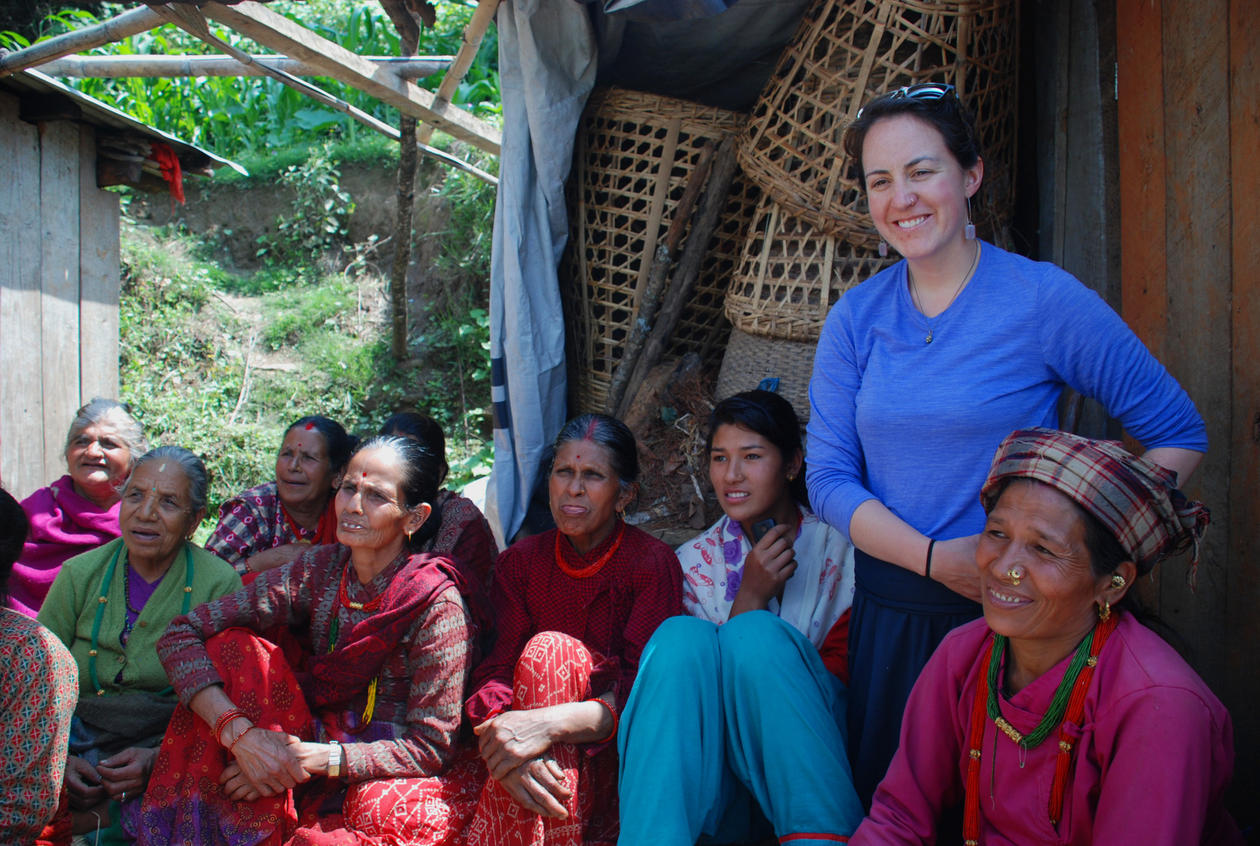 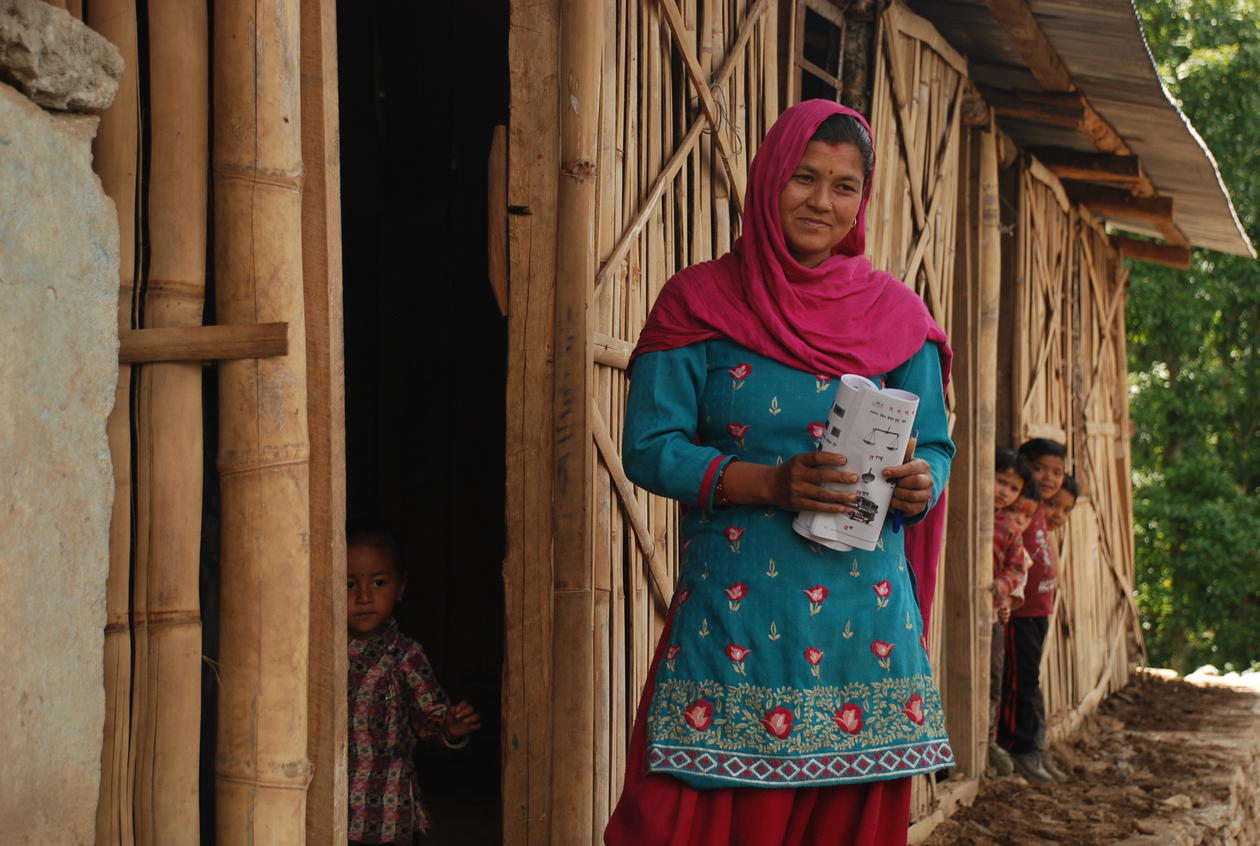 Teacher and children at a make-shift school rebuilt after the quakes in Sundrawati VDC.
Foto/ill.:
I. E. Måren 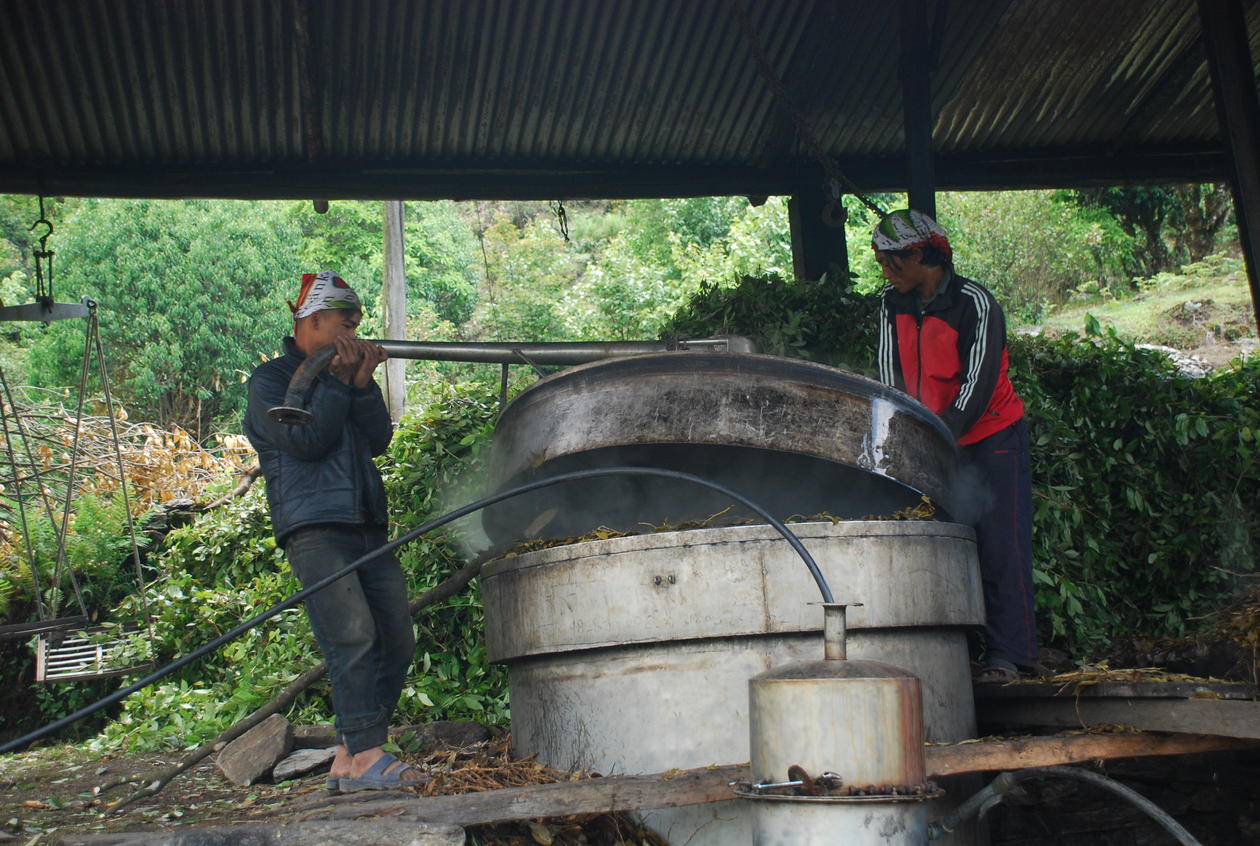 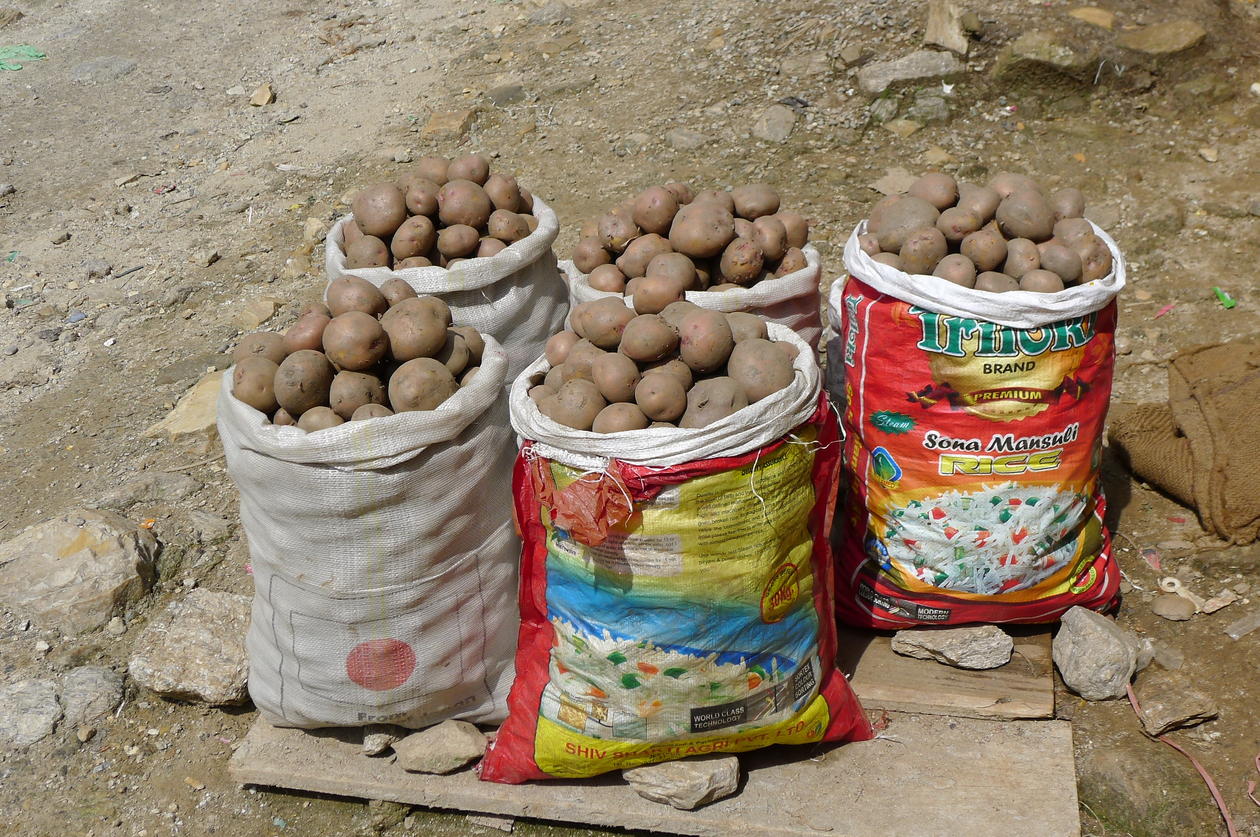 Potatoes grown in this region in renowned throughout Nepal for their good quality and great taste.
Foto/ill.:
I. E. Måren 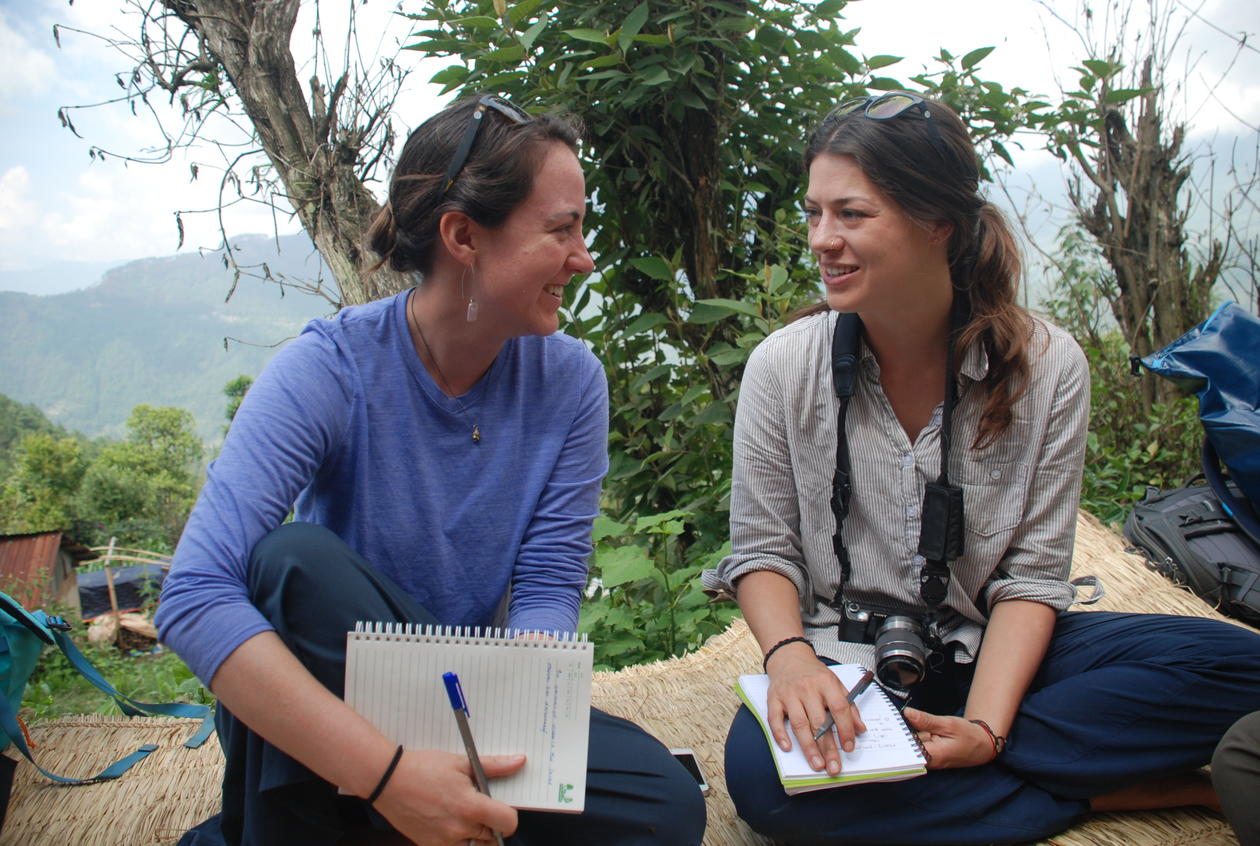 Katie Epstein (left) and Jessica DiCarlo (right) from UC Berkeley at work in the field in Dolakha.
Foto/ill.:
I. E. Måren 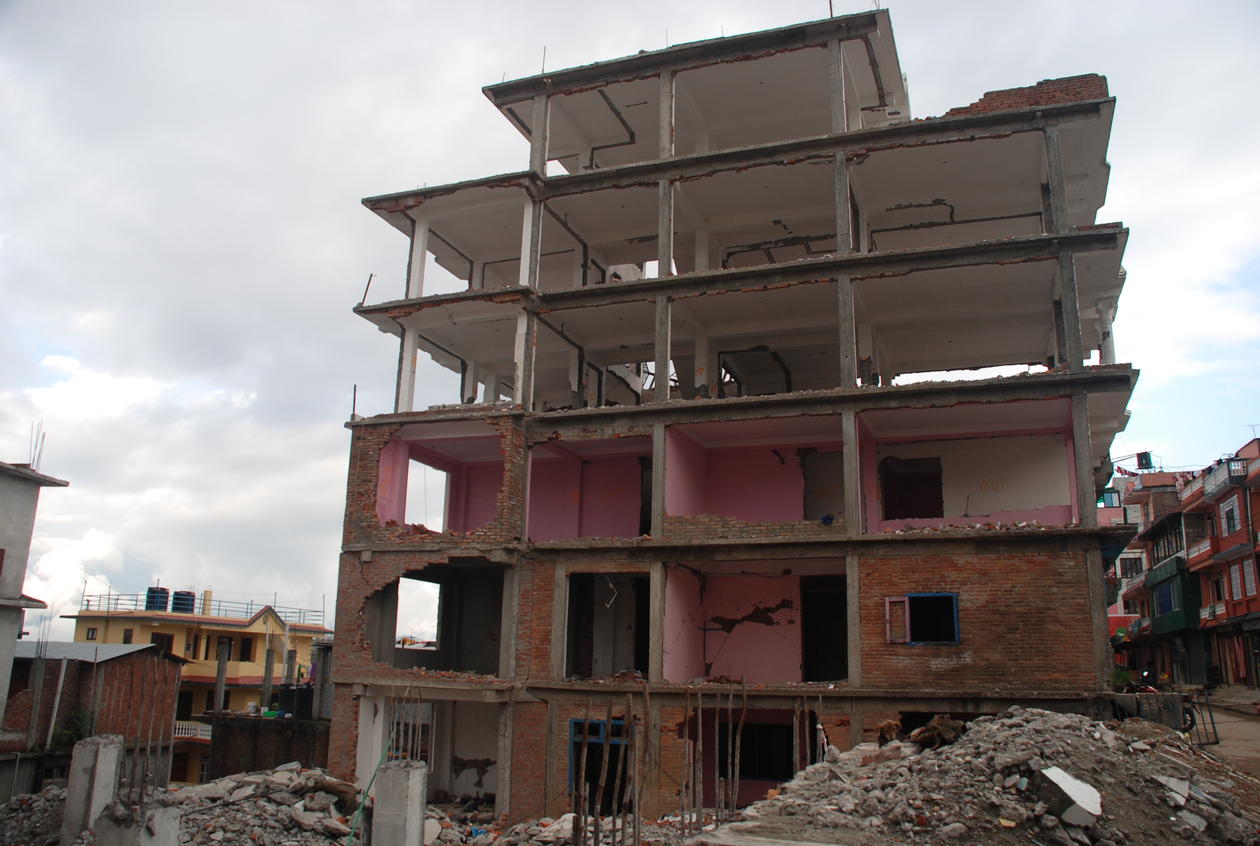 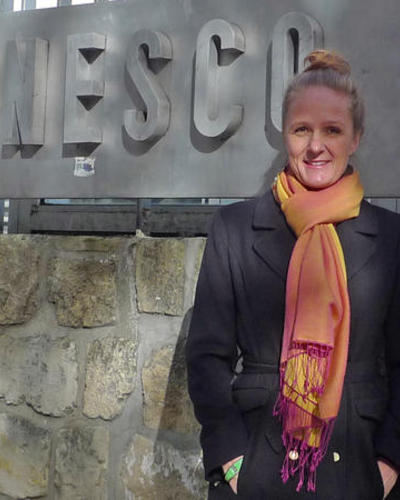