Anthropologists have previously engaged in virtual fieldwork in order to discover and document different large online worlds such as World of Warcraft (Nardi 2010), Everquest (Taylor 2006), Second Life (Boellstroff 2008). These ethnographies cover a multitude of topics such as motivations for playing, gender disparity, addiction, and language. This thesis looks away from the large online role-playing worlds, yet take inspiration from previous anthropological works in order to take a closer look at university students in Orange County in California who spend their time playing competitive video games for social and economic rewards. I observed and documented two teams of collegiate esports players during their weekly training sessions and performed informal interview with persons on collegiate esports teams, university staff, tournament hosts, student run gaming organizations, tech companies, sponsors, and esports fans.

This thesis connects to the growing literature on video games as it explores ways in which collegiate esports players create new forms of language and social relations. It delves deep into the in-game linguistics communications players use to succeed in their competitions, and how specialized negative and positive lexical words are created and used to describe established emotions of rage or respect towards opposing and friendly players. I attempt to show how traditional understandings of playing games and sports are applicable to esports, and how concepts of “fun” and “work” challenge each other when recreational activities become professionalized and award participants with social and economic rewards. Research also led me to study how collegiate esport players use and understand spatial navigation in the games, using game developers “camera” creation in order to traverse and navigate the virtual worlds they inhabit. This research also looks at how the video game culture has stereotypically been seen as a homosocial sphere for men. How these stereotypes have played into society making it difficult many people to participate despite no physical limitations for doing so. I attempt to shed light on important aspects of the disparity of gender in the wider gaming culture, yet show hope that efforts are being made to create a more open culture for all gamers. Finally I briefly discuss gendered time obligations and how the moral panics of video game addiction can distract mainstream society from life struggles of individuals. 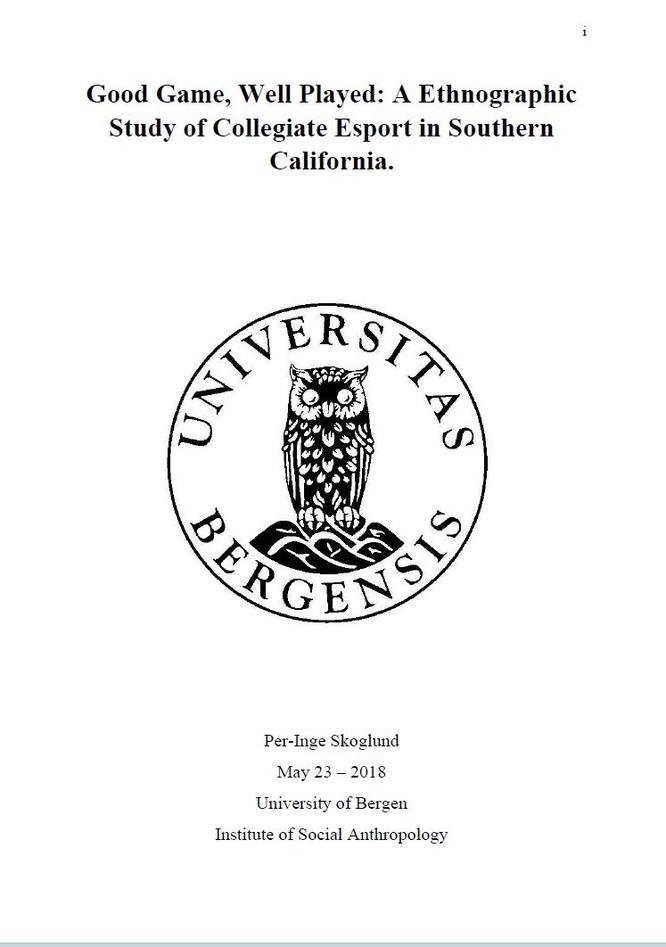