In this lecture Professor László Lovász, Abel Prize Winner in 2021, will survey some forms of interplay between graph algorithms and geometry: algorithms for perfect graphs, maximum cut, connectivity, bandwidth.

The lecture: Graphs and Geometry

To represent a graph by a nice geometric picture is a natural goal in itself, but in addition it is an important tool in the study of  various graph properties and in the design of graph algorithms. We survey some forms of this interplay between graph algorithms and geometry: algorithms for perfect graphs, maximum cut, connectivity, bandwidth.

A brilliant mathematician since he was a teenager, László Lovász more than delivered on his early promise. Born in 1948 in Budapest, Hungary, he has also served his community as a writer of books, noted for their clarity and accessibility, as an inspirational lecturer, and as a leader, spending a term as president of the International Mathematical Union (2007-2010).

In the 1970s graph theory became one of the first areas of pure mathematics able to illuminate the new field of computational complexity. Lovasz later said that he was very lucky to experience one of those periods when mathematics was developing completely together with an application area. In addition to his work on the foundational underpinning of computer science, Lovász has also devised powerful algorithms with wide-ranging applications, such as the LLL algorithm, which has had remarkable applications in areas including number theory, cryptography and mobile computing.

In addition to recieving the Abel Prize in 2021 together with Avi Widgerson, Lovász has won many awards including the 1999 Wolf Prize, the 1999 Knuth Prize, the 2001 Gödel Prize and the 2010 Kyoto Prize. 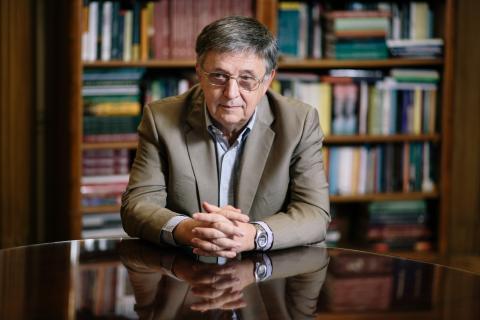