What happens in a few billionths of a billionth of a second? - Horizons lecture by Anne L'Huillier

2015 is the UN "International Year of Light - and light based technologies". What can we measure with short pulses and what can we learn that we don't already know?

About the lecture (held in English)

The shortest time interval produced and controlled by mankind is the duration of a light pulse of about 100 attoseconds, i.e. 10-16 s. This presentation introduces the physics of attosecond pulses generated when an intense laser interacts with a gas. It will also try to answer the question: "what can we measure with such short pulses and what can we learn that we don't already know?"

Refreshments will be served before the lecture, which starts at 15.15 pm, on Thursday 12th of November in VilVite (Thormøhlens Gate 51). Everybody is welcome!

UNs International Year of Light - and light based technologies

2015 is the UN decleared International Year of Light - and light based technologies. It aims to raise global awareness about how light-based technologies promote sustainable development and provide solutions to global challenges in energy,  education, agriculture and health. Attosecond light pulses are in this context the shortest man made light pulse, with a range of applications.

After a theoretical education Anne L’Huillier decided to go into experimental atomic physics for her thesis, which she performed at the Commissariat à l’Energie Atomique in Saclay, on the subject of multiple ionization using intense laser fields. After this she took the opportunity to learn more about theory during postdoctoral studies in Gothenburg and in Los Angeles. She got a permanent position as researcher at the CEA in 1986. In 1987 she participated in an experiment where high harmonics were observed for the first time using a picosecond Nd:YAG laser system. She was so fascinated by the experiment and decided to devote her research to it (and still does 23 years later). In 1992 she came to collaborate on an experiment at the newly inaugurated highpower laser facility in Lund, which included one of the first femtosecond titanium-sapphire laser systems in Europe. She moved to Sweden in 1994, got a lecturer position in 1995 and a professorship in 1997. She has received numerous international awards for her work, and she is a member of the Swedish Academy of Sciences and the Nobel Committee in Physics.

She now works at The Division of Atomic Physics at the Faculty of Engineering (LTH), Lund University, Sweden. 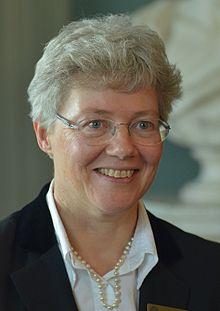