In the Wake of Colonialism 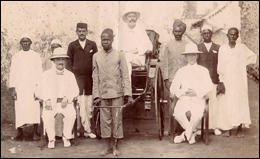 Scandinavian scholars, and perhaps particularly Norwegian ones, have tended to view the history of overseas commercial activity and migration as a trans-Atlantic venture – geared particularly toward the USA.

However, Norwegian entrepreneurs also saw the potential of the new colonies and played an active part in the expansion of the colonial trade system. There were traders, shipping agents, freighters, whalers, fishing managers and landowners – in Africa as well as in the Pacific.