Grieg Research Scool of Interdisciplinary Music Studies was established in December 2010, and it's a result of the cooperation between the institutions in the network MusicNet West.

In March 2009 MusicNet West formed a group that would work with plans for a regional research school run by the institutions in the network. The group consisted of Professor Brynjulf Stige, University of Bergen, Professor Magne Espeland, Stord/Haugesund University College and Associate Professor Tiri Bergesen Schei, Bergen University College. 1 May 2010 this group presented a note about aims, content and forms of cooperation for such a research school, and they suggested establishing the research school during 2010. Thinking about the regional anchor, the international profile and the interdisciplinary orientation, the group suggested the following name for the research school: Grieg Research School in Interdisciplinary Music Studies.

MusicNet West sent an application for funding to UH Net West. A grant for establishment was given in September 2010 and the research school was officially opened 1 December 2010.

The research school will include the following disciplines: Music education, music therapy, musicology (inclusive ethnomusicology) and music performance/composition. The cooperating institutions all have strong academic milieus within research and artistic development. What we hope for by establishing the research school is both that the academic milieus will grow even stronger both nationally and internationally if the competencies are coordinated, and that this will give a solid and versatile milieu of candidates. 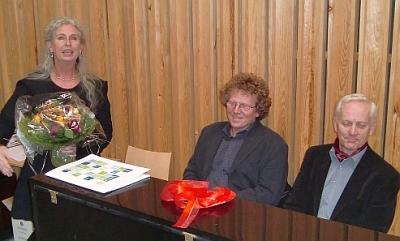 The group who initiated the establishing of Grieg Research School, from the left: Tiri B. Schei, Brynjulf Stige and Magne Espeland.
Photo:
GRS
06.05.2014