Two lectures intended for a wide audience (held in English). A joint event between the Horizons seminar series of the Faculty of Mathematics and Natural Sciences and The Darwin Day in Bergen.

Henrik Glenner - New views on animal evolution
The animal part of the Tree of Life has changed dramatically since molecular biology was introduced to the research field about 25 years ago. Molecular disciplines, such as evolutionary developmental biology (EvoDevo) and phylogenomics (DNA sequences from entire genomes), have provided convincing data that puts the branches in new positions. Major animal groups that share a similar anatomy and were thought to be closely related have been split up and moved further apart, while controversial new groups have emerged as new branches. Although the new tree is widely accepted, it has proven challenging to explain how anatomy has evolved in parallel with new branches. This will be illustrated with examples in the talk. Further, the basal part of the tree, which includes sponges, jellyfishes, corals, and comb jellies, is still highly debated, and brand new (and controversial) molecular data suggests that we, once more, might have to revise our view on the evolution of animals.

Andreas Hejnol - Unravelling the evolutionary kinships of animal diversity
We encounter an amazing animal diversity on this planet. Fascinated by animal documentaries that show behaviour of animals and illustrate recent explorations of the ocean abyss we enjoy this diversity and its beauty. Over 150 years after Darwin's publication of The origin of species researchers are still investigating how diversity on this planet has evolved. Modern technology of DNA sequencing and advances in computational biology allows us to draw a clearer and more detailed picture about how these animals are related to each other and thus allow to trace back the evolution of major organ systems including our brain, digestive tract, and musculature. The findings of these efforts have led to many surprises and unexpected findings. Often against our intuition that everything went from simple to complex, the results sometimes indicate the contrary. However, the research is still ongoing and many questions remain and are hotly debated. I will explain the modern methods used to unravel animal relationships, introduce some of the recent findings and what they mean for our understanding of complexity in general and for the evolution of our own organ systems.

Andreas Hejnol is group leader at the Sars International Centre for Marine Molecular Biology at the University of Bergen. Together with colleagues he analyses similarities of the genetic sequence and compares embryological development among animal groups to improve our understanding of the evolutionary relationships among them.

Henrik Glenner is professor of marine zoology and group leader for the research group in marine biodiversity, Department of Biology, University of Bergen. Glenner shares with Darwin a passionate fondness of barnacles. Glenenr also does resarch on other crustaceans, with emphasis on their life cycles and phylogenetic relationships. Initially trained in classical morphology, he now regularly involves multple scientific disciplines to address his research questions.

The event starts with a snack and refreshments in advance of the lecture that begins at 18.15 (Thursday 20th February at Studentsenteret, Egget)

Interested in upcoming Horizon lectures? Send an e-mail to Kristin Bakken to receive information by e-mail in advance of lectures or join The Horizon group on Facebook. 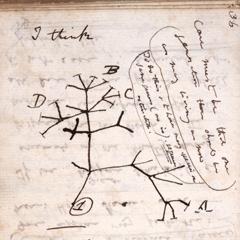