Last autumn, CET affiliates were invited to participate in a pilot study using the CET Carbon Tracker to register CO2 emissions from their own travels and meeting that they organize. The data from the pilot study has now been collected and analyzed.

The Carbon Tracker is a CO2 calculator that was developed for academics to calculate climate gas emissions from own long-distance travels and from plane travels by participants to meetings that academics organize. These activities are often associated with large climate gas emissions and are at the same time largely within scientists’ own control.

The Carbon Tracker was designed to give an overview of total emissions from own travels and meetings, assuming that this will contribute to raising awareness of own emissions, which is one central element in the CET Low-carbon Travel Policy.

One key feature for the Carbon Tracker is that it should be used already when travels/meetings are being planned. In that way, the user can take measures to reduce climate gas emissions by prioritizing between travels, consider alternatives such as video meetings, combine meetings when possible, choose more climate-friendly modes of transport, and consider where to organize meetings and whom to invite to limit climate gas emissions. The user is asked to register key parameters related to each travel/meeting, including a self-assessment of its importance, and can conduct his/her own analysis by selecting subsets of the data.

A total of 17 own travels were registered, by 8 out of the 10 participants. The majority were multipurpose trips (10), and the most common purpose was conferences /meetings / courses where the person was presenting (10). Many travels regionally and within Norway/Scandinavia involved travels by train (10) or bus (5), which dominated the overall travel time. Still, a similar number of travels by plane, mostly to Europe and “Rest of world”, resulted in substantially larger emissions: 10.6 tons CO2e from all plane travels compared to 0,4 tons CO2e from all train and bus travels. Out of 11 travels regionally or within Norway, only 2 involved plane travels.

The pilot participants had registered 12 meetings that they organized, but only 4 had flight travels by participants associated with them, which is what should be registered in the CET Carbon Tracker. Participation by video was rarely offered for the meetings. The CO2 emissions varied largely between meetings, and the overall emissions (70,2 tons CO2e) were dominated by one large conference/ symposium with large number of participants travelling by plane from within Scandinavia, Europe and Rest of the world.

It remains to better understand how the CET Carbon Tracker was perceived and used, and also why not more CET affiliates chose to participate. To address this, we plan to conduct a survey among CET affiliates, both those who participated in the pilot and those who did not. We will also present these findings in more detail and discuss how to move forward with the CET travel policy at a CET lunch later in the spring.

We would like to thank those who participated in CET Carbon Tracker pilot study. 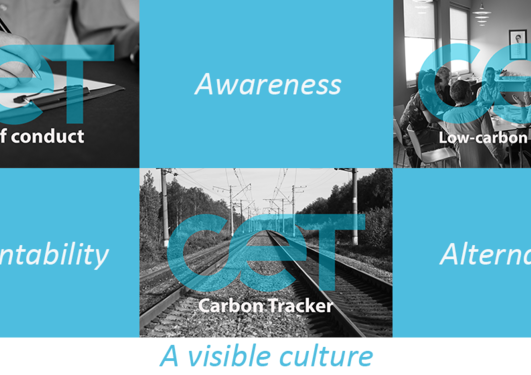 Academic researchers are amongst the highest emitters of climate gas emissions. CET's Low-Carbon Travel Policy hopes to mobilize and inspire to reduce our impact.