Research at the Haavik lab

Targeting proteins for the treatment of ADHD and ASD

The monoamines catecholamine and serotonin critically modulate neurophysiological functions affected in several neuropsychiatric disorders. They are synthesized by the enzymes

collectively termed aromatic amino acid hydroxylases. They are the primary therapeutic targets for many human diseases within neurology and psychiatry. We have focused on characterizing TH and TPH. Both TH and TPH bind to 14-3-3 proteins, and their interactions are important for the activity of the hydroxylases and these proteins are therefore also a focus of our research.

Tyrosine hydroxylase catalyzes the rate limiting step in the synthesis of catecholamine neurotransmitters and hormones and is a marker for dopaminergic neurons. Our group is caracterizing the protein based on structure, function, regulation by phosporylation and binding partners, in particular 14-3-3 proteins. We have made an important contribution to the knowledge of how TH is being regulated by phosphorylation and its binding to 14-3-3 proteins.

Previous studies have shown that 14-3-3s are involved in regulation of tyrosine hydroxylase by increasing the activity of enzyme and inhibition of enzyme dephosphorylation but the clear mechanism of these regulations are not clear yet. We will investigate this further and how it can effect the dopaminergic pathway in the brain.

Tryptophan Hydroxylase is the last member of the AAAH-family, consisting of two isoforms, TPH1 and TPH2. TPH1 is in the pineal gland and in the perifery, whereas TPH2 is the neuronal form. We have characterizes both forms based on solubility, activity, stability and regulation by phosphorylation.

TPH has been linked up to psychiatric disorders such as Bipolar disorder and ADHD, and it is important to know the characteristics of the enzyme to se the full effect of any mutation found in patients. We have so far characterized and analysed the effect of all known human mutations found in the TPH-gene. However, the link to psychiatric disorders is not yet clear and need to be investigated further.

A family of conserved regulatory molecules that are expressed in all eukaryotic cells. 14-3-3 proteins have the ability to bind a multitude of functionally diverse signaling proteins, including TH and TPH.

We have shown that 14-3-3 proteins bind to both TH and TPH and increase and stabilize the activity of  the enzymes. They are therefore important in the biosynthesis of both dopamine and serotonin.

We are also exploring the interactions between these genes in Norwegian patients with adult ADHD. We found that polymorphisms in the YWHA-genes (coding for 14-3-3 proteins) and their targets may exert a cumulative effect in ADHD.

Altered levels of the amino acid taurine have been reported in ADHD and autism. The related amino acid β-alanine, generated from aspartate, and its dipeptide derivative carnosine have also been proposed to have many health benefits.

We have expanded the knowledge for taurine and beta-alanine by providing new fundamental insights into the biosynthesis of these amino acids and their derivatives in mice and man, in particular regarding the roles of the biosynthetic enzymes CSAD and GADL1 at the cellular and organ level and determine their expression levels during pre/postnatal development. 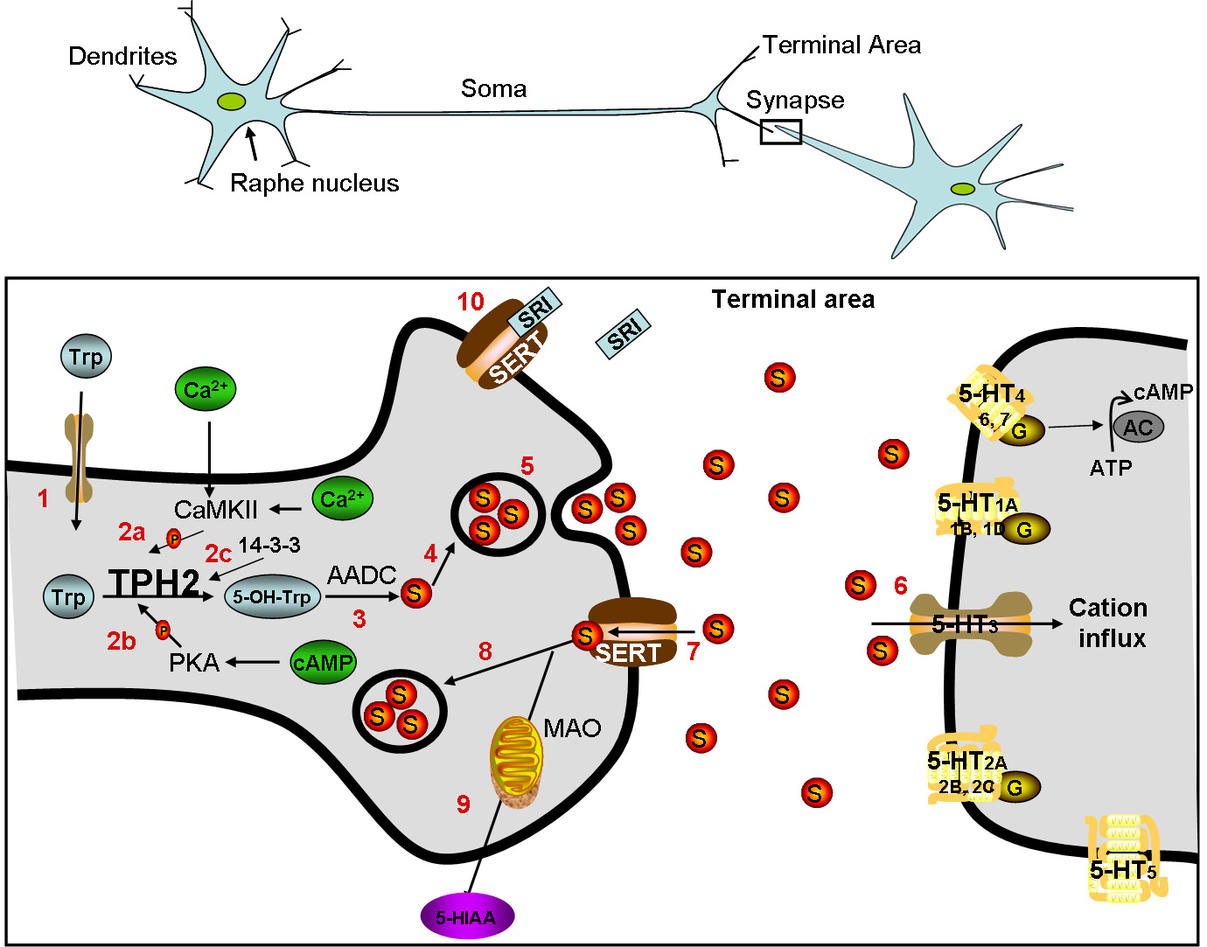