Researchers at MBI discover why vitamin B3 is essential

This week, researchers Nick Love, Nadine Pollak, Christian Dölle and Marc Niere from the Ziegler group report their discovery that the final step in the conversion of vitamin B3 to a molecule called NADP is critical for the embryonic development of animals.

The enzyme NAD kinase is responsible for the final step in the conversion of vitamin B3 to NADP (used collectively for NADPH and NADP+). NADPH is an important molecule, which connects metabolism and various defence mechanisms. These include the immune response, detoxification reactions and the "fueling" of natural antioxidant systems.

Researchers at MBI discover why vitamin B3 is essential

This week, researchers Nick Love, Nadine Pollak, Christian Dölle and Marc Niere from the Ziegler group report their discovery that the final step in the conversion of vitamin B3 to a molecule called NADP is critical for the embryonic development of animals (Proceedings of the National Academy of Sciences of the USA, PNAS). The study was conducted in collaboration with partners at the University College London and the University of Manchester. Molecular analyses of the enzyme which catalyzes the generation of NADP also revealed important insights into how NADP biosynthesis is regulated. These insights could be exploited for the development of new strategies to improve human metabolism, tissue regeneration and to counteract pathologies such as cancer. Together with Nathalie Reuter's and Thomas Arnesen's groups, Mathias Ziegler's group is part of MBI's research program ProtMetD (Protein modifications, Metabolism and Disease) with a major focus on disease-relevant mechanisms of metabolic regulation.

What is vitamin B3?

Metabolism relies on a set of molecules that provide the chemical framework for all cellular activities. Among these important molecules is NADP, a metabolite synthesized from vitamin-B3 (niacin and related compounds) that is particularly critical for basic metabolism, calcium signalling and anti-inflammatory processes.

Early studies revealed that vitamin B3 deficiency causes a disease called pellagra (from Italian: pelle = skin; agra = sour). The disease is characterized by dermatitis, diarrhea, dementia and ultimately death. Conrad Elvehjem, the child of a Norwegian family that had migrated to the USA, discovered in 1937 that nicotinic acid and nicotinamide cured black tongue disease, the canine version of pellagra. Subsequently, supplementation of the diet with niacin resulted in a near eradication of pellagra in the developed world. It was later found that vitamin B3 is a component of two molecules that are central to the metabolism of all living organisms, NAD and NADP. The majority of lower organisms (such as bacteria) produce sufficient quantities of niacin themselves, while higher animals and humans have only a very limited capacity and, therefore, need to take up niacin or nicotinamide with their diet (hence, the definition as a vitamin).

What are the major findings of this new study?

To study the role of NADP in an entire organism, the researchers used the frog (Xenopus tropicalis), a vertebrate animal for which genetic tools are available. They found that the gene encoding NAD kinase (the enzyme catalysing the synthesis of NADP) is essential for normal embryonic development. Blocking expression of this gene resulted in shortened body-lengths of the tadpoles and eventually death at an early stage of development. Biochemically, the strong down-regulation of NAD kinase activity led to decreased tissue levels of NADP, the essential end-product of vitamin B3 metabolism.

Both in sea urchins (lower, non-vertebrate animals) and frogs NAD kinase seemed to be highly expressed in the early immune system suggesting a key function of NADP in anti-inflammatory and other defence mechanisms during embryonic development. Molecular analyses of the NAD kinase protein revealed an evolutionarily conserved mechanism to modify this enzyme (shared between the human and one version of the sea urchin protein). This mechanism indicates exciting possibilities for the pharmacological targeting of NAD kinase for the improvement of human health.

Nick Love is now a researcher at the RIKEN Center for Developmental Biology in Kobe, Japan. Nadine Pollak and Christian Dölle have assumed postdoctoral researcher positions at the University of Stuttgart (Germany) and the Bergen University Hospital, respectively. Marc Niere continues studies of NAD and NADP metabolism in the ProtMetD program at MBI. 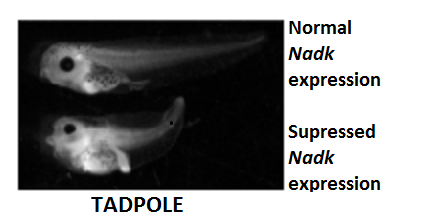