The Particle Physics Group at the Department of Physics and Technology conducts research related to a number of different international experiments. The research spans theoretical physics, experimental physics, detector R&D, and analysis of detector data.

Next
Large Hadron Collider at CERN in Geneva, Switzerland. In this 27-km long circle, protons are accelerated up to almost the speed of light and collide with each other. The energy that is released creates new particles that are detected by huge detectors.
Photo:
CERN
1/4
A view of the interior of the ATLAS detector
Photo:
CERN
2/4
The RD53A chip, which is being actively worked on by the Particle Physics Group. This is a prototype of a readout chip to be used in the inner part of the ATLAS detector when it is upgraded.
Photo:
Magne Lauritzen
3/4
Image illustrating all three classes of telescopes planned for the southern hemisphere.
Photo:
Gabriel Pérez Diaz (IAC)/Marc-André Besel (CTAO)/ESO/ N. Risinger (skysurvey.org)
4/4
Previous

Our Wiki-page contains useful informatiom on our group's activities.

ATLAS is one of four major experiments that break new ground in the exploration of matter, energy, time and space at the LHC accelerator at CERN. By exploring new physical phenomena and looking further into the microcosm than ever before, ATLAS will help us understand why the universe looks the way it does.

The Particle Physics Group does a lot of work related to the ATLAS detector. Many of our Master's students, doctoral students, and postdocs work on the  analysis of data that ATLAS generates. We also work actively on the development and testing of completely new detection technology that will be used when ATLAS is soon upgraded. We work closely with the University of Oslo, and in our detector laboratory, we test sensors produced at SINTEF in Trondheim and designed in Oslo.

EEE-network is a network of muon detectors distributed around Italy. The network's goal is to detect muons, elementary particles that are very similar to electrons but are heavier and short-lived. Muons are generated in the upper atmosphere, approx. 15km from the sea surface. This is because the Earth's atmosphere is constantly bombarded with cosmic radiation, which is comprised of high-energy particles from space.

In the Particle Physics Group, we have helped the EEE network build and install a new detector in Oslo. We also have our own muon detector that registers muons and their directions. There are opportunities for Master's and bachelor's students to work with this detector, which is called Lille My.

The International Linear Collider (ILC) accelerator is a proposed linear particle accelerator. The plan is that it will have a collision energy of 500 GeV to begin with, and later be upgraded to 1000 GeV. The location of this future accelerator is likely to be in Japan. The ILC will collide electrons and positrons to study the particles created by these collisions. IFT is working on the development of a detector called CALICE which, according to plans, will be installed around the interaction point of the ILC.

The BaBar-eksperimentet, or simply BaBar, is an international collaboration of more than 500 physicists and engineers studying the subatomic world at energies of approximately ten times the rest mass of a proton (~10 GeV). Its design was motivated by the investigation of CP violation. BaBar is located at the SLAC National Accelerator Laboratory, which is operated by Stanford University for the Department of Energy in California.

The Cherenkov Telescope Array, or CTA for short, is a next level gamma ray observatory currently under construction. It measures highly energetic gamma rays that hit the earth's atmosphere from space. By studying this data one can learn a lot about the objects in our universe and at IFT we are most interested in understanding what the mysterious "dark matter" is made of.The CTA observatory will consist of several tens of telescopes that will be the most advanced of their kind once completed. Therefore, wider spectrum of gamma-rays can be studied with higher precision once the telescope takes data.This leap in sensitivity compared to other telescopes can be the decisive factor to unravel the nature of dark matter! We will analyse the first data that is collected with CTA and try to find out what dark matter is made of. To  this end we collaborate closely with other Norwegian institutes that are involved in CTA. 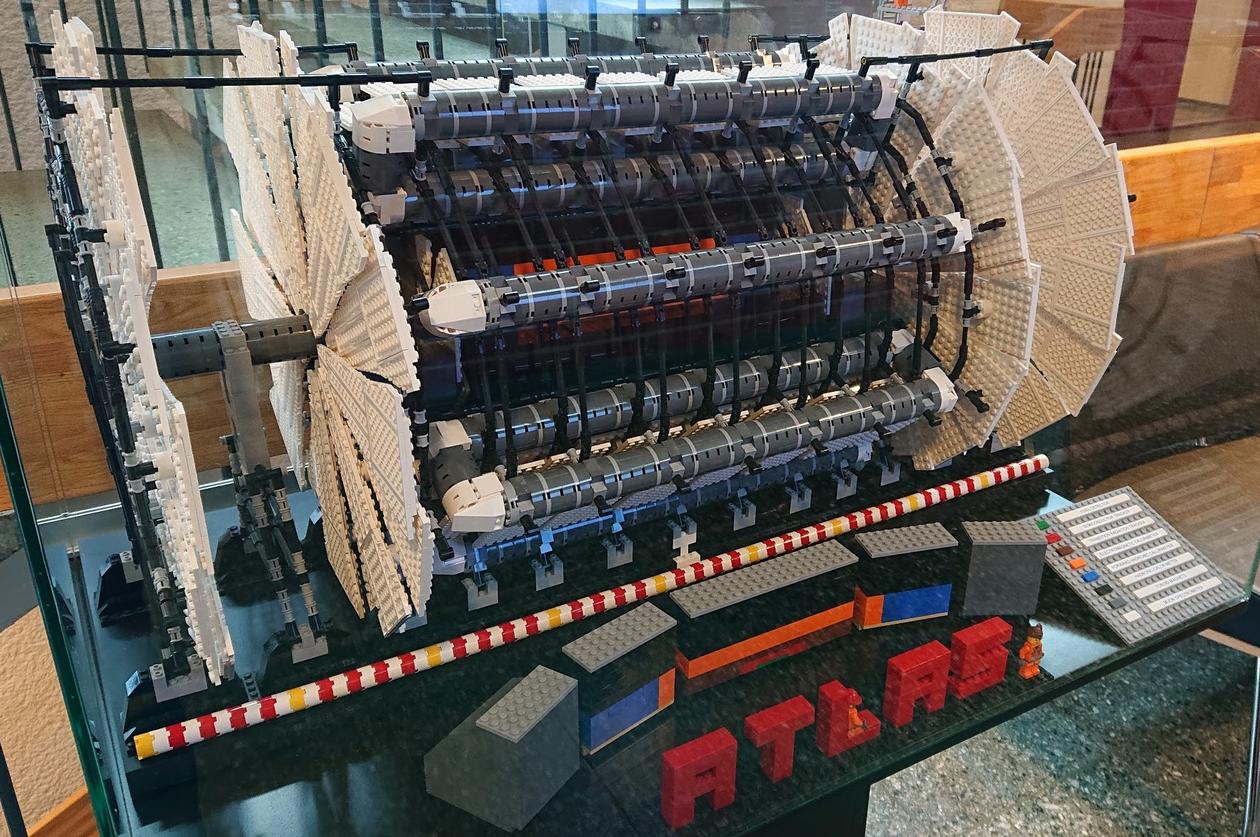 The ATLAS detector is the world's largest "general purpose" particle detector, and is over 7 storeys high. This is a LEGO model on display at the Subatomic Group's offices on the third floor of IFT.
Photo:
Magne Lauritzen 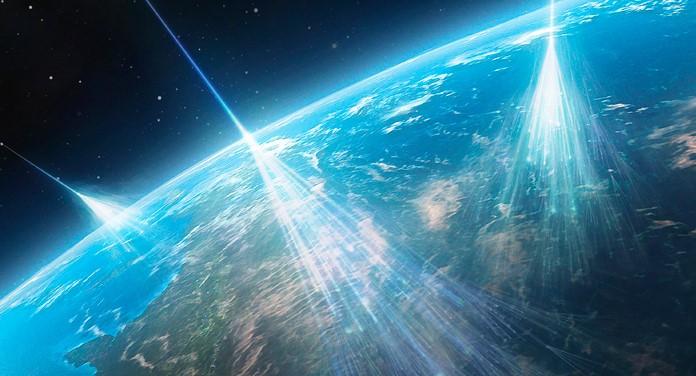 Visualization of cosmic radiation that hits the atmosphere and splits into a "shower" of particles. A large part of these particles are muons that can be detected at the Earth's surface.
Photo:
Ukjent 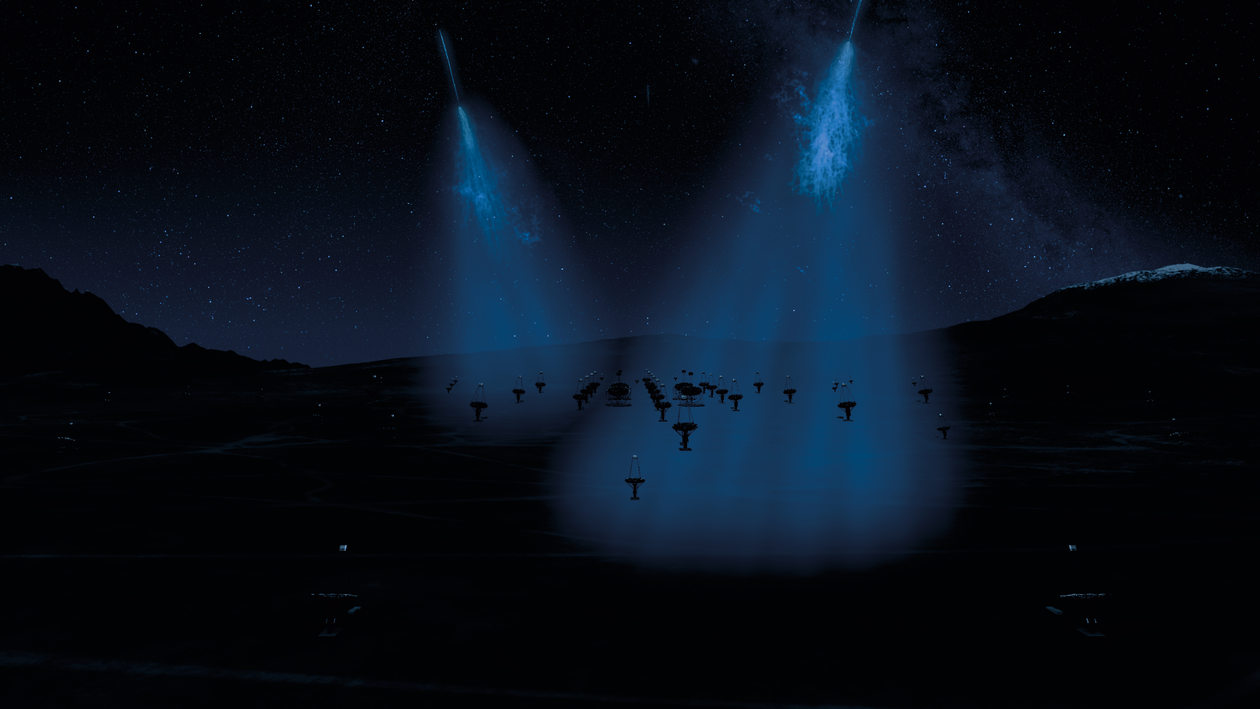