Jostein Gripsrud is editor of Relocating Television: Television in the Digital Context. Relocating Television offers readers an insight into studying television alongside the internet, participatory media and other technocultural phenomena such as DVDs, user-generated content and everyday digital media production. The book is the result of Gripsrud's Digicult project.

For over half a century, television has been the most central medium in Western democracies – the political, social and cultural centrepiece of the public sphere. Television has therefore rarely been studied in isolation from its socio-cultural and political context; there is always something important at stake when the forms and functions of television are on the agenda. The digitisation of television concerns the production, contents, distribution and reception of the medium, but also its position in the overall, largely digitised media system and public sphere where the internet plays a decisive role.

The articles in this comprehensive collection are written by some of the world’s most prominent scholars in the field of media, communication and cultural studies, including critical film and television studies. Relocating Television aims to describe, analyse and interpret a highly complex process of change. Avoiding the technology fetishism and technological determinism so prevalent in writing about digitisation and digital media, each article seeks an understanding of a key element in or aspect of the process. The book in its entirety thus delivers a critical account of the digitisation process as a multifaceted whole.

Relocating Television offers readers an insight into studying television alongside the internet, participatory media and other technocultural phenomena such as DVDs, user-generated content and everyday digital media production. It also focuses on more specific programmes and phenomena, including The Wire, MSN, amateur footage in TV news, Bollywoodization of TV news, YouTube, fan sites tied to e.g. Grey's Anatomy and X Factor. Relocating Television will be highly beneficial to both students and academics across a wide range of undergraduate and postgraduate courses including media, communication and cultural studies, and television and film studies.

Jostein Gripsrud is professor at the Department of Information Science and Media Studies.

Part IV: Critical perspectives
16. The cost of citizenship in the digital age: On being informed and the commodification of the public sphere - Peter Golding
17. Networking the commons: Convergence culture and the public interest - Graham Murdock
18. Smart Homes: Digital Lifestyles Practiced and Imagined - Lynn Spigel
19. Television as a means of transport - David Morley 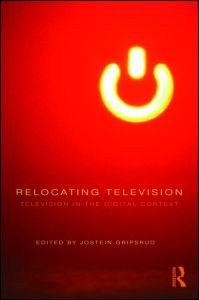