Marks and Hooghe built their lecture on Rokkan’s profound analysis of peripheral community. They discussed how distance, difference and dependence of territorial communities endure within a state.

Professors Liesbet Hooghe and Gary Marks argued that territorial minorities may not only gain self-rule but also shape the entire structure of governance in states of which they are a part in this year’s Rokkan lecture.

The 2016 Stein Rokkan Memorial Lecture was presented by eminent political scientists Professors Gary Marks and Liesbet Hooghe on the 21st of September in The University Aula. Stein Rokkan’s work plays a large role in their research on regions.

Marks and Hooghe argued that territorial minorities may not only gain self-rule but also shape the entire structure of governance in states of which they are a part.

Rokkan regions
They distinguished between the two types of “Rokkan regions,” peripheries and failed cores. The former can be characterized as isolated (distance) with a small population (difference) and self-rule (dependence). The latter can be described as accessible, with a large population and shared rule.

The Regional Authority Index
Marks and Hooghe presented The Regional Authority Index, an annual measure of the authority of regional governments across ten dimensions that constitute two core domains of authority: self-rule and shared rule. They imagined that Rokkan would have had a field day with their data set, which covers 81 countries between the years 1950 and 2010.

Liesbet Hooghe and Gary Marks
Liesbet Hooghe and Gary Marks are two of the world’s leading political scientists. They have distinctively shaped contemporary political science and contributed to the development of knowledge on issues such as the regionalization of politics and multi-level governance. They developed the latter concept in their writings in the early 1990s and received an ERC Advanced Grant to study the “Causes and Consequences of Multilevel Governance.”

Marks is the Burton Craige Distinguished Professor, and Hooghe the W. R. Kenan Distinguished Professor, at the University of North Carolina at Chapel Hill. Hooghe is, in addition, an Elected Fellow of the Flemish Royal Academy of the Arts and Sciences. Together with Walter Mattli, they are editors of the Oxford University Press book series “Transformations in Governance.”

Stein Rokkan Memorial Lectures
Professor Stein Rokkan was an international pioneer in comparative politics and political research. In 1966 he was appointed professor of sociology at the University of Bergen with special responsibility for developing the field of comparative politics. He is particularly known for his contributions to the research on national states and democracy.

The Stein Rokkan Memorial Lecture is an annual event hosted by the Department of Comparative Politics since 1981. 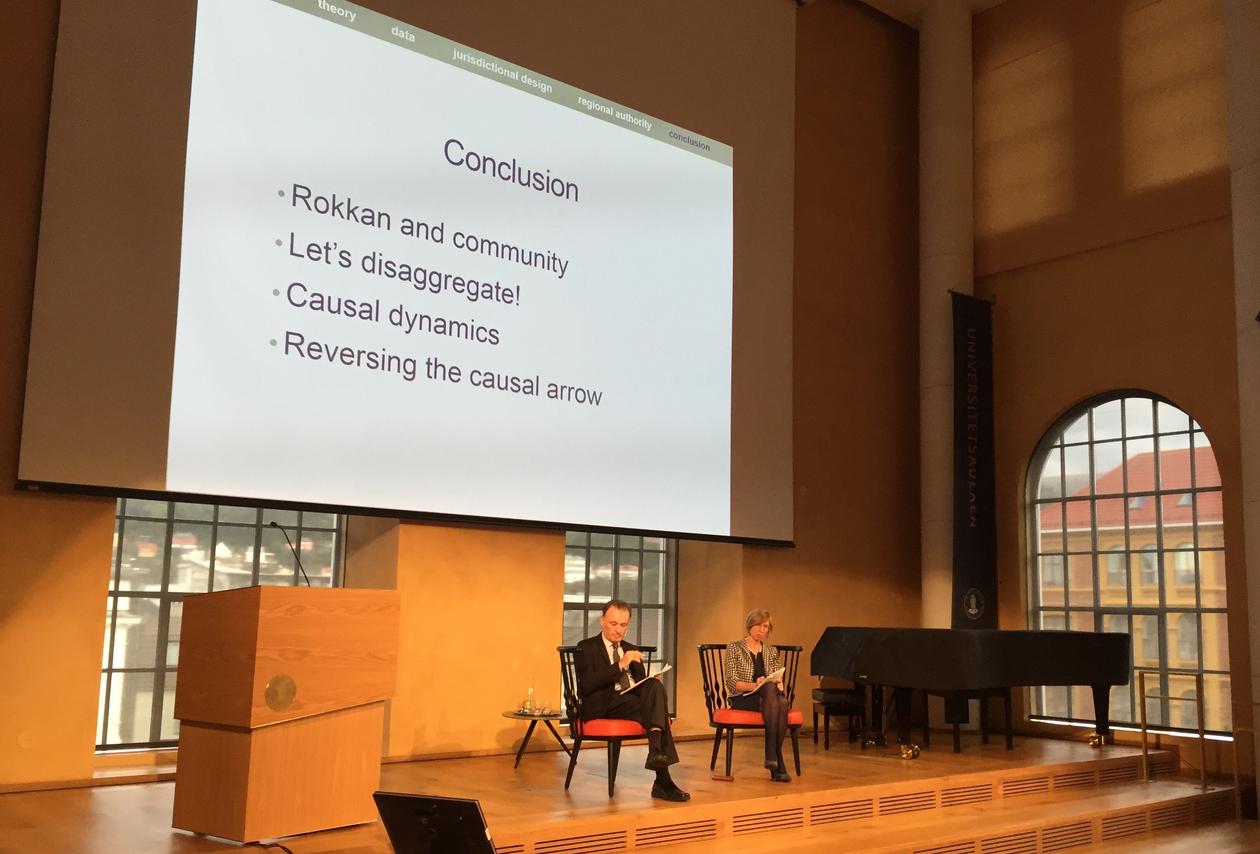 The lecture concluded with a q&a session.