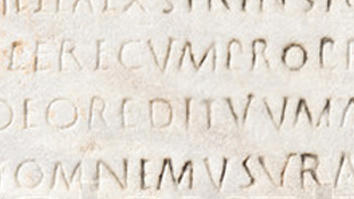 Classical studies are a combination of different subjects such as Latin, Greek, rhetoric and ancient cultures.

How did Athens become a centre for philosophy, art and literature? How has modern democracy been influenced by our inheritance from the Greek city-state? Why is Greek mythology still an important source of inspiration for artists and authors?

How could the city-state of Rome conquer all the countries in the Mediterranean area? Why are Roman discourses still considered to be examples of effective communication. And why was Latin so important in our schools right up to the current time?

Are these questions that interest you? If so, then Greek or Latin might be something for you.

... the New Testament was written in Greek? So was most of the early Christian literature during the first and second centuries. This is why Greek is also important for theologians and experts on religion.

... early Norwegian history was written in Latin at the end of the 12th century. The author called himself Theodoricus, which probably means Tore or Tjodrek in Norwegian.