The professor who changed his branch of science

Despite being Professor Emeritus, John Birks has no plans of slowing down. He hopes to continue his research activities for many years.

“I so enjoy what I am doing. I greatly enjoy my contact with young students and younger researchers. I do not work as hard as I used to, but I still have several ambitions”, says John Birks, professor emeritus at the Department of Biology.

Birks has specialised in pollen analysis, vegetational history, and quantitative palaeoecology. His PhD degree is from the University of Cambridge.

He and his wife Hilary Helen Birks both came to Bergen in 1985. Hilary is also a distinguished researcher in the field of palaeoecology and climate research.

“One of the main reasons that we moved to Bergen was, in Britain, my wife would never be able to follow her scientific career, something she was able to do in Norway. We decided a change of scene would be good for us, and have had no regrets at all,” Birks says.

Throughout his career, Birks has maintained close contact with British researchers. He has also cooperated closely with his wife, a cooperation he describes as wonderful.

“I am very fortunate to have common interests with my wife: she enjoys her science as much as I do. We have had no problems working together, though she sometimes thinks I work too much. And I sometimes think she works too much,” the Professor says.

Birks is a professor in quantitative paleoecology, using data from fossils to reconstruct quantitatively the ecosystems of the past. He is among the first in the world to use numerical methods in pollen analysis.

He has also investigated plant tolerances in different types of past climates, creating climate simulations. Some of the simulations dated back 12,000 years, and have shone a light on how ecosystems varied in the past and how they may change in the future.

In 2015, participants from several countries attended his anniversary seminar in Bergen, as well as contributing to a special issue of the scientific journal The Holocene, entitled ‘At the frontiers of palaeoecology: A special issue to honour H. John B. Birks’.

In 2012, he was presented with a Lifetime Achievement Award in Palaeolimnology, and was lauded for transforming the branch of science in the 1980s.

"The techniques he introduced have now become standard in probably every palaeolimnology laboratory in the world. It is hard to fully appreciate John’s legacy in this regard, except to say that his contributions and influence were enormous," Biologist John Smol said at the presentation.

The dynamic of science

He says to be respected by his peers is one of his greatest moments as a researcher thus far.

“On a more mundane level, I realise that I have contributed in changing my branch of science from a descriptive subject towards a quantitative and analytical subject. In my fifty years as a researcher there has been a major shift in the science of palaeocology.”

His advice for younger researchers is to do everything as well as they possibly can.

“Do not worry that something you did earlier is being criticized, changed or overtaken. I sometimes read something I worked on in the 60s, and just go “ugh”. We never like to be proven wrong, but science has to move on. That is science; dynamic!” 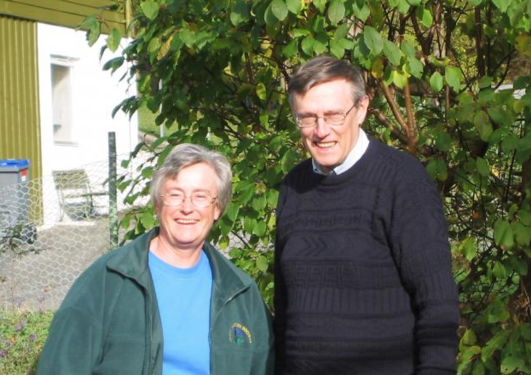 A world of pollen and numbers

John Birks turned 70 in January. In March colleagues from Bergen and abroad honoured him with an anniversary seminar "At the Frontiers of Paleoecology". 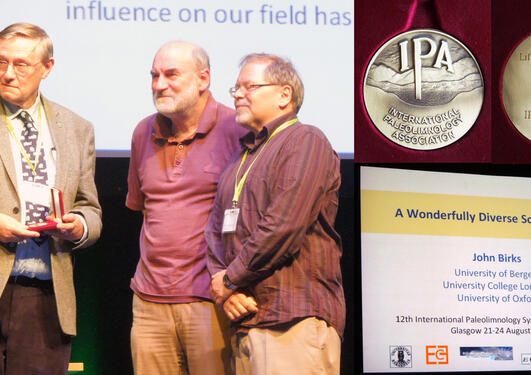 John Birks was presented with a Lifetime Achievement Award in Palaeolimnology at the 12th International Paleolimnology Symposium in Glasgow.