More and more cruise ships visit the fjords of Western Norway. But cruise tourists only spend a fraction of what other tourists spend.

– The average camping tourist leaves behind twice as much as the average cruise ship tourist. And this even when one excludes costs and taxes for camping, says Professor Svein Larsen of the University of Bergen’s Department of Psychosocial Science.

Larsen has conducted a comprehensive survey of tourism in Western Norway, and recently published his results in the article Belly full, purse closed in the journal Tourism Management Perspectives.

Larsen has been pioneering studies into how much revenue cruise tourism actually contributes to the local economies visited by cruise ships. Over the last three years, Larsen has spent his summers interviewing more than 8,000 tourists; of which 1,300 were cruise ship passengers.

– The result is clear, says Larsen. – Cruise tourists spend the least money of all types of tourists.

Larsen’s research shows that the average cruise tourist on average spends about NOK 300 a day onshore. Between 20 and 40 per cent don’t even leave the ship. Half of those who leave the ship spend less than NOK 250 onshore.

In comparison, the average camping or hostel tourist spends twice this amount. The average family tourist, who stays in a hotel, tops the spending list with an average spend of NOK 1,000 a day. This comes on top of paying for the hotel room.

The psychology professor believes that the low spend per cruise tourist is down to budget cruise offers on an all-inclusive package. A six-day cruise of the Norwegian fjords may cost as little as €220. The same journey by air travel and individually arranged accommodation will usually set you back several times that amount.

– Taking a cruise is the new mass tourism, Larsen believes. – The tourists are fed onboard and even do their shopping onboard.

Also, the cruise industry needs to make money. It is not unusual for cruise tourists to be let offboard for a maximum of eight hours per onshore visit.

The only locals profiting from the cruise ships are the port authorities, and also occasionally tourist guides and industries built specifically to cater for the cruise ship sector. Only limited resources reach public toilets, local shops, or tourist attractions, according to Larsen. He believes local authorities need to rethink their policies on tourism.

– Maybe local authorities need to focus more on sustainable tourism, he suggests. – Young people and families spend a lot of money when on holiday. Cruise tourists, on the other hand, will rather visit a non-entrance fee museum rather than, say, the Bergen Aquarium, where you have to pay an entrance fee.

There are some categories, though, where cruise tourists spend more than other tourists: cafés, sightseeing, and shopping. On average the cruise tourist will spend NOK 50 a day in each of these three categories.

– This is not sustainable tourism, Larsen believes. – There may be queues when the cruise tourists visit town, but they don’t leave much behind for the local economy.

Other research also shows that there may be a negative environmental impact from the cruise ship industry. 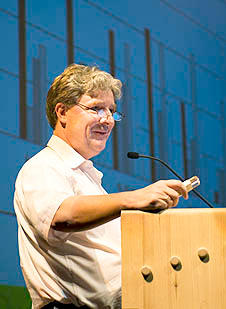