CHANGES: This is how the UiB logo has changed over the years.
Photo:
UiB

A few years after Bergen Museum, now the University Museum of Bergen, was established in 1825 there followed demands to find a symbol for the young institution. Thus in 1839, the Eurasian eagle owl was picked as the symbol and logo for the museum.

When the University of Bergen (UiB) was officially established in 1946, the university assumed the owl for its logo. But why was the owl such a natural choice for the museum and later UiB?

“The Eurasian eagle owl may not be as wise as people first believed, but it has long been a symbol of wisdom to human beings,” says Jo Høyer referring to Norwegians’ traditional beliefs inspired by nature.

Høyer is an adviser at the University Museum of Bergen and has been fascinated by the owl and the UiB logo for many years, something he holds in common with many at UiB, including this magazine. After all, the name Hubro is the Norwegian name for the Eurasian eagle owl.

So, the Eurasian eagle owl may not be particularly intelligent compared to other birds. On the other hand it has tremendously good eyesight and hearing, and is famous for being a nighttime predator.

But maybe it’s the human-like facial features of this wide-eyed bird that has particularly endeared it to people throughout the ages. This may help explain why it has become a symbol for wisdom.

“In ancient Greece, the owl was associated with the goddess of wisdom, Pallas Athena,” Høyer explains.

When Professor J. C. Dahl went about creating Bergen Museum’s first seal, the owl was in place, and has remained the symbol of knowledge and higher learning at the museum and UiB since then.

”Dahl included both the Norse and ancient Greek culture when he created the symbol. In the most widely used logo in Bergen Museum’s history, the owl sits on a rock marked with Urda in runic writing,” says Høyer.

In Norse mythology, Urdarbrunnr is a well that lies beneath the world ash tree Yggdrasil of Asgard. The tree actually has one of its roots in the well, according to the Prose Edda written in the thirteenth century by Snorri Sturluson. Next to the well the three Norns – Urd, Verdandi, and Skuld – spin the threads of life.

Urd was the Norn of wisdom, and starting in 1834, Urda was also the name of the first print series published by Bergen Museum.

From stamp to seal to symbol

In 1894, museum director Jørgen Brunchorst put together a proper logo for Bergen Museum. In this logo, the eagle owl was perched on top of the Urdarbrunnr well, whilst the characteristic castle symbol of the City of Bergen and her seven surrounding mountains are included above the owl.

This logo proved so successful that it was in use until 1948, after the creation of the university itself.

In its first few years, the new university used only a stamp without the characteristic owl. But gradually the need emerged for a proper seal. Thus in 1950, the goldsmith Trygve Eriksen created a new UiB logo based on the original museum logo. He also moved the owl from the Norse well to sit atop the Seven Mountains.

“From our point of view today, the 1950s logo was a modern logo ahead of its time,” says Høyer. “Over the years the logo has become increasingly more stylised and today it has a minimalist graphic design, although it is still obvious what it is and who it represents.”

A logo for the future

Curiously, over the years the Eurasian eagle owl has become ever more dear to both UiB staff and students, but also to the greater community in Bergen, who clearly see the fortune of this increasingly rare predator bird as an extension of the hardship found in traditional life in the west of Norway.

“Symbols are important for people. A trademark such as the UiB logo has value in its own right,” Høyer believes. “Also, the logo, which predates the university, clearly shows the link back to the museum and thus the heritage of UiB.” 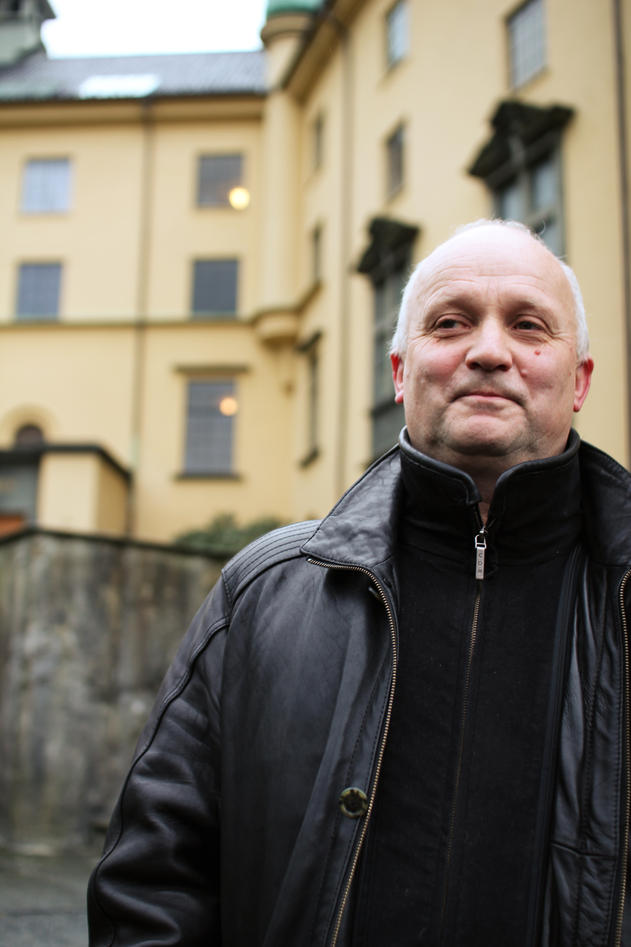