There has not been added a translated version of this content. You can either try searching or go to the "area" home page to see if you can find the information there
learning and decline of the languages of Syrian refugees in Norway after the Arabic spring

Main objective and summary of the project

Due to the war in Syria, more than 6 million Syrian nationals have been forced to leave the country since 2011 and around 30 thousand Syrians and their descendants live in Norway in 2019. When it comes to language training many refugees participate in an “introduction programme”, which includes training in Norwegian . English is also used or acquired for general communication with the local population to enhance chances on the job market. This project aims to shed a light on the changes that occur in the mother-tongues (Arabic and its dialects) of those Syrian refugees when coming into contact with Norwegian. By looking at Norwegian loan words in Syrian adult speakers in Norway, the proposed project aims to add to the literature on language contact and change. The Syrian society in Norway starts to face new phenomena (in all 4 skills; reading, writing, speaking, hearing). Adults struggle to integrate with the Norwegian society, and the main wish for them is speaking the language as would a native Norwegian. After the Arabic spring a new problem (phenomenon) appeared: the children of Syrian refugees start to mix Norwegian with their mother tongue.

For example, in vernacular Arabic, the word "intro" is an abbreviation from the Norwegian "introduksjon" (introduction program for refugees),

'I will start with the introduction program'

By observation, the word "praksis" (practice) from Norwegian is more used than "tadriyb" from Arabic, especially when spoken in colloquial Arabic. However, they use "tadriyb" in writing.

'I practice in every day'

The core research questions in my project are:

1) Which kinds of loan words (verbs, nouns, adjectives, …) from Norwegian can be found in the daily speech of Arabic speakers from Syria?

3) To what degree do Arabic schools in Norway help to maintain a native level of Syrian children in Norway?

The main goal of the proposed project is to meet these challenges head-on and to generate new research:

QA) Determine how many loan words there are in the Arabic of Syrian speakers in Norway.

QC) Measure language change, and code switching in the spoken and written Arabic of Syrian immigrants.

QD) Assess the roles of Arabic language schools in Norway in teaching Arabic for Syrian refugees.

The core hypothesis is that the Arabic of Syrian speakers contains a significant amount of loan words from Norwegian with a loss of Arabic vocabulary.

Background to the project & Theoretical framework

Arabic is spoken by over 422 million people primarily in Middle East and Arab countries (Bouchentouf, 2018). In addition, these large numbers can be considered encouraging in the face of increasing language loss between the emigrant’s speakers in Norway. Among the foreign languages spoken in Norway in 2012 Arabic was the second language (11,489 speakers) after Serbo-Croatian (UDI 2012) Now it is the most common first foreign language spoken in Norway (more than 34000 speakers) because of the Arab spring immigrants.

The first point to consider is that non-standard dialects of Syrian refugee speakers of Arabic are both under-documented and under-studied in Norway. The research will focus on both dialects and standard Arabic in Bergen & Oslo and others towns in Norway. In my research, I depend on the following resources: Sociolinguistics (Bassiouney, 2009). Grammars (Chacra, 2007), (Aoun, 2010), (Bouchentouf, 2018). Dictionaries (Al-wer, et al, 2009), (Abd Al-rahiym, 2012). Theoretical research (Koomen, 2017), (Podesva, et al 2013). Arabic dialectology (Holes, 2018), (Al-Masri, (2016), (Boberg, 2018). Teaching of Refugees (Kalupe, 2017), (Wahba, 2018), (Haarstad, 2015). Syrian crises and refugee (Gilbert, 2017), (Yassin, 2018), (Richmond, 2017), (Yassin et al 2018). Differences across Arabic dialects have been noted in a small but growing number of studies such as (Abd Al-rahiym, 2012). Another point is finding the difficulties for emigrants to teach Arabic to their children, the conflict of self, identity, patriotism and nationalism, and its impact on learning Arabic and learning Norwegian.

To advance documentation and research on the under-studied Arabic standard as well as dialects the targeted dialects for the fieldwork are: Shami, Halabi, Jabali, Daraa, Deri, and Homsi. These Arabic dialects are also chosen given that they represent larger cities/communities in the refugees' home country.

I will carry out open interviews to establish the scope of the research. The fieldwork of this project and resulting works represent an important advancement in language documentation and the comparative study of Arabic dialects and the effect of Norwegian on them. The place of study will be Bergen, Oslo, Trondheim, Kristiansand, Bodø and Mandal with a possible extension to smaller towns in Norway, by using interviews and storyboards (both adults and children, I need to use them in order to force them to reply for a specific topic and by that, I can examine their language). For the adults the interviews mainly will be the school of refugees in Oslo and in Bergen also long observations will be hold to collect the data. The plan is to make 50 to 60 interviews and each interview from 30 to 45 minutes, they will be recorded. The research will result in statistics and diagrams, using a combination of sociolinguistic methods and theoretical frameworks. The project seeks to strengthen the knowledge base on the linguistic and social impacts on individual refugees, the interactional and the societal levels, and thereby complementing research anchored in the field of humanities.

The questions in the interviews in general the research will ask them questions about their feeling about language her, their experience with language of talking with others, their attitudes to load words from Norwegian, the fieldwork could be in cafe, school, and internet discussions as in Facebook.

The main questions in the interviews will be:

1 - How do you feel talking Arabic to Syrians?

2- What do you feel about using Arabic in Norway with others?

3- what do you feel that Arabic are losing the power? …  in work, school, life…etc.

4- Are you willing to continue speak Arabic? And why? (for Adults and children)

5- What do you think about people mixing Norwegian in Arabic?

6- Can you tell me which Norwegian words people, or you put in everyday Arabic? (invarious domains, school, shopping, playing, cooking … etc.)

The documentations will be classified based on gender age, level of school, and the parts of Syria they came from. And can be put in groups:

I started with the interviews on language attidtudes and beliefs. And I will publish tow or more artcles on this before you go on to the second stage.  Alongside the interviews the research will analyze the writing of refugees in schools, social media in Facebook, internet discussions, and will document them, by collecting the words and sentences and analyzing them in different topics such as politics life, social life… etc.

The project started in practice the main fieldwork in Bergen city, as pilot study, and the questionnaires updated many times until they got the final forms.

The research out of Bergen started in Kristiansand and Mandal, I visited many schools and families, and I made many interviews in these houses, and may deep thanks and gratitude to my formal  M.A student Tarik Al-Khaled and his brothers (now he is doing PhD) they helped me to contact with the Syrian families in these two cities.

The project will continue in other cities: Tromsø, Oslo, Trondheim …etc. and the updates will come soon.

Where can I find out more?

Here one example of one of the interviews with one of the student, his name is Ghaleb Marey  غالب مرعي , 10 years old, he lives in Mandal, and came to Norway when he was 5 years old. (we make this interview public after his parents’ permission) 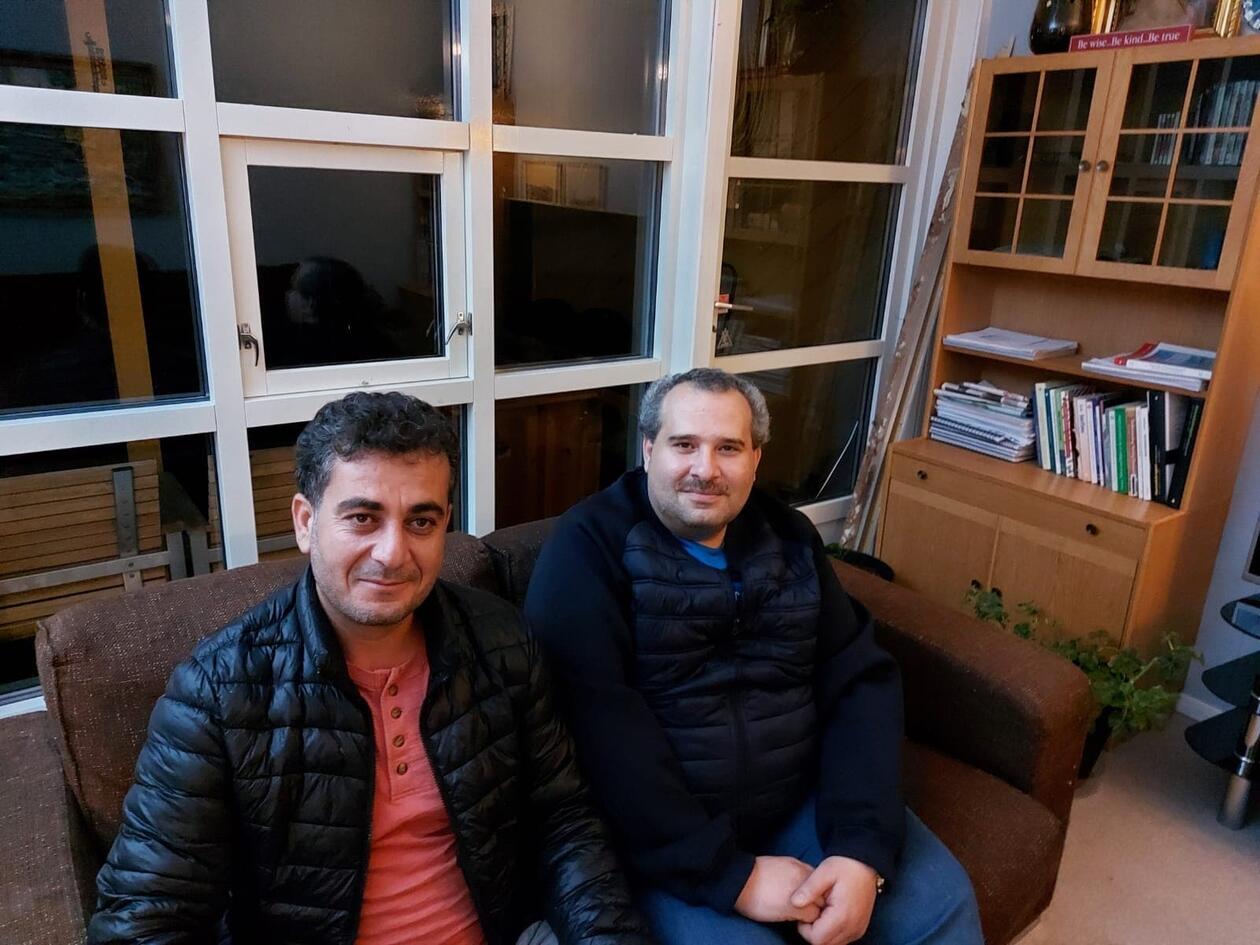