Digital Art and Literature at the University Library Café

In November and December visitors to the University Library will experience electronic literature and digital art created by Jason Nelson, the 2016/17 Fulbright Scholar in Digital Culture at UiB, and his partner, Alinta Krauth.

Morphing sentences and moving images of a digital city are projected onto the windows above the coffee shop in the University Library.
Photo:
Alvaro Seica

"We want to put art in places where people spend time," the artist duo explain. We are standing at the entrance to the library, watching one sentence morph into another, letters moving, disappearing and appearing. Each sentence tells a little of Jason Nelson's experience in moving to Bergen.

"I found the contrasts striking: between the city we moved from, with its tall buildings and vibrant sunshine, and the low buildings and rainy mountains of Bergen," Nelson explains. He is a US citizen, but has lived in Brisbane, Australia, for the last several years, teaching at Griffith University there. His partner, Alinta Krauth, also teaches at Griffith, and they are both recognised digital artists. They arrived in Bergen in August 2016, and will stay here until the end of the spring semester in 2017.

The University Library installation is called "Bindings," and is part 1.0 of a planned Bergen Trilogy. Other installations in the trilogy include a planned projection work at Bergen Public Library, and another where artwork will be projected onto the mountain Fløyen.

The work that he and his partner Alinta Krauth have installed at the University Library is constantly in motion, and as we talk, we notice how people sitting in the café watch the images and words as they change. The words describe a Bergen in ways that sometime seem contradictory, but that are interwoven by the morphing effect where the letters in one sentence are repositioned to shape a new sentence.

The works that are displayed will be changing every few days. This first work was made by Nelson, and a work by Krauth will be put on display on November 12. They will continue to change out the works both using art and poetry they have already created for the show, and writing new works during the time Bindings is on display.

The Fulbright Program aims to increase mutual understanding between the peoples of the United States and other countries, through the exchange of persons, knowledge and skills. Every year, Digital Culture at UiB receives a Fulbright Scholar who teaches undergrad and graduate courses. 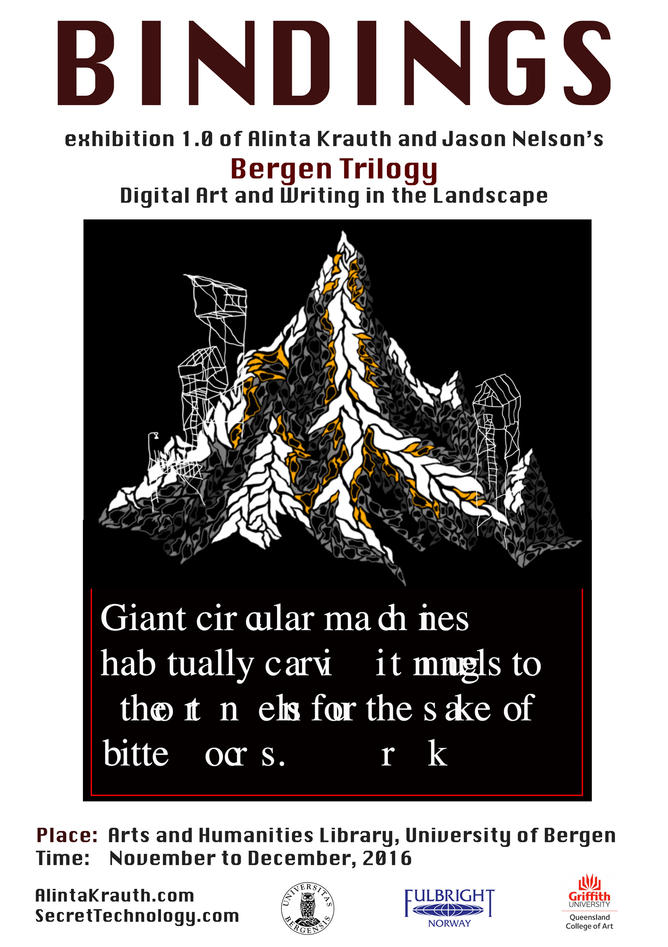 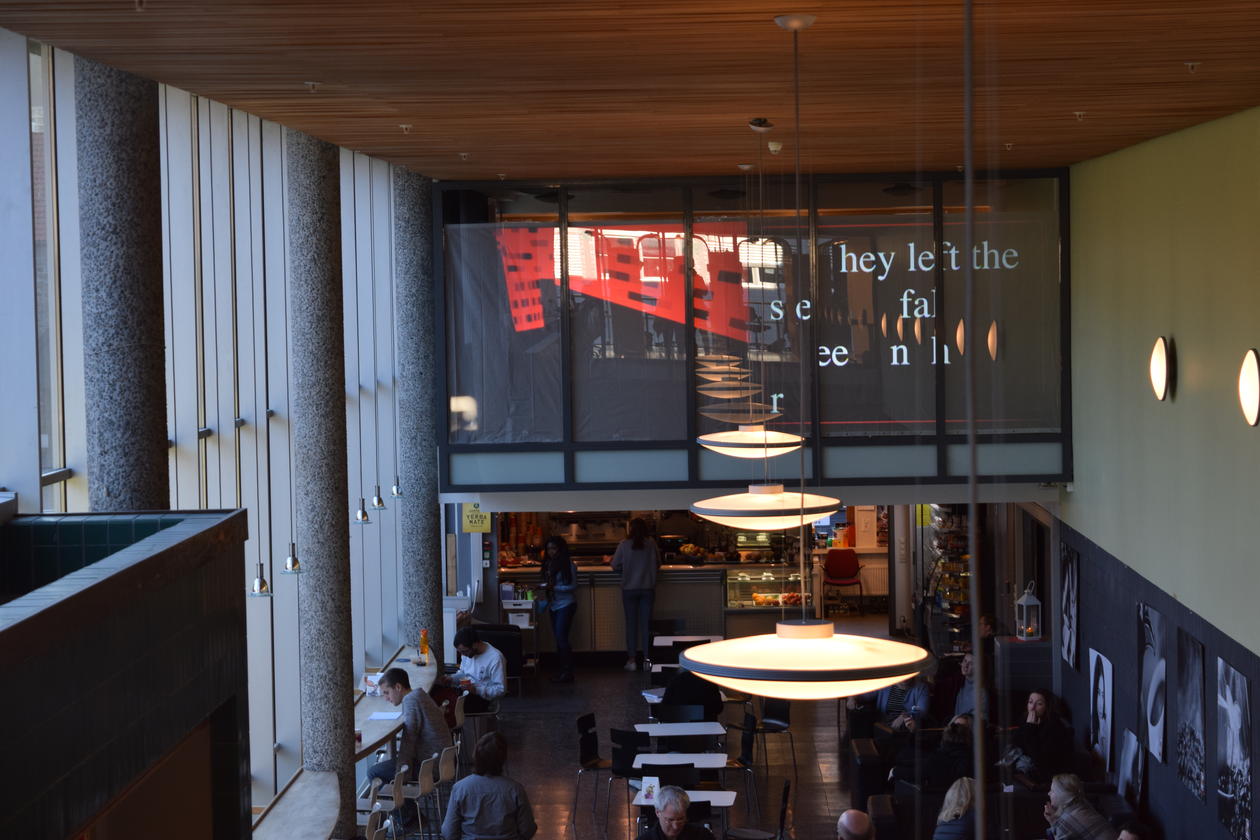 The projection fills the wall of windows above the café.
Photo:
Alvaro Seica 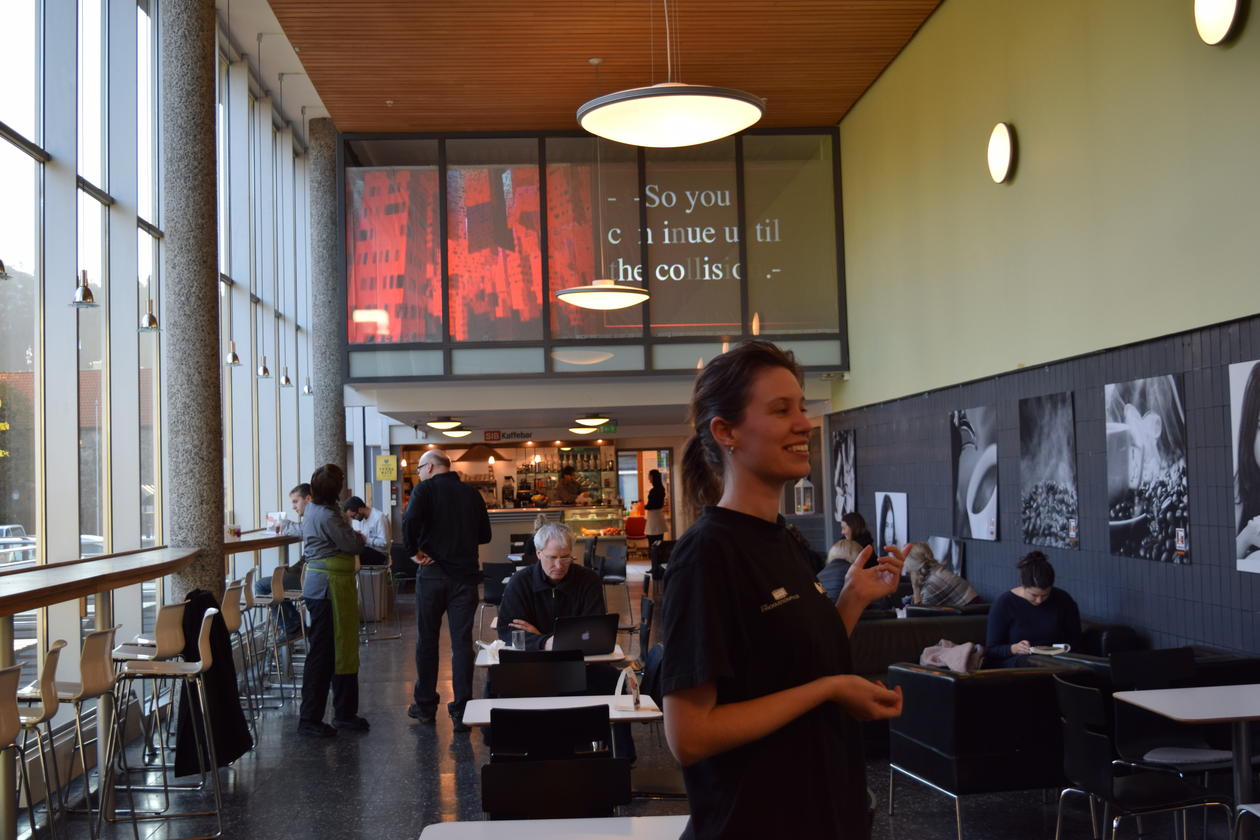