Using salmon to learn more about our brains

Learning more about the changes that occur in the brain of salmon during smoltification may give us insight into the plasticity of our own brain.

These two immunohistochemistry images show salmon brains. The brightly coloured areas show neurotransmitter systems, CRF (green) and dopamine (red). The brain on the left is from a fish that has undergone a treatment of continuous light and was therefore not stimulated to undergo “normal” smoltification brain changes such as can be seen in the control fish brain on the right.
Photo:
Lars Ebbesson

The transformation of young, fresh-water based salmon (parr) into ocean-going juveniles (smolt) is an incredibly complex process. It involves numerous biochemical, physiological, morphological and behavioural changes. These changes are under neural and endocrine control.

For decades researchers have been trying to gain better understanding of the factors affecting smoltification.  Not only is it a fascinating biological process – but better understanding can lead to more effective aquaculture practices. In addition, basic research on salmon smoltification can provide insights into basic biological processes that are relevant to all vertebrates, including humans.

The many years of collaboration between researchers and the aquaculture industry combined with current advances in technology in technology have made it possible for a team of researchers to propose a new research project that will explore how salmon brains change during smoltification. The 3-year FRIBIOMED project is led by Sigurd Stefansson from the Marine Developmental Biology research group at BIO and Lars Ebbesson, leader of the Integrative Fish Biology group at Uni Research AS. Partners on the project include Clive Bramham, Department of Biomedicine, UiB, Simon Mackenzie from the University of Stirling and Aleksei Krasnov, NOFIMA MARIN AS, the food research institute. The project is entitled: The Smolt Brain Model: Unravelling nature’s regulation of neural plasticity.

The project aims to gain better understanding of the molecular mechanisms involved in regulating the salmon brain’s neural plasticity during smoltification. Indications thus far are that there is an unexpectedly high degree of plasticity in the juvenile salmon brain during this period. This contradicts conventional beliefs about whether brain development after the earliest life history stages was even possible (see the Fact Box on Brain plasticity).  However, during smoltification – a mid-life juvenile state for salmon – it seems that the brain undergoes a period of dramatic structural and chemical change. Somehow, explains Ebbesson, it is as though the smolt brain “wants” to change!

The story behind this project begins many years ago. It actually spans over two generations of researchers. Sven Ebbesson, Lars Ebbesson’s father, a well-known comparative neuroanatomist and now Professor Emeritus at the University of Alaska, no doubt fired second generation Ebbesson’s research interests into neuroscience. Perhaps the son was also influenced by the tragic accident of one of his friends, who broke his neck during their under-grad years.  At any rate, Ebbesson (Jr.) chose to continue with post-grad studies initially doing 2D-electrophorisis to study how proteins in the brain change. Nearly 20 years ago, the technology available to identify these molecular changes was severely limited in comparison with today’s high-throughput, highly automated, and “omic” methodologies, e.g. transcriptomics. Frustrated, Lars Ebbesson decided that it was better to wait for the technology to advance and instead worked on characterising the salmon brain model and learning how brain changes are associated with endocrine and physiological changes. This current project is the culmination of 20 years of Ebbesson´s research and his search for what triggers and regulates the salmon brain to become so plastic, mid-life.

In the mid- to late 90’s Ebbesson began a collaboration with Stefansson as part of his PhD work at Lund University. This work continued when Ebbesson moved to Bergen in 2000 to learn more about endocrine control of salmon physiology with Stefansson using the Bleke salmon population. This population has been landlocked for “only” around 9000 years. Ebbesson explains that this is not long enough for significant genetic changes to have taken place. These fish thus have the “wiring” for smoltification processes, they just do not respond to the environmental triggers that initiate the process in “normal”, ultimately ocean-going smolts. He explains that this provides researchers with a unique research opportunity for studying the neural and endocrine feedback and initiation loops involved in smoltification. What is turned “on” for the ocean-going populations but is repressed in Bleke? And why? (Read more about the Bleke population in the Fact Box).

Stefansson says that the “Smolt Brain Model” project is a truly integrated biology project. Not only have technological advances made it possible to address questions that scientists could not have dreamed of tackling a few short decades ago, but the team also benefits from being able to integrate decades of salmon and fish research in a multitude of different disciplines. In addition, they have the Bleke salmon to use as a model population in their work.

Ebbesson points out that the smolt brain may turn out to be an excellent model for vertebrate brain plasticity studies because few vertebrates undergo such a comprehensive transformation mid-life, as well as the fact that, practically, the actually size of the smolt brain is perfect – large enough to easily give enough tissue samples for the research work.

The thumbnail pictures included with this article show a number of fish brain images. You can click on each one to access a larger image.

The second picture above shows a smolt brain where the yellow area is activated and potentially plastic – that is, potentially able to re-structure and change. Note what a surprisingly large portion of the brain is actually potentially involved!

The third picture shows several different images of smolt brains where the tissue has been treated so that newly formed neural fibres show. Click on the picture to learn more about the images.

The fourth picture (also shown below) is similar to the second, but the tissues this time have been stained to show newly formed brain cells.

This visual evidence of neural plasticity is exciting – but what controls these processes? That is the goal of this project. The team hopes to assemble the results of the previous decades’ work, together with the latest in molecular technology to unravel the looping cascades of endocrine and neural reactions and responses.

The results of this project may also provide insights into the neuroplasticity of other vertebrates, including ourselves, as well as contributing substantially to better understanding of the smoltification process.

FRIMEBBIO is one of the FRIPRO initiatives from the Research Council of Norway (RCN). The FRIPRO web pages tell us that:

New knowledge is often generated in unforeseen ways and in unexpected areas. Broad-based, independent basic research is therefore a prerequisite for all other research, for future industrial development and for policymaking. Thus the FRIPRO funding scheme has an important role to play in strengthening Norway’s national knowledge base.

The “Smolt Brain Model” is clearly a project that embodies these goals.

Smoltification consists of a number of independent but co-ordinated developmental processes a young salmon parr undergoes when it transforms to a smolt. As a parr the fish lives in fresh water, however, as a smolt it will move downstream to a life in the ocean. Physiologically, the functioning of the gills and kidney must be reversed to support this change in environment. The fish’s behaviour also changes. A parr is bottom-dwelling and territorial, whereas a smolt is pelagic and travels in schools. Parr actively swim against the water current to remain in position, while smolt become increasingly buoyant and move downstream, eventually leaving the river to move out into the ocean.

However, if the fish are unable to enter the marine environment during the smoltification period, called the “smolt window”, the fish may “desmoltify” and revert to being a fresh-water fish.

It is no longer believed that the brain is physiologically static throughout life after a critical developmental period in early childhood. Researchers are learning that changes in neural pathways and synapses occur in the brain throughout life due to changes in behaviour, environment and neural processes. Thus many aspects of the brain can be described as being “plastic” or capable of change even in adulthood.

From a research perspective, Norway is lucky that it has a unique, land-locked population of salmon in Lake Byglandsfjord in the county of Aust-Agder, located in south-central Norway. This land-locked population is called Bleke. It is believed to have been land-locked for around 9000 years. Since 1968 population numbers have fallen dramatically, likely due to increased river regulation and acidification of the Otra watershed. Some specimens were captured and conserved in a hatchery and since 1979 there has been a stocking programme for the area. 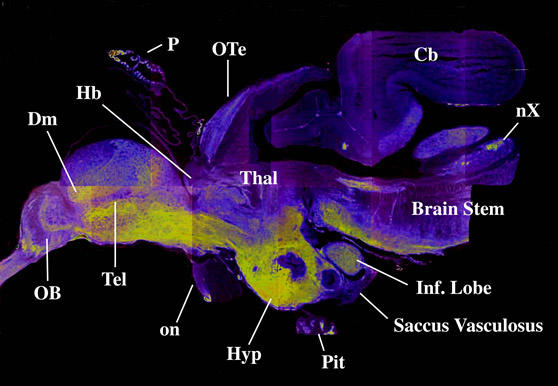 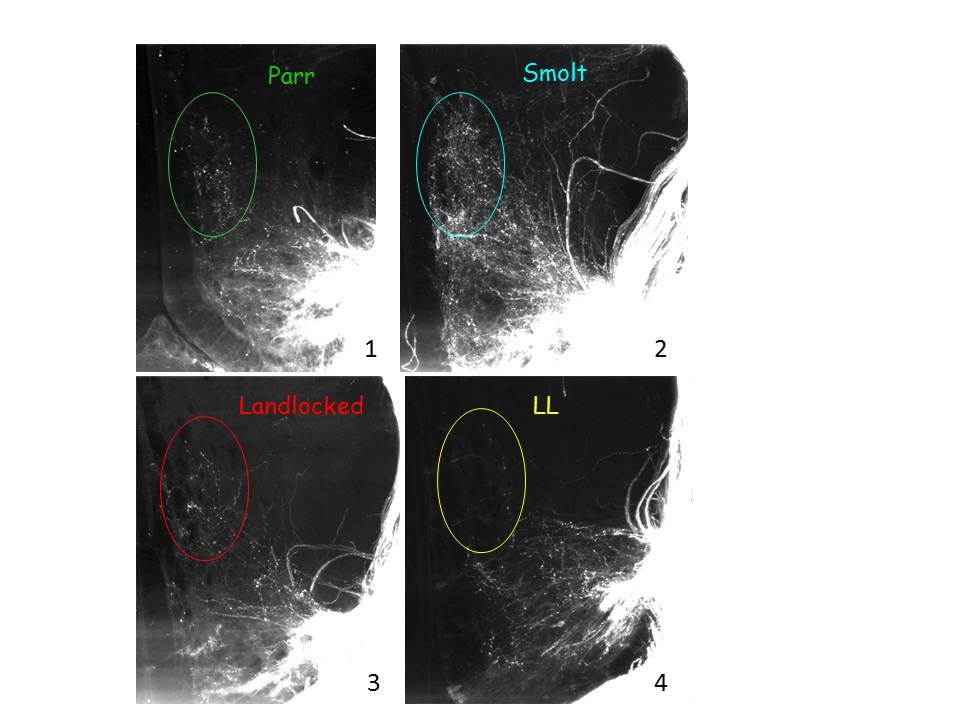 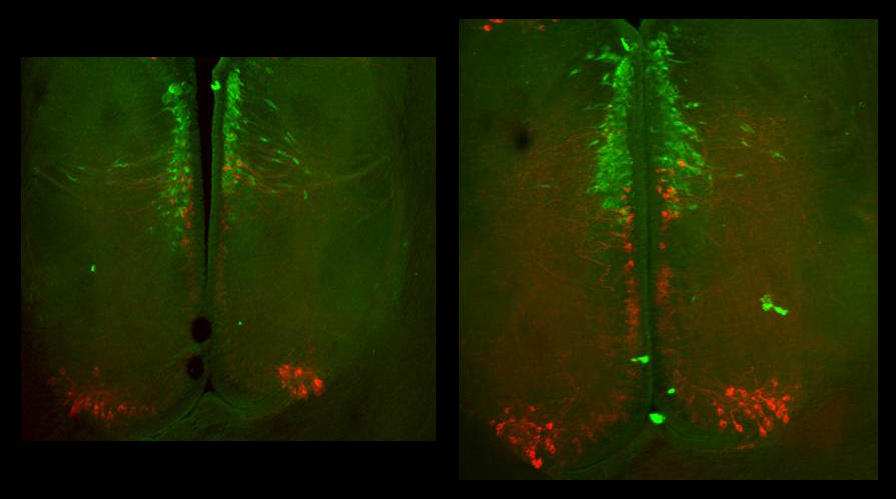 These two immunohistochemistry images show salmon brains. The brightly coloured areas show neurotransmitter systems, CRF (green) and dopamine (red). The brain on the left is from a fish that has undergone a treatment of continuous light and was therefore not stimulated to undergo “normal” smoltification brain changes such as can be seen in the control fish brain on the right.
Photo:
Lars Ebbesson 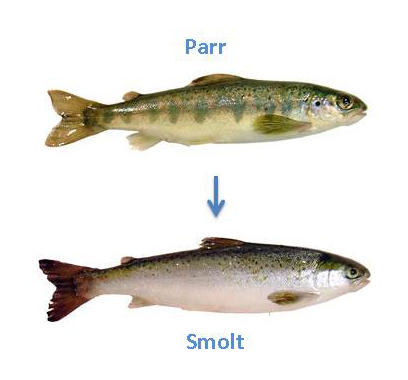