Is identity politics a force for good?

​A fierce debate over social justice and identity-based politics seems to have exploded in recent years in the Western world, and few areas of life remain untouched by cultural conflicts. To some, identity-based politics has been embraced as an effective strategy to combat discrimination and marginalization. To others, it may seem that identity politics has resulted in culture wars involving violent conflicts and a destructive exchange of labels.

Identity-based politics often relate to volatile issues such as abortion, homosexuality, transgender rights, pornography, multiculturalism and racism. Identity conflicts also involve fundamental orientations such as religion and ideology, as well as political issues ranging from freedom of speech to the distribution of wealth and privilege.

Debates on these issues have challenged established views on equality and brought about an alternative demand for identity-based equity as a better approach. Even the term identity politics itself is debated, as many will contend that it is inherently biased and used by those who oppose struggles for social justice by marginalized groups.

Regardless of one’s position on the current culture wars, it seems apparent that they involve both struggles for social justice and struggles for power. With this in mind, the Holberg Prize has invited a prominent panel of speakers to discuss the following question:

Does identity politics as it is currently manifesting itself offer a suitable avenue towards social justice, or has it become a recipe for cultural antagonism, political polarization, and new forms of injustice?

Questions for the panel

Questions for the panelists may be submitted before or during the event.

Judith Butler is an American philosopher and gender theorist whose work has influenced political philosophy, ethics, queer theory, rhetoric and literary theory. She is the Maxine Elliot Professor in the Department of Comparative Literature and the Program of Critical Theory at the University of California, Berkeley, as well as the Hannah Arendt Chair at the European Graduate School. Butler has written more than 20 books, and her best known works are Gender Trouble: Feminism and the Subversion of Identity (1990), Bodies That Matter: On the Discursive Limits of Sex (1993), and Excitable Speech: A Politics of the Performative (1997), in which she challenges conventional notions of gender and develops her theory of gender performativity. Butler argues that being born male or female does not determine behaviour. Instead, people learn to behave in particular ways to fit into society. What society regards as a person's gender can be seen as a performance made to please social expectations, rather than a true expression of the person's gender identity. Butler’s more recent books include Senses of the Subject (2015), which considers how passions such as desire, rage, love, and grief are bound up with becoming a subject within specific historical fields of power.

Cornel West is an American philosopher, political activist, social critic, actor, and public intellectual. West is presently Dietrich Bonhoeffer Professor of Philosophy & Christian Practice at Union Theological Seminary in the City of New York. He has previously held professorships at Harvard University and Yale University. West focuses on the role of race, gender, and class in American society and the means by which people act and react to their "radical conditionedness". A socialist, West draws intellectual contributions from multiple traditions, including Christianity, the Black church, Marxism, neopragmatism, and transcendentalism. He has written 20 books, and among his most influential works are Race Matters (1994), Democracy Matters (2004), and his memoir Brother West: Living and Loving Out Loud (2010). West has a passion to communicate to a vast variety of publics in order to keep alive the legacy of Martin Luther King, Jr. – “a legacy of telling the truth and bearing witness to love and justice”.

Glenn Greenwald is an American investigative journalist and author. A former constitutional lawyer, he founded and wrote for the online global media outlet The Intercept with Laura Poitras and Jeremy Scahill in 2014 until his departure in 2020, when he moved his writing to the online platform Substack. He is the author of several best sellers, among them, How Would a Patriot Act? (2006); With Liberty and Justice for Some: How the Law is Used to Destroy Equality and Protect the Powerful (2011) and No Place to Hide: Edward Snowden, the NSA, and the US Surveillance State (2014). Living and reporting in Brazil, he was central to investigations that ultimately helped free Luis da Silva from prison after what was widely regarded as a parliamentary coup against the former President. Greenwald has received numerous awards for his investigative journalism. In 2009 he was awarded the Izzy Award by the Park Center for Independent Media for his “path breaking journalistic courage and persistence in confronting conventional wisdom, official deception, and controversial issues.” In 2010 he received an Online Journalism Award for his investigative work on the arrest and detention of Chelsea Manning. In 2013 he led The Guardian’s reporting team that covered Edward Snowden and the NSA, which earned the newspaper the 2014 Pulitzer Prize in Public Service. Foreign Policy magazine named him one of the top 100 Global Thinkers for 2013.

Simon Critchley is a British philosopher and the Hans Jonas Professor at the New School for Social Research. His books include Very Little…Almost Nothing (1997), Infinitely Demanding (2007), The Book of Dead Philosophers (2009) and The Faith of the Faithless (2012). Recent works include a novella, Memory Theatre, a book-length essay, Notes on Suicide and studies of David Bowie and Football and Apply-Degger (Onassis, 2020). His most recent books are Tragedy, The Greeks and Us (Pantheon, 2019) and Bald (Yale, 2021). He was series moderator of ‘The Stone’, a philosophy column in The New York Times and co-editor of The Stone Reader (2016). He is also 50% of an obscure musical combo called Critchley & Simmons.

Due to the COVID-19 pandemic, the 2021 Holberg Debate will be held as a live studio event, hosted from New York.

About the Holberg Debate

The Holberg Debate was organised for the first time in 2016 and has since been held annually, on the first Saturday in December. Ludvig Holberg's birthday was 3 December, and the event is inspired by his Enlightenment ideas. The aim is both to see important voices debate pressing issues of our time and to highlight the relevance of the academic fields covered by the Holberg Prize: the humanities, social sciences, law and theology. Thus, the Holberg Debate seeks to engage both the university community and the public at large, and we look to invite well known thinkers with a diverse background, including academics, journalists, authors, film makers and activists.

The Holberg Debate is always livestreamed, and audio/video will be made available on Youtube, Soundcloud and the Holberg Prize website. 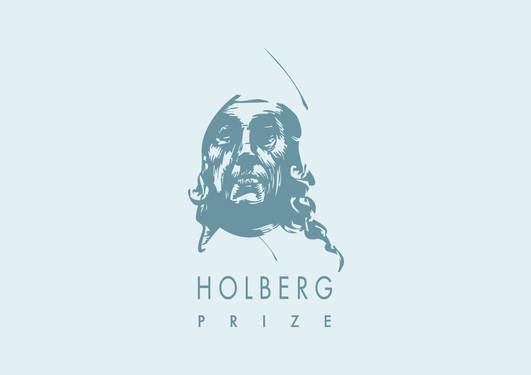 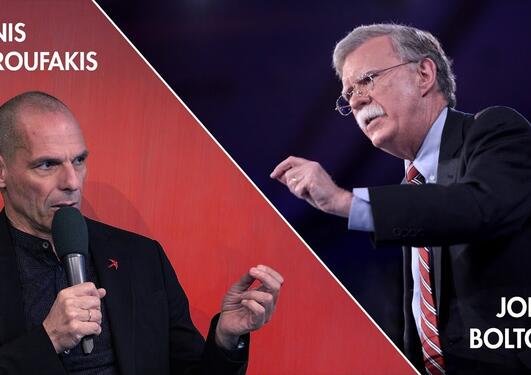 The 2020 Holberg Debate: “Is Global Stability A Pipe Dream?”

At the 2020 Holberg Debate, Amb. John Bolton and Member of the Hellenic Parliament Yanis Varoufakis will discuss current threats to regional and global stability. 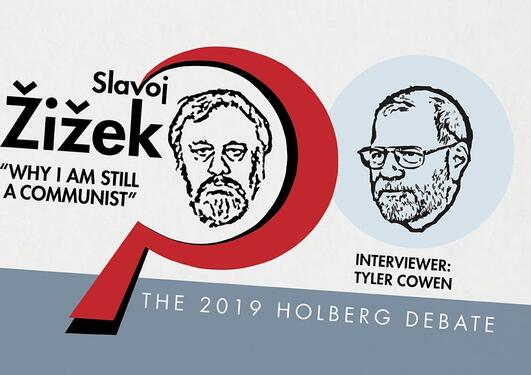 The 2019 Holberg Debate: Slavoj Žižek: «Why I Am Still A Communist»

Slavoj Žižek has been called the «the most dangerous philosopher in the West» and a cultural theorist superstar, as he mixes Marxism with pop culture and psychoanalysis. Three decades after the fall of «Communism» in Eastern Europe, why does Žižek still call himself a communist? 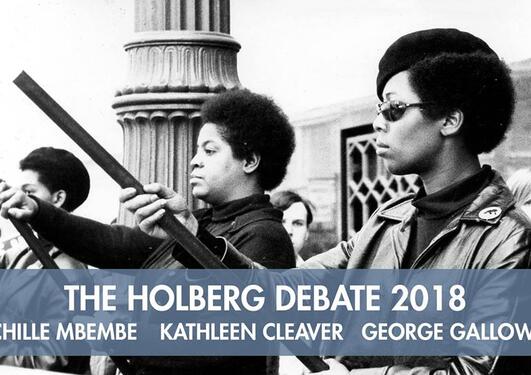 The Holberg Debate 2018: "Politics and Affects: The Dynamics of Social Mobilization"

Fifty years after the 1968 revolt, how important are affects in influencing the behavior of voters, activists and policy makers? Achille Mbembe, Kathleen Cleaver and George Galloway will meet in Bergen on December 1 to discuss these issues.