The composer Edvard Grieg is a figure that most of us recognize when we see him portrayed. In Gunnar Torvund’s sculpture, the area around the figure is sculpted in bronze, so that Grieg’s famous profile emerges. The original material is bent to the side, like an open door. We get to experience both the positive and the negative of the image, so to speak.

When we move around the sculpture, its shape changes dynamically as our point of vision shifts. But, oddly, Grieg’s profile is always clearly distinguishable. Parts of the sculpture stand on a square “plinth”, deconstructed from the rest of the sculpture. Along the side facing the HF building, several small animals are portrayed in relief. Facing the city center, a pattern winds up the side of the sculpture. You have to look closely to discover that it actually consists of repeated outlines of Nina Grieg’s profile. 1995 marked the 150th anniversary of Edvard’s wife, and Åpen II (Open II) was unveiled on that day.

Placed in the park area next to the St. John’s Church, the sculpture is experienced daily by thousands of people, many of whom may not have noticed it is there. Public art is not like art in a gallery. Few of us brave the hillside just to see Open II. It is meant to be a decoration, and perhaps a pleasant surprise for the people who do notice it. Open II can, however, be seen as something more. In portraying Edvard Grieg as part of urban space, we can say that the sculpture emphasizes the world-famous composer’s role in the consciousness of the city of Bergen.

Gunnar Torvund (1948-) has been among the most innovative sculptors in Norway since the 1970s. He is interested in identity and the human journey through life, and has dealt with such issues in different ways in his sculptures. African art is an important inspiration to his stylistic expression. Torvund has worked in a wide range of materials, from butterfly wings and whale teeth through glass beads, feathers, and silver to lead. He has made sculptures representing both poetry and poets, and produced a number of altarpieces. 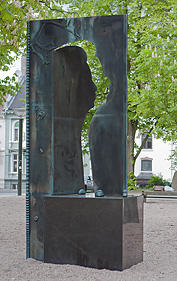 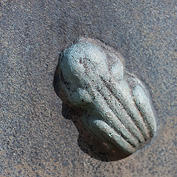