Some snakes and a cranium

Ole Johan Tørud’s prints often touch on religious and mythological themes, and the three that hang in the HF Secretariat are no exception.

Syndefallet (The Fall of Man) shows Eve at the right and Adam at the left of the picture. They are separated by a tree trunk. The snake winds its way up the trunk, leaving no doubt that this is the tree of knowledge. Instead of the usual branches and leaves this tree has a perfect circle, with mysterious patterns inside. The colors are subdued, and the decorated surface leads us to think of old manuscript illustrations.

The cranium of a cow was a motif Tørud used repeatedly. He kept the original, which he had received from Bergen municipal slaughterhouse, standing in his studio. Based on the skull, he created a series of paintings and collages. In this print, the skull is accompanied by a large, blue knight’s helmet, against a background of green and red.

The use of Medusa masks, after the Italian Baroque artist Caravaggio, was another familiar motif of Tørud’s. Especially in the 1980s, he cited a lot from the history of art in his graphics, and used masks from both ancient Greek and African art. In the print in the HF Secretariat Medusa has a spherical eye; the skin around appears to have been torn away. The other eye is more normal, but with morbidly smeared makeup. The snakes look almost mechanical, and are intermingling with a whole lot of sprockets.

Ole Johan Tørud (1927-2004) was an artist. He is known to have used many different media -  he made a number of material works in the 1960s - but from the 1970s, he worked mostly in graphics. Among the many institutions that have purchased his artworks are the National Museum, the Arts Council Norway, the City of Jyväskylä in Finland and the Scandinavia House's artotek in Reykjavik. Tørud was chairman of the Visual Artists' Association, Hordaland, in 1973-76 and 1981-82, and was one of the driving forces behind the creation of Norske Billedkunstnere (Norwegian Visual Artists). 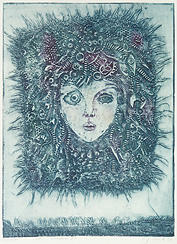 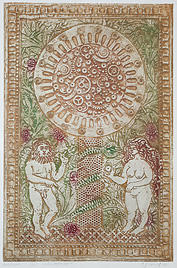