Ludvig Holm-Olsen (1914-1990) was the first professor of Nordic philology at the University of Bergen, and the University's third Rector, from 1960 to -65.

Before that, he had sat for a period as Dean of the Faculty of Arts, 1956-58. Holm-Olsen played an important role in the development of the newly founded University of Bergen. Academically, he is best known for his work with Sverre's saga and Kongespeilet (the King's Mirror). Holm-Olsen wished to make research available to a wider audience, and wrote several popular science books. He served as editor of the journal Maal og minne (Tongue and memory) for over 30 years, and almost as long as co-editor of the Archive for Nordic philology. In 1967, Holm-Olsen was appointed both Officer of the Order of St. Olav, and Grand Knight of the Icelandic Order of the Falcon.

Agnes Hiort painted two portraits of the Rector in 1965. The one that is not in the Kollegierommet hangs in the HF building at the Department of Linguistic, Literary and Aesthetic Studies. The portraits are quite similar. In the painting at HF Holm-Olsen is shown standing, and facing slightly to the left. The red Rector’s robe and an even redder book, which he keeps under his arm, contrast the cobalt background, which in the left corner is broken by stronger blue and white. A clearing sky? Holm-Olsen's expression is serious, but good-natured.

In the portrait in the Kollegierommet Holm-Olsen appears sitting and facing in the opposite direction, in three-quarter profile. The red book is still present, but now it rests in his lap. The background here is without a breach. He looks more brooding than in the HF portrait, but his eyes still have that good-natured appearance. 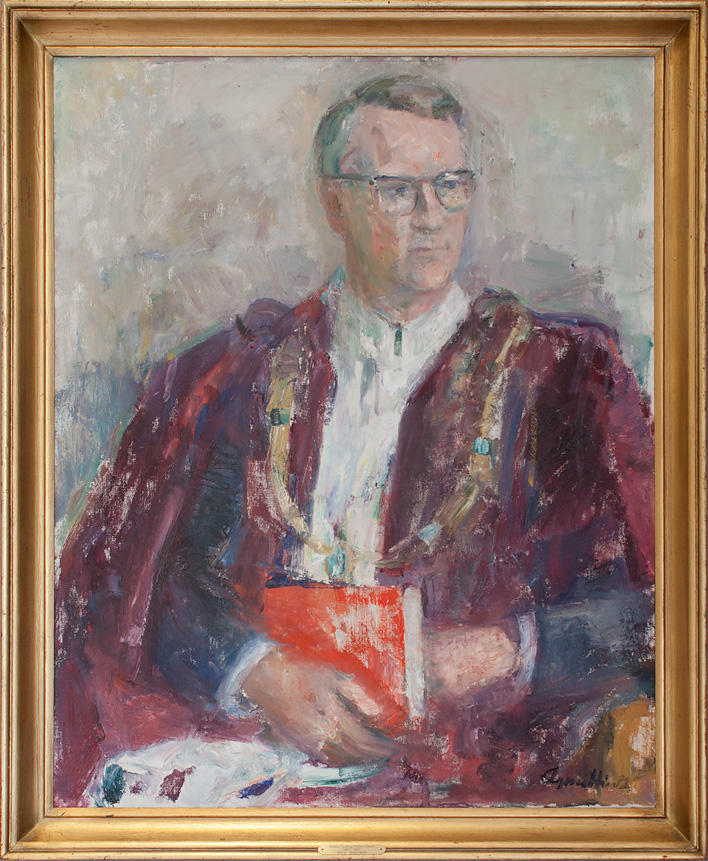