The faces hang on the wall, they are first and foremost an eye, sometimes a mouth that is clearly outlined, a Greek nose. They look down on us, or over at each other. The public art at the Social Sciences Library is a series of sculptural reliefs made by artist Ingri Egeberg and goldsmith Helge Bakka. Egeberg has also made two painted faces on the first floor.

The light casts shadows behind and below the sculptures, a spatial dimension that makes them bigger, more important. This is particularly true of the face where the shape is a spiral, it is three-dimensional, transparent; the shadows from the helix form a new face on the wall behind. The mouth of the upper face is the eye of the shadowy face below.

Completely different is the spatiality of the next face up the stairs. Here is layer upon layer of solid material, strategically holed through so you can see into the depths of the structure. A sheet of brown metal is outermost, but covers only part of a layer of steel full of holes. An intensely red plate appears behind it, so it looks as if the sculpture has "freckles".

The two faces of the second floor are part of the wall, sweeping painted lines. Are they looking up, down or right at us? The faces are not happy; they are serious, thoughtful, as people often are in a library. From their high vantage point they gaze down at the passersby, stressing the public function of the building.

Ingri Egeberg (1951-) is a painter, illustrator, printmaker and writer. Characteristic of Egeberg’s art are the quick, determined lines, and a sensitive handling of colors. She has focused a lot on human heads, sometimes with the mouth in the center, other times it's eyes she is concerned with. Egeberg has a very large production. She has had a number of decorative commissions, notably for the NAV and Statoil, and her pictures are bought by, among others, the National Gallery and the Norwegian Parliament. 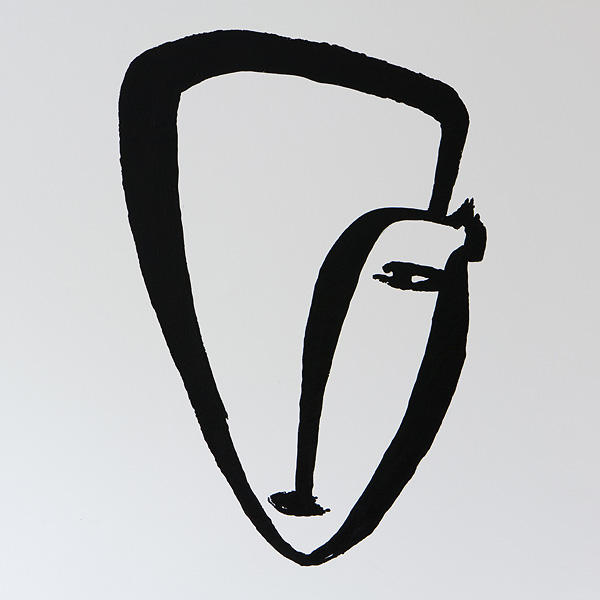