The monumental photographs by Tom Sandberg in the entrance area of the BB building refer to themes that the users of the building deal with on a daily basis.

Tom Sandberg's Untitled, 2004 (head on the beach) is almost three meters wide. The baby head dominates the picture, against a backdrop of sea and beach. It seems as if the child has crawled out of the sea, and evolutionary history is a clear connotation. Does it give us something extra to know that the picture is of Sandberg's daughter, Marie? That it is his own evolutionary history? The head is big as a planet, it looks like a moon that Sandberg has portrayed in a different picture.

Marie's head is a world in itself. The sparse downs of hair get a picturesque quality, because the subject is so enlarged that the texture at the same time becomes blurred and grainy. That we do not see her face makes the baby extra fascinating. She lies with her face pressed into the ground, but we see the little hands, one is in motion, chubby fingers extending forward. With the other little hand she rubs her cheek, perhaps the sand itches against her delicate skin. It is difficult to say whether she is on sand or on a rough carpet, even the substrate is in sharper focus than the baby. The sea and sky are diffuse, they overlap and create a sense of infinite time.

The baby picture hangs in the mixing area along with two other photos of Sandberg's. One depicts a naked body at an unusual angle, the other a strip of light on a wave peak. In the picture of the body, we first and foremost see the back and buttocks diagonally in the image. The angle alienates the subject, there's no attempt at eroticizing. The body looks almost like a bone. The wave peak is captured just before it breaks, a strip of light broken by an intensely black crack is the most important element in the scene. Close-up, and in black and white, the picture appears almost abstract. It's the kind of abstraction that we can do ourselves, standing on the deck of a boat, if we see a glimpse of sunshine against salt water. We zoom in, and the rest of the view is, for a brief moment, unimportant.

The users of the BB-building are doctors and medical students. Bodies, birth and death are part of their everyday lives. Sandberg's pictures provide a different, tilted angle on issues that the users relate to in their profession.

Tom Sandberg (1953-2014) was a photographer, almost exclusively taking pictures in black and white. He is partially to thank for the acceptance of the photo as an artistic medium in Norway, and is an internationally recognized artist. Sandberg's series of portraits from 1985 was one of twelve artworks included in the newspaper Morgenbladet's "canon" of contemporary Norwegian art in 2005. His photos are characteristically taken in a small-scale format, but in the finished artwork they are shown many times enlarged. This gives to the pictures a contrasting sense of coarse reportage and pixellated monumentality. In this way, he exposes photography as a medium: we are made to look not only at the pictures, but also at the photographic devices that are so clearly presented to us. 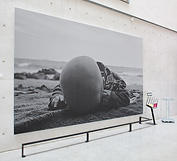