Oddvar Torsheim’s prints at the Faculty of Law are simple, and seemingly cheerful. A girl stands in front of a landscape of sea, houses, mountains, a dog. Three bats are flying toward us, in a picture called Tre engler (Three Angels). The dogs Fido and Trufast are running in front of red mountains and a tilted moon. In the print Svensk-toppen (Swedish top) two extremely similar dogs run in front of a landscape that is almost identical, but with blue mountains, the tops colored yellow by the crescent moon.

The surroundings are mirrored in the sea, an upside-down country that is both similar to and different from the one above. Any native to Western Norway is familiar with such reflections, and Oddvar Torsheim is a consummate Westerner. The landscapes are never completely empty, they are filled with dogs and bats as well as the characteristic, simple house. But only one of them features a human being, a girl who, if we are to believe the title, is called Frøydis. And even here, in Frøydis and Fido II, the dog is in the center. Frøydis is located outside the landscape, in a dark frame field. She gazes straight at us, and does not look back toward the howling dog. The linking word "and" feels ironic: Frøydis is clearly isolated from Fido and the rest of the fjord landscape.

There is something strangely gloomy in these brightly colored pictures. Everything is so cut off from everything else. The three "angels" look more like devils, dark and spooky. They cover almost the entire picture, hovering ominously in front of the fjord. The pictures of the dogs are perceived as less unpleasant, but in the Svensktoppen print, too, the title gives the content a double meaning: the dogs howling at the blue and yellow mountains can also be an illustration of the music list Svensktoppen.

Oddvar Torsheim (1938 -) is an artist, writer and singer. He is a pop artist, producing graphics and paintings in a style inspired by cartoons, commercials and magazines. The pictures show a simplified, symmetric reality, but beneath the cheery exterior, there is usually a serious barb. Torsheim has held numerous solo exhibitions in Norway and Sweden, and has made decorations for the County Hospital of Aalesund. His art is purchased by National Gallery and Arts Council Norway, to mention a few. Torsheim has received the Naustdal Award and the Regional Culture Award of Sogn og Fjordane, and is an honorary citizen of Førde in Western Norway. 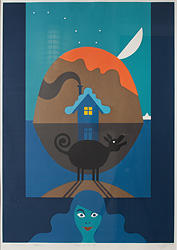