If you turn around upon entering the main hall at the HF library, you will see a round relief hanging above the door. It shows a number of small, simplified human figures in a circle. They represent all the colors of the rainbow, and an array of different expressions.

The relief is made of copper and enamel, like the larger relief in the vestibule of the library, which is also by artist Else Hagen. The enamel has clear tones of blue, green, red, yellow and white, with various shades of each color.

The people are standing close together, in different poses. Some are moving, while others stand at rest, with arms raised or lowered. Although they are simply shaped, we can clearly see their facial expressions. They range from deep pain to joyous abandon. The circle formed by the little figures is reminiscent of Earth, so the message is clear. The relief was made in 1975, and is an obvious product of its time, but it is still capable of touching us with its humanity.

Else Hagen (1914-2010) has decorated so many of Norway’s public spaces that she has been called the “grande dame” of Norwegian monumental art. She started out as a painter, but was one of the first to experiment with metal, wood, glass and stone. In later years she worked predominantly with such materials. Hagen was the first female artist in Norway who completed a major decoration commission, with the wall paintings at Nøtterøy Junior High School in 1950. The stair hall in Parliament, the expedition hall in Tromsø Airport and the commercial building Postgirobygget in Oslo are all decorated with her monumental work. 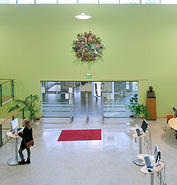