About Historical time by Toril Johannessen

The HF building has a new artwork, created by Toril Johannessen. The work addresses the concept of time and its cultural history through an element that differs from conventional time measurement: a metric clock. The clock is installed in the outdoor atrium, and nine graphic prints that in various ways discuss matters of time and history are located in the vestibule. We ask the artist about the project Historisk tid (Historical time).

Q: Why time? What gave you the idea for this project?

To philosophize on such a complex and abstract notion as time is of course a challenging thought exercise, like concepts such as infinity or the scale of the universe. The project for the HF faculty did not evolve, however, as much from an existential question of what time is as from an interest in the history of science and how time is measured. Many of my projects are thematically related to history and science, especially science. To me, one of the exciting things about reading history is how our cosmologies paradoxically appears both as driven by chance, and as a coherent story about driving forces such as politics, science and desire.

More specifically, I was inspired by a book on Albert Einstein and the French mathematician Henri Poincaré, who worked at approximately the same time around the turn of the century with the pioneering theories of space and time. The author Peter Galison writes about how research and the development of physics is not only dependent on theoretical abstractions, but how it is also affected by machines and technological development. Galison speculates, among other things, on how Einstein's years in the patent office in Bern, with a view to the railway station with one of the first coordinated clocks in Europe, may have influenced the development of the theory of relativity. It is a story of the synchronization of clocks that eventually led to the global standardization of time and a new sense of time and space. The decimal system is also a part of this story. Throughout the ages, several people have developed, used and applied to patent time measurements based on decimal notation, but probably the most famous attempt at introducing it was during the French revolution, hence decimal time is often referred to as French Revolutionary Time. The Convention of 1795 which introduced the metric system by defining units such as kilos, liters, etc. did not include time, and metric clocks were only in use for a short period in 1794/1795. A calendar based on the metric system, known as the Republican calendar was in use for about 10 years in the same period. The idea for my project began, therefore, with physics, the history of time measurement and an interest for how some of the standards we make use of in our daily lives came about. Our way of measuring time is of course not naturally given, but a construction with a specific history and profound implications.

Q: How did you arrive at the clock itself, its design?

The clock displays time in the same way as the French decimal clocks did, that is, the day is divided into ten hours, which are divided into one hundred minutes and one hundred seconds. The design, on the other hand, is made to look like a modern public clock, to match the architecture of the space. In retrospect I see that I was certainly influenced by the place I was living when I started the project. I lived in Berlin at the time, where cubic clocks with four clock faces, mounted on poles, can be seen on every street corner. Which is funny, speaking of coincidences and how ideas are generated.

Q: One of the charts is a German map from the 1800s, showing the proportion of high mountains in the different continents. It differs a bit from the others?

Yes, the other diagrams show the frequency of use of selected words in academic journals, while in this picture I have combined a comparative map of the height of mountains on the continents, with statistics of the economy on the same continents in terms of the percentage growth in gross domestic product.

The height of the mountains of the world, of course, has no impact on gross domestic product. The laws of nature, what we at any given time perceive as "nature" and the basic conditions of how the world runs, are often used as a model for understanding other fields. Science is full of metaphors, and here I have twisted the concepts a bit. What happens when the economy is made the model for how we understand nature?

I have deliberately made these images static, like historical documents. Public commission tends to be universal and timeless because they are supposed to talk to its visitors for a long time. The data of the statistics I have made will, however, quickly become outdated in the sense that they stop at the time this project was completed. The clock shown in one print is obviously also at a halt, while the two calendars represent a random year in the future. They are sections, fragments of historicized time. 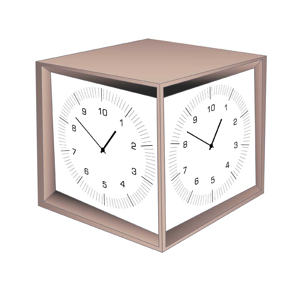