Historical newspaper articles mentioned a movie that Nasjonal Samling had ordered to highlight their propagandistic praise of Grieg. After more than 70 years the film can be viewed for the first time in full length on the webside of the Grieg Research Centre.

The film was found in the archives of the Norwegian National Library by Arnulf Mattes and Michael Custodis in connection with the ongoing project on Norwegian musical life 1940–45.

The celebrations of Edvard Grieg’s centennial in 1943 offer a unique opportunity for imagining the structures of Norwegian musical life under totalitarian conditions. Although the few authors that touched upon the events of 1943 referred to this movie, it seems that nobody has seen it ever since. After intensive inquiries it could be located in Oslo’s Nasjonalbiblioteket. To disenchant the myths that entwined around it over the years, it is shown here for the first time. Although the presented images seem innocent and unideological, we nevertheless are dealing with a piece of intended Nazi-propaganda. This calls for critical distance of the viewers and scholarly comment.

The assessment (political, aesthetic, moral) of highly politicized artistic works such as Fyrst's short-film, created during the occupation, is far from conclusive and until today provoke controversial debates in case such works were to be performed. Since each work is unique and has to be understood in its specific context, generalizations about art and its use as propaganda ignore the inticacies of the relationship between art and politics, ethics and aesthetics of artistic production, perception, and reception. In the case of Norwegian artists accused of and convicted for participating in the occupation regime's cultural propaganda, most of them became rehabilitated after the war. Many artists never were charged in a court room at all: The decisions were made by the artists' societies' commitees, suggesting who to include and who to exclude. The majority of politically compromised artists became rehabilitated after a shorter period after the war, many of them recommencing their careers within their field. These processes still await to be scrutinized systematically, as it is the case with Walter Fyrst's.

Accordingly, the investigation of the Grieg centennaries in 1943 adds necessary historical context, including further archival material that proves the unquestionable political background of the movie. Moreover, it might contribute to the retrospective understanding of art as propaganda in Norway, with Grieg right at the centre of cultural and ideological warfare.

"After three years of political and military occupation, the Grieg centennial in June 1943 gave the new German masters a long awaited opportunity to praise not only the iconic Norwegian composer, but most of all the close, and stronger than ever cultural bonds with their Nordic Brudervolk. Much seems to be known about the sequence of events during 1943. However, the recollection of these events has mostly been left to fragmentary reports and anecdotes, told by protagonists or bystanders, and was kept intact and more or less uncommented in the historical narrative after 1945. Many sources have still not been considered.

During the celebrations in 1943, all major parties’ protagonists came together to celebrate the allegedly unifying idol, a gathering that gives an impression of occupied Norway’s musical life in a nutshell. When Josef Terboven’s Reichskommissariat was established at the end of April 1940, following Adolf Hitler’s direct command, Reichsminister für Volksaufklärung und Propaganda Joseph Goebbels immediately sent his young, loyal personal consultant Georg Wilhelm Müller to take over all matters of propaganda. Müller imposed the organizational structures of the Reichskulturkammer onto Norway’s public life to control all cultural aspects. Even after Vidkun Quisling was promoted to prime minister under Terboven’s supervision in 1942, the previously practiced subdivision of affairs between German leaders and Norwegian subunits was kept intact. Therefore, under Müller’s control the former ‘Statsråd’ Gulbrand Lunde was now entitled to function as the head of the Norwegian Kultur- og folkeopplysningsdepartementet. He was succeeded by Rolf J. Fuglesang after his accidental death in October 1942.

Terboven showed no interest in the cultural domain, so that Grieg’s centennial fell under Müller’s and Lunde’s duties. All across Norway concerts, recitals and lectures were given to honour and remember Grieg, flanked by intense press reports and literary publications. For the official German ceremonies Müller in the presence of Vidkun Quisling declared on June 10, 1943 his commitment to Edvard Grieg. Avoiding the word ‘Nordic’ but speaking about Germanic and pan-Germanic bonds instead, and of course ignoring Grieg’s distinct statement against anti-Semitism in the middle of the Dreyfus affair, he emphasized Grieg’s central place in history.

For the official celebration in Bergen on June 15, German and Norwegian politicians joined forces, including Heinz Drewes, the influential head of the music department in Berlin’s Propagandaministerium, to place a wreath at Grieg’s grave in Goebbel's name. Later this day, a gala dinner was given, where Minister Rolf Fuglesang – who had spent NKR 98.700 for the various celebrations nationwide – delivered an official address to the Norwegian people, broadcast by Norway’s National Broadcasting (NRK). The archives of NRK contain also a remarkable six-minute report from the official Filmavisen of June 28, 1943, documenting the official celebrations in Bergen from the point of view of the propaganda apparat, including the scene of the wreath-laying ceremony.

Additionally, Walter Fyrst produced a semi-documentary movie, juxtaposing famous sites from Grieg’s life such as Troldhaugen with rural scenes from the Hardanger region. The Reichskommissariat’s official newspaper had started reports early on in 1943 about a voluminous film dedicated to Grieg. But the closer the occasion came, the shorter the movie became. Documents in Oslo’s Riksarkiv reveal that Fyrst had a generous budget (with NKR 4.550 just for honorariums, app. NKR 3.000 for orchestra recordings, and further costs for outdoor shootings and editing), which nevertheless turned out to be insufficient for his ambitions (Riksarkivet Oslo, Sig. RA-S-1330-F-Fd-Fdb-L0003in, see illustration) .

After Fyrst had served as the Nasjonal samling’s propaganda chief from 1933 to 1934 and become a professional director and producer, Fyrst knew the business quite well and drove tough bargains with the official administration at Kultur- og folkeopplysningsdepartementet, though he even feared actions of local farmers to sabotage a staged bridal march in the Hardanger valley. The final version of the movie featured Grieg’s most famous tunes, recorded with Odd Grüner-Hegge and the Oslo Philharmonic Orchestra, and popular soloists such as Randi Heide Steen performing Grieg’s Solveig’s song as a mise en scène in a traditional costume in front of a Norwegian mountain cabin with goats jumping around. Aftenposten's evening issue from 15 June 1943 (see illustration) and even the Deutsche Zeitung in Norwegen were publicly rather critical towards what has been expected to be a highlight of official German-Norwegian Grieg propaganda." 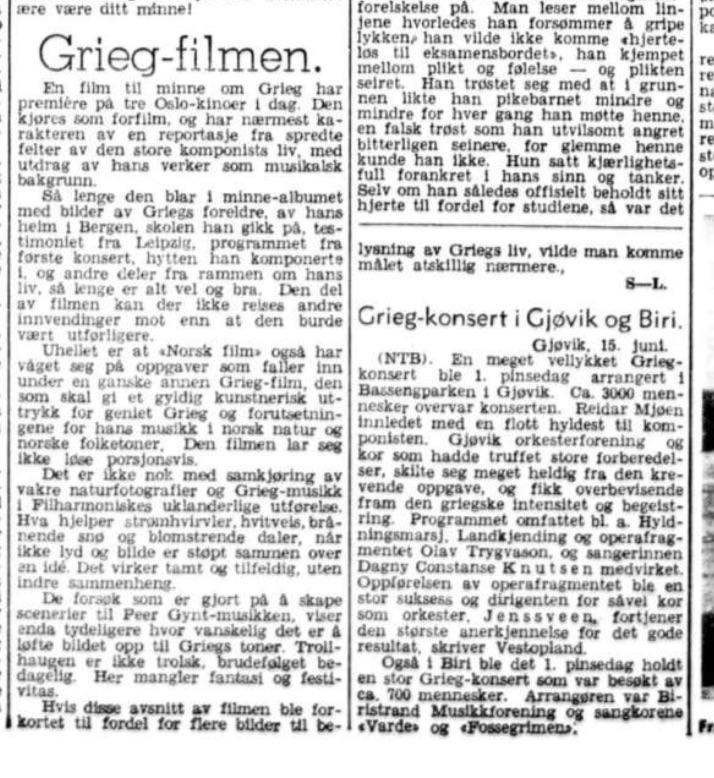 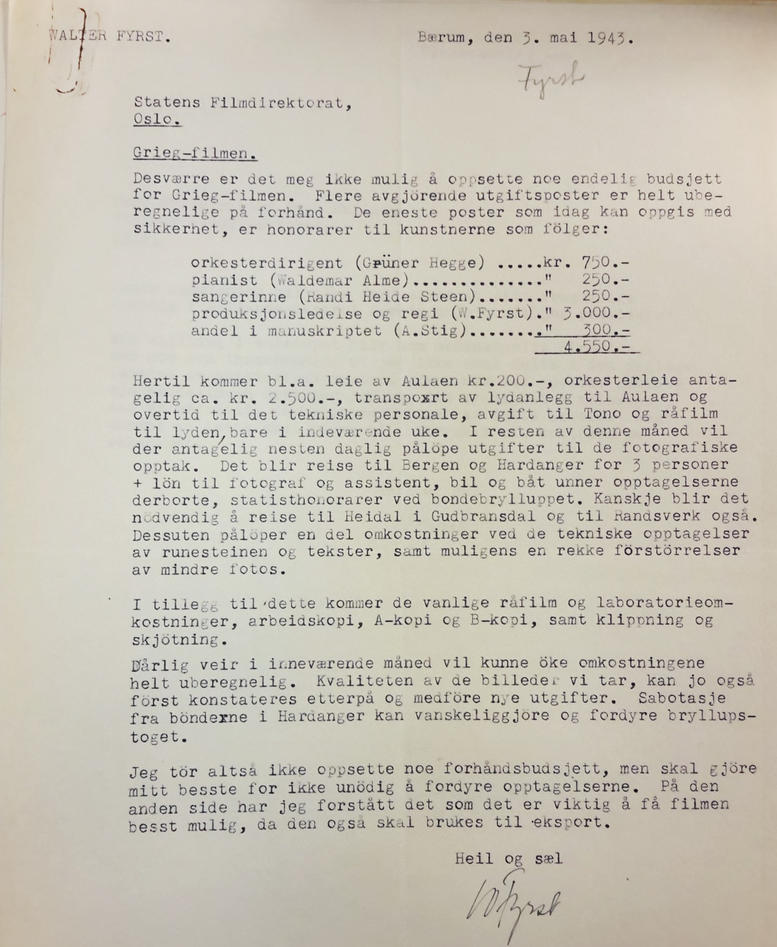 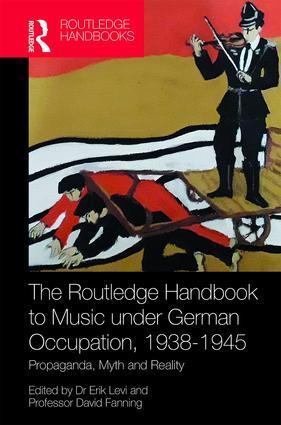