The University of Bergen and its partners collected four tonnes of plastic waste during this year’s plastic clearing drive. By comparison, 1.5 kg of plastic were found in the stomach of the Plastic Whale.

Video: At "Strandryddedagen" 19 September 2020, UiB and partners cleared 1.2 tonnes of plastic in a few hours in the sea gap off Hellesøy.
Producer:
Nyland Film

It is easy to feel discouraged when you realise the magnitude of the plastic problem. But every little counts. Researchers from the University of Bergen found 1.5 kg of plastic in the stomach of the “Plastic Whale” that washed up off the coast of the island of Sotra in 2017. That’s all it takes to kill a whale.

“This means that removing even a relatively small amount of plastic from the sea can make a big difference to marine life,” says Helene Wiken, environmental coordinator at the University of Bergen, and Mari Froastad, a student and sustainability pilot, who have been at the forefront of the University of Bergen’s plastics project this autumn.

“However, the best solution to the problem of plastic pollution is to try to reduce your own consumption and to prevent plastic from ending up in nature in the first place,” they add.

The plastic problem has received a lot of attention after a sick whale had to be euthanised off the coast of Sotra in January 2017. It became known as the Plastic Whale, after University of Bergen researchers opened up its stomach and found that it was full of plastic, rendering it unable to absorb nutrients. The story quickly spread around the entire world and sparked a massive anti-plastic movement.

“The University’s students, staff, alumni and partners have demonstrated an impressive level of involvement and enthusiasm,” say Helene Wiken and Mari Froastad.

Wiken and Froastad were shocked by what they saw during the clear-up operation on a number of small islands off Hellesøy on 19 September.

“We could barely walk a metre without discovering huge amounts of plastic. Even though we only picked up a fraction of the waste in the area, we are very pleased to have helped remove 1.2 tonnes of plastic in two or three hours. Taking part in this kind of operation is a real eye-opener,” they say.

In addition to the partners the student organisations Spire, World Saving Hustle and Naturvernstudentene (Young friends of the Earth) took part in the clean-up operation, which had to be scaled down to two groups of 20 invited participants due to the Covid-19 infection control rules.

Wiken would like to extend a special thank you to In The Same Boat and Bergen and Bergen og Omland Friluftsråd (BOF) for their fantastic coordination and work management at the clean-up site that day.

New initiatives are already being planned and Wiken and Froastad hope that the University of Bergen will be able to take even more students out on clean-up operations with In The Same Boat and BOF at a later date.

An interdisciplinary network of plastics researchers is currently being built up at the University of Bergen, where students, PhD candidates and researchers study everything from legal issues to health challenges related to the plastic problem. As part of her role as a sustainability pilot at the University of Bergen, Mari Froastad has also been involved in the development of this network.

The University of Bergen carried out this year’s plastic clean-up drive together with In The Same Boat, Bergen og omland friluftsråd (BOF), Om i morgen, Havkollektivet, Naturvernforbundet Hordaland, and the student welfare organisation Sammen.

The UiB students’ underwater club SUB-BSI conducted a number of organised clean-up dives in connection with the plastics drive.

In addition, our partners ran several initiatives of their own during these weeks. 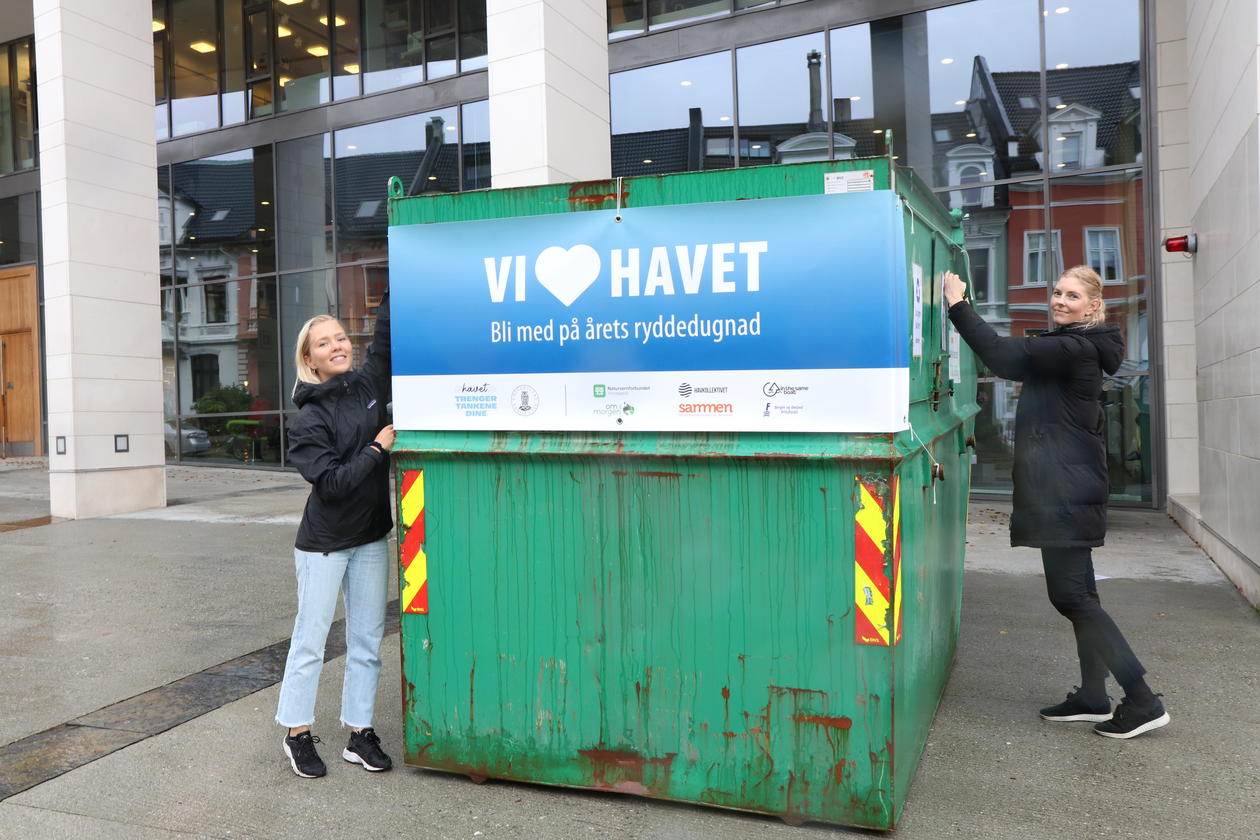 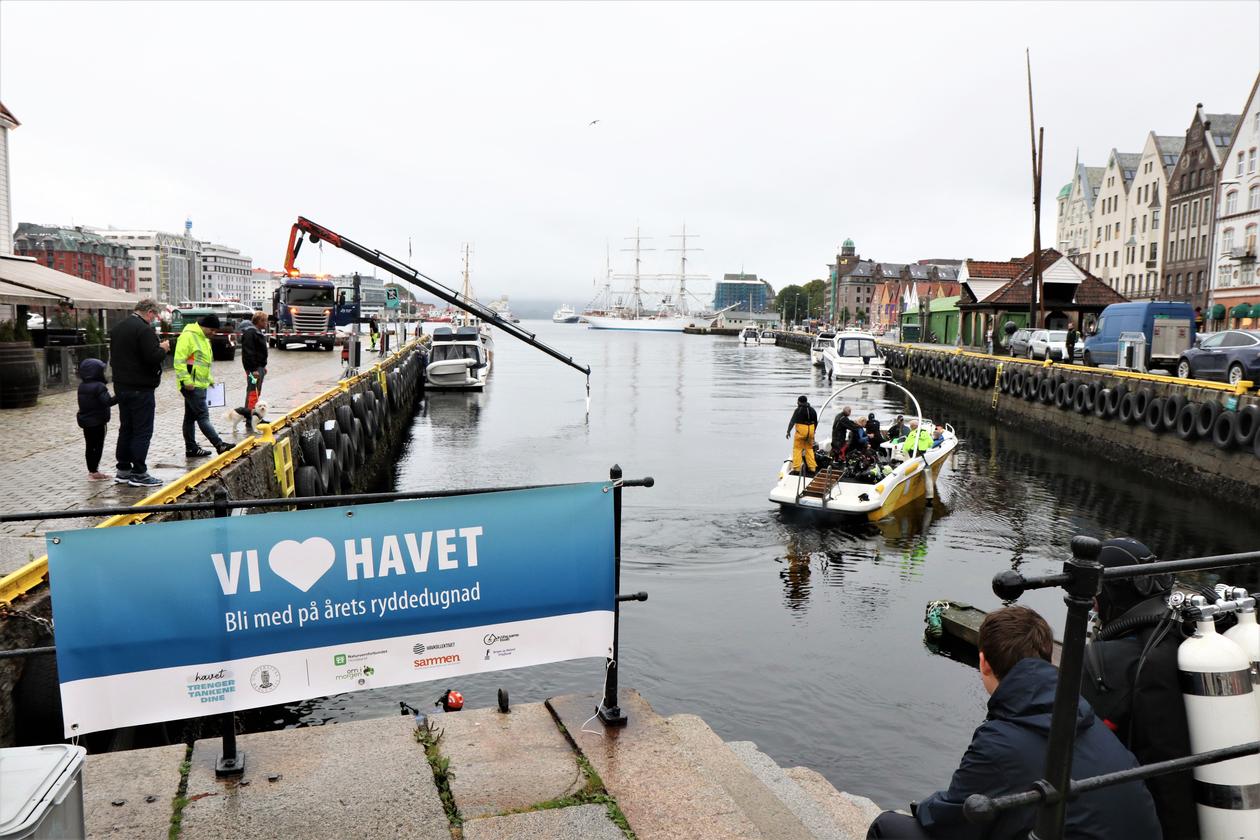 35 divers from SUB-BSI and Bergen Diving Club cleared large amounts of marine waste from Vågen on 18 September in collaboration with the Port of Bergen.
Photo:
Ole M. Kvamme, UiB 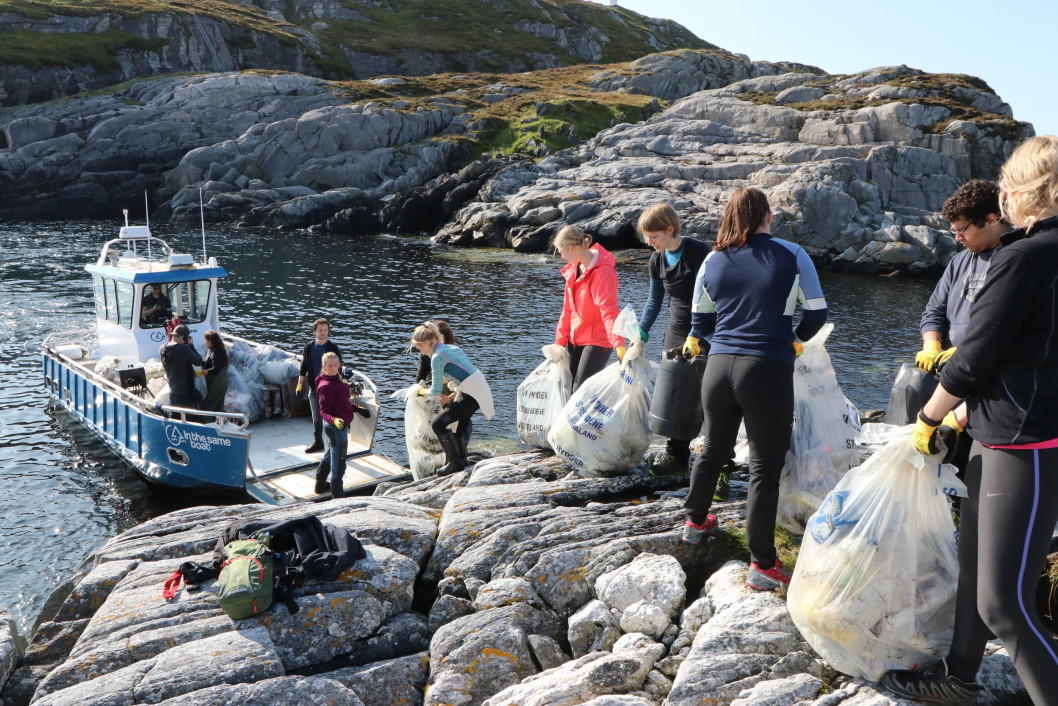 In September 2020, UiB and partners cleared 1.2 tonnes of plastic in a few hours in the Hellesøy area.
Photo:
Ole M. Kvamme, UiB