Extraordinary shakings of a distant magnetar

The ASIM instrument aboard the International Space Station was the only instrument out of seven which detected the giant flare and recorded the main burst phase without being blinded by the giant flash of high energy which saturated the other six detectors at the time of the maximum emission.

After a very long journey through space, a burst of high-energy radiation was detected by the Atmosphere-Space Interactions Monitor (ASIM) instrument aboard the International Space Station (ISS) on April 15, 2020. The origin of this energetic burst was found to be a giant flare from an extremely magnetized neutron star known as a magnetar, located more than 10 million light years away in the galaxy NGC 253.

“Detections of giant flares from magnetars are extremely rare”, explains Alberto J. Castro-Tirado (Institute of Astrophysics of Andalucía, CSIC, Spain). “The burst on April 15 was the first conclusive detection of a magnetar giant flare since 2004. In just a sixth of a second, the flare released an energy comparable to what the Sun radiates in 100.000 years”.

In a groundbreaking study [Castro-Tirado, Østgaard, Göğüş et al., 2021] published in the latest issue of Nature, the authors (including 8 researchers from BCSS) report – for the first time – the fine structure of the main burst phase of a magnetar. “During the initial hard spike, two prominent, high-frequency Quasi-Periodic Oscillations (QPOs) are observed”, says Ersin Göğüş (Sabancı University, Turkey). “This will likely be a game-changer in our understanding of magnetar giant flares”, adds Castro-Tirado.

QPOs in the high-energy emission can be the signature of oscillations either in the magnetic field surrounding the neutron star, or in the matter of the star itself, probably following a catastrophic event on the star called ‘starquake’. “Understanding these oscillations can shed light on the structure of these mysterious objects” states Michael Gabler (University of Valencia, Spain).

According to Kjetil Ullaland (BCSS and UiB, Norway), the remarkable findings “were possible due to ASIM’s large effective area and high time resolution”. The sensitive ASIM electronics have further allowed the authors to perform detailed temporal and spectral investigations of the main phases of the giant flare.

“Based on the temporal structure and energy distribution, we distinguish four distinct phases during the flare”, says Martino Marisaldi (BCSS and UiB, Norway). “Sudden spectral variations found in such a short time scale provide yet another crucial insight into the puzzle”.

“Several papers about the April 15 burst have already been published, using data from the Fermi Gamma-ray Space Telescope, Konus WIND, and the Swift Gamma-Ray Burst Mission”, says second-author and BCSS leader Nikolai Østgaard. “However, as ASIM was the only mission that detected the main burst phase in the entire energy range of photons without saturation, it puts the ASIM instrument in a unique position to unveil some of the secrets surrounding magnetars”.

About magnetars and neutron stars

What brings life to a star is the nuclear fusion of hydrogen to form helium in its core. Depending on their mass, stars run out of fuel after millions to billions of years. At this point, massive stars with 10 to 25 solar masses explode as supernovas and may leave their collapsed cores as compact remnants. The extreme conditions when it comes to e.g., pressure and density, cause protons and electrons to combine into neutrons, hence the name neutron star.

A magnetar is a rare type of neutron star possessing the extremely strong magnetic fields (up to about a quadrillion, that is  Gauss), giving rise to very energetic and characteristic bursts of X-ray and gamma rays. In our Milky Way galaxy, there are few thousand neutron stars. Of those, only 30 are currently known to be magnetars. Magnetar giant flares are so bright that, when coming from our galaxy, they saturate all instruments, making it very difficult to fully investigate them.

The researchers explain the findings in this video from BCSS.
Producer:
Kavitha Østgaard, BCSS

This is part of Fig 1 in [Castro-Tirado, Østgaard, Göğüş et al., 2021], revealing the QPOs in the first few milliseconds, as detected by the low-energy detector (LED) and high-energy detector (HED) on ASIM.
Photo:
ASIM 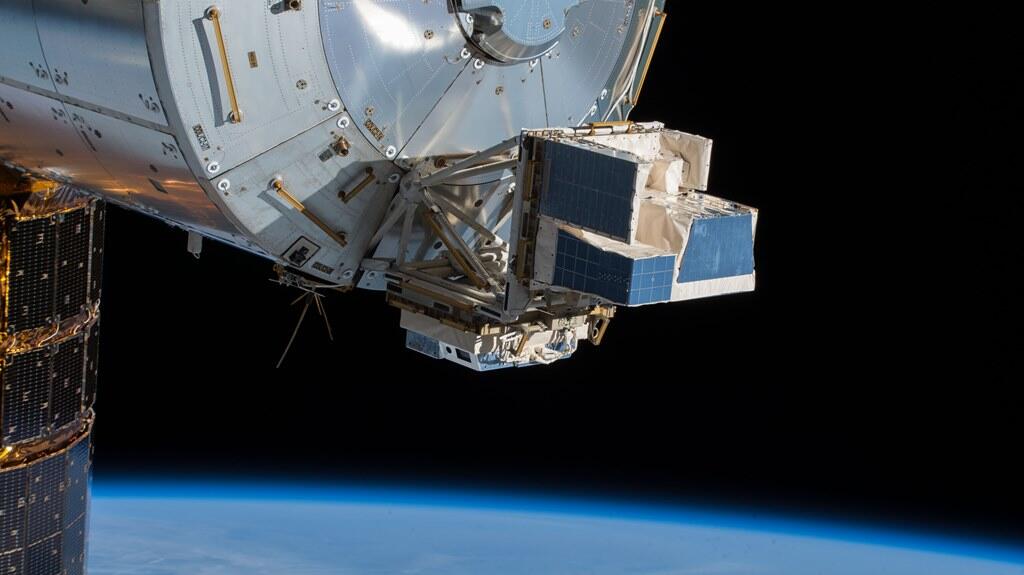