NorEMSO is structured under an overarching scientific objective to better understand the drivers for the temporal and spatial changes of water mass transformations, ocean circulation, acidification and thermo-chemical exchanges at the seafloor in the Nordic Seas, and to contribute to improvement of models and forecasting by producing and making available high quality, near-real time data. NorEMSO will represent an important extension of the existing EMSO network toward the north. The network of NorEMSO in the Nordic Seas will comprise of three main components: moored observatories, underwater gliders, and an integrated seafloor-water column observatory.

Each work package (WP) will be led by two different institutions in order to strengthen competence and promote institutional relations.

WP1 will maintain strong links with EMSO ERIC. The WP leaders and co-leaders will report progress to an executive committee, which will report to a steering committee and an advisory board.

The Svinøy section is located in a confluence region cutting through the two-branched Norwegian Atlantic Current. One basically barotropic slope branch situated just off the shelf break referred to as the Norwegian Atlantic Slope Current (NwASC) and a western baroclinic jet associated with the sub-Arctic Front referred to as the Norwegian Atlantic Front Current (NwAFC). In EMSO the main objective is to continue measurements of currents in the NwASC in order to estimate the transport series of the northward-flowing Atlantic Water. A second objective is to extend transport estimated to also include the NwAFC.

Transports estimated of the NwASC based on current measurements started in 1995 operated by the Geophysical Institute, UoB.  Through the years it has been part of various projects; starting out as an NRC project 1995-1997, and then continuing under EU projects VEINS and ASOF. Since about 2007 continuation of the monitoring has been secured by the personal commitment of Prof. Kjell A Orvik (at UoB) securing the funding. The transport series in the Svinøy section in EMSO is also an integrated part of the repeated hydrographic and plankton surveys performed by the Institute of Marine Research (IMR) since regularly 1977, and glider missions in the southern Norwegian Sea started under EMSO.

In EMSO the main objective is to continue measurements of currents in the NwASC for the continuation of the transport series of the northward-flowing Atlantic Water. The main mooring – S1 – located over the 500 m isobath at 63N, 4E is found to capture the transport variability if the NwASC at time scales exceeding one month.  A second objective is to extend estimates of the transport further west to also include the NwAFC. To reach this objective we use a mooring array of four additional moorings with near-bottom current meters to avoid trawling and combine these measurements with repeated hydrographic section (4-6/year) and satellite sea surface height data.

The main mooring – S1 – located over the 500 m isobath at 63N, 4E is used to estimate transport variability if the NwASC at time scales exceeding one month.  Additionally, four current meter moorings are distributed over 1000, 1500, 2000, and 2500 m isobaths. The current meters are all Aanderaa Seaguard instruments.

Station M is situated at 66°N 2°E in the Norwegian Sea. The area is dynamic with an upper layer of relatively warm and saline Atlantic Water episodically influenced by the fresher Norwegian Coastal Current. A single array deep mooring is deployed at the site.

Station M has a history back to 1948 when it started as one of 13 ocean weather stations (OWS) in the north Atlantic. The station, which is also called OWSM, was operated by weather ships until 2009, and after this, research vessels have visited the station 4-6 times a year. In 1994, the first deep mooring was deployed at the site, and thus, the current activity represents a continuation of long-term observations. Station M has always been a multidisciplinary site, with contributions from physical and chemical oceanography, microbiology, and meteorology. Within the frame of EMSO, physical and chemical measurements are performed at the station.

The time series from the observatory contribute to an improved understanding of short- and long-term variability of water masses and ocean biogeochemistry in the area.

The observatory consists of a single mooring situated between 500 and 2000 m depth, with sensors for temperature, salinity, pressure, and pCO2 measurements. Dissolved oxygen measurements will be included. The mooring was deployed in August 2020 and will be active for a year. Then, a few months of maintenance will take place before the new deployment in late Fall 2021.

Data are downloaded after the mooring is retrieved and will be made available after quality control.

More than thousands seepages of methane, potent greenhouse gas that could enhance climate warming if it reaches the atmosphere, cover the Norwegian and Svalbard continental margins. In particular, a gas hydrate pingo located south of Svalbard is persistently emitting natural gas. Methane bubbles are rising as high as 20 m below the sea level at this location. In EMSO Nordic Sea, the observatory South Cape will consist of a seabed and water column observation aiming at monitoring the methane seepage activity and transport in the water column. In addition, it will monitor oceanographic processes from the seafloor to the sea surface.

The scientific objectives are to estimate i) the seasonal and inter-annual variability of methane release from an intense methane release site south of Svalbard; ii) how high methane is transported; iii) the influence from oceanic setting in this potential variability.

The infrastructure will use an existing seafloor observatory (K-lander) along with a water-column mooring. Both components will be equipped with physical and chemical sensors (hydrophone, ADCP, CTD, pH, CH4 and CO2 sensors). The deployment is scheduled in December 2021 to be confirmed.

The central Fram Strait mooring (F10) is deployed at 78.83°N, 2°W. It captures the recirculating Atlantic Water in the Fram Strait which merges with the East Greenland Current (EGC) to flow southward. The upper-ocean here is marked by the Polar-Atlantic Waterfront and shows alternating fresh and cold Polar Water coming from the EGC and warm and saline Atlantic Water arriving from the West Spitsbergen Current (WSC). The flow is west-southwestward and is significantly stronger in winter, driven by stronger wind forcing over the Greenland Gyre in winter. The returning Atlantic Water gets denser as it gets cooled and is the source water for the Denmark Strait Overflow further south.

The station monitors the hydrographic and current properties of the return Atlantic Water and the eastward extension of the Polar Water in the EGC, allowing to quantify the relationship between atmospheric forcing and sea ice presence with the upper ocean variability. Through added parameters DO and pH/pCO2 it will be possible to quantify year-round variability in ocean chemistry and the relationship with physical oceanography. Long time series will contribute to a better understanding of long-term changes and trends in the ocean and climate system.

The observatory has a history in hydrographic and current measurements dating back to 1997. Instruments measuring temperature, salinity, pressure (Seabird SBE37 or RBR CTD) are mounted at nominal depths of 55-75 m (the front of Polar and Atlantic Water), 250-275 m (Atlantic Water), and at 2600 m (Deep Water). The DO and pH/pCO2 instruments are installed in the upper ocean at ±55-75 m as of 2020/2021. An upward-looking 300 kHz RDI ADPC is installed at 55-75 m while at larger depths single-point Nortek Aquadopp current meters are installed. The mooring will be serviced each year in August-September during the annual cruise of the Norwegian Polar Institute to the Fram Strait to service the Fram Strait Arctic Outflow Observatory.

Gliders will be operated to monitor circulation and water mass properties at key locations in the Nordic Seas (Figure 1). The eastern transects 1 and 2 (Svinøy and Gimsøy) are focused on the Norwegian Atlantic Current. These transects are part of a long-term hydrographic monitoring program, where measurements at Svinøy date back to the 1950s. Transect 3 (Fram Strait) fills the observational gap in the central Fram Strait and monitors properties and variability in the return Atlantic Water along the Polar Front in the northern Nordic Seas. Transects 4 and 5 from the interior Greenland and Iceland Seas toward the east Greenland shelf monitor wintertime open-ocean convection in the western basins of the Nordic Seas and the southbound transport of cold, fresh surface water from the Arctic Ocean and dense water that feeds the lower limb of the Atlantic Meridional Overturning Circulation in the East Greenland Current, as far inshore as the ice edge east of Greenland permits.

The main purpose of the glider transects is the long-term production of high-quality hydrographic measurements across the Nordic Seas. The data will be assimilated into weather prediction models, and delayed mode data will be used for the validation of ocean models. The eastern glider transects sample the Atlantic domain of the Nordic Seas, in particular the Norwegian Atlantic Current. The western transects sample the deep water formation regions of the Greenland and Iceland Seas and, partly, the southbound flow along the east Greenland slope.

Three different types of gliders operate along the transects:

All gliders measure temperature, salinity, and pressure, while depth-averaged velocity is derived from the difference between the glider’s velocity over ground and its velocity through the water.

New Slocum gliders were acquired in fall 2020 and trial deployments were commenced later that year. Following firmware upgrades, all transects will be in full operation from summer 2021 onward.

Link to the Data from ongoing glider missions.

EMSO-Mohn will establish, at the newly discovered hydrothermal Fåvne vent field, a fixed-point seabed-water-column-coupled and wireless observatory with a multidisciplinary approach - from geophysics and physical oceanography to ecology and microbiology. Fåvne vent field is an ultramafic-hosted hydrothermal system located on the ultra-slow spreading Mohn’s ridge where the oceanographic front between the cold waters in the Greenland Sea and the warm waters in the Norwegian Sea meet. It is primarily directed at understanding the dynamics and magnitude of the coupling between the hydrothermal plume, rough bathymetry and oceanographic processes and its impact on the biosphere and surrounding water masses in the Nordic Seas.

Understand the dynamical coupling and feedbacks between the hydrothermal plume with crustal and oceanographic phenomena to quantify i) overall energy and matter fluxes transferred from the Earth System into the overlying Ocean and ii) how it disperses in an oceanographic front over the Mohn’s Ridge.

The observatory is currently in development and is scheduled for deployment in summer 2022. It will be composed of one deep-ocean water-column mooring coupled with a seafloor node, and of a transmission buoy that communicates acoustically with the seafloor station and relays data (hydrothermal, background seawater and oceanographic properties -e.g., pressure, temperature, turbidity, current-, and system status) via satellite to the EMSO data center hosted at the University of Bergen, Norway. The observatory will be complemented with autonomous seafloor instruments, e.g. bio-colonisators collecting microbial and bacterial life associated with those unique environments and additional exit-fluid temperature probes. 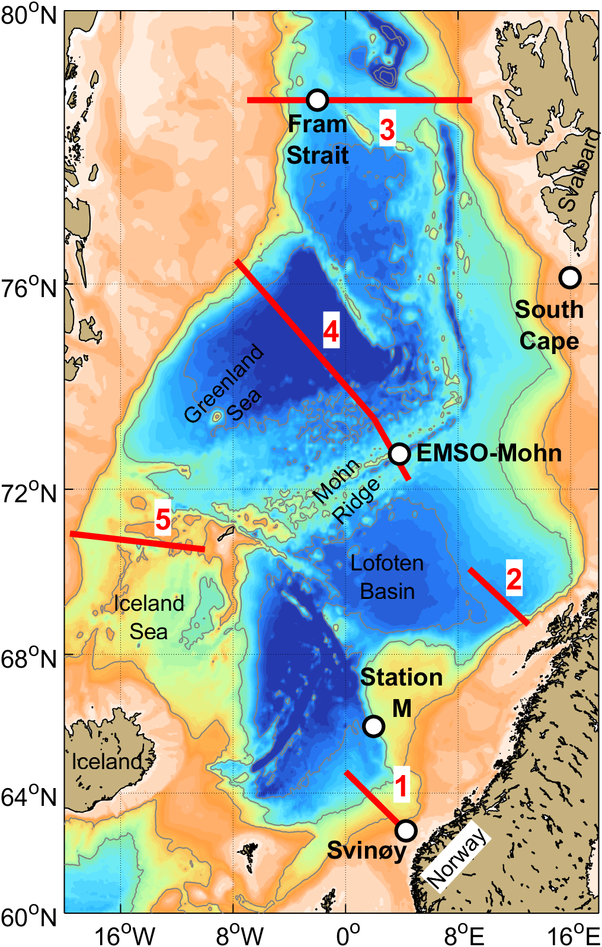 The observatory network in the Nordic Seas will have three main components: moored observatories, gliders, and one seafloor observatory.
Photo:
NorEMSO
25.10.2022