A small but important molecule amongst macromolecular giants

The phosphoinositide PtdIns(4,5)P2 (aka PIP2) shot into fame in the early 80s when this molecule was found to be the precursor of two secondary messengers, diacylglycerol and inositol-1,4,5-trisphosphate (pmid:6146314). Later on, PtdIns(4,5)P2 was also found to be the precursor for PtdIns(3,4,5)P3 (pmid:2833705) a molecule that was later implicated in cancer research but also in other diseases such as type II diabetes. Over the years, its role widened from being an intermediate molecule to a direct sensor for specific binding domains present in a diverse array of proteins. The discovery of these binding domains is the basis for PtdIns(4,5)P2 as a multipotent signalling molecule involved in a wide range of cellular processes.

While PtdIns(4,5)P2 was long thought to be confined to the cytoplasm, it was recently detected in the nuclear matrix (pmid:12728269). The first evidence that nuclei contain a PtdIns(4,5)P2-mediated pathway that is distinct from that in the cytoplasm emerged in the late 80s/beginning of the 90s (pmid:2829840, 1655412). Although it’s nuclear functions and biophysical properties are still unclear, this phospholipid is suspected to pursue a central career in almost all aspects of molecular and cell biology including that of the nucleus.

Research on the role of this molecule in nuclei is currently ongoing in the group of Aurélia E. Lewis, Lab 2 (pmid:21048195) 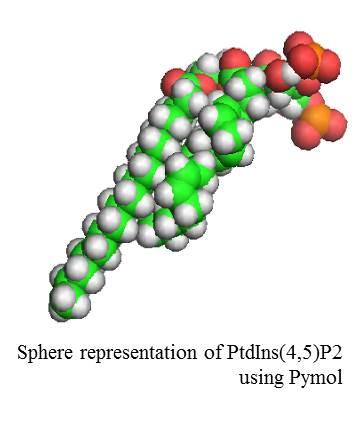