“The ocean has enormous potential. It's not only that we can, but also because we have to produce more from the ocean if we are to avoid climate change,” said Vidar Helgesen aboard tall ship Statsraad Lehmkuhl on World Ocean Day.

AROUND THE WORLD: Tallship Statsraad Lehmkuhl sets out on its first ever circumnavigation of Earth in autumn 2021 – the One Ocean Expedition. Rector Dag Rune Olsen speaking on board the ship at the official launch in August 2020.
Photo:
Eivind Senneset for University of Bergen

Former Minister for Climate and the Environment and now Norway’s Special Envoy for the Ocean Vidar Helgesen visited Bergen on World Ocean Day to speak at a partner meeting for the upcoming One Ocean expedition, the first circumnavigation of Earth undertaken by the 1914 built tall ship Statsraad Lehmkuhl. This will take place from autumn 2021 until spring 2023. The University of Bergen was the first to sign a letter of intent to participate in the expedition, announced in August 2018.

Hopeful for the ocean

Despite being worried about progress on the targets of SDG14, life below water, Helgesen remained optimistic about the state of the ocean.

“The ocean has enormous regenerative potential. Not least, there is great potential for increased seafood production, Helgesen said, referring to the recently presented report The Future from Food of the Sea from the High Level Panel for a Sustainable Ocean Economy,” he said.

He pointed out that this is only 1 of 16 blue papers the Ocean Panel is producing. These should all have been presented at the second UN Conference, which has been postponed from June 2020 to dates TBA. The papers are now published ongoing until October. They include several recommendations on the ocean’s regenerative potential.

“By growing more vegetation at sea, we can curb tidal waves, increase biodiversity and capture carbon. This can reduce pollution and provide materials for new production to replace plastic such as kelp and certain types of seaweed,” said Helgesen.

He praised Norway’s ocean-oriented industries and their regenerative potential.

“The Norwegian shipping industry is at the forefront with a huge success story in Western Norway with electrification of the ferries. But now the focus is also on international shipping. They just presented a climate action plan and from 2030 on, Norwegian shipping companies will only order zero-emission vessels. As of today, these do not exist, but technology and solutions are starting to emerge, not least through the use of hydrogen and ammonia, said the ocean envoy.

He pointed out that the International Maritime Organization (IMO) has set a target of a 50 per cent reduction by 2030.

“To aim for zero emissions shows strong leadership. Not least, there is a great deal of business potential in this for Norway as a nation,” said Helgesen.

Science for One Ocean

Rector Dag Rune Olsen also was at the event and spoke about the University of Bergen's early commitment and continued support for the One Ocean expedition.

“Together we are sailing the world to reveal the ocean’s potential through science,” said the rector.

With this being World Ocean Day, he also underlined the close links the university has to the UN system, not least being Hub institution for SDG14 as appointed by United Nations Academic Impact (UNAI) and brought news of the university’s work with the UN.

“We are proud of the assignment we have received from UNAI to produce five articles on SDG14 called the Sustainable Ocean Series, starting today on World Ocean Day,” said a delighted Rector Olsen.

Helgesen spoke about the turbulent waters ahead for the ocean and praised One Ocean as a practical extension of the work of the Ocean Panel.

“One of the challenges we face is a lack knowledge of the ocean’s problems and opportunities. In this perspective, the One Ocean expedition is absolutely fantastic. It is an opportunity to wake people up to see the challenges and mobilize and market the solutions for a sustainable ocean,” said Norway’s Special Ocean Envoy Vidar Helgesen. 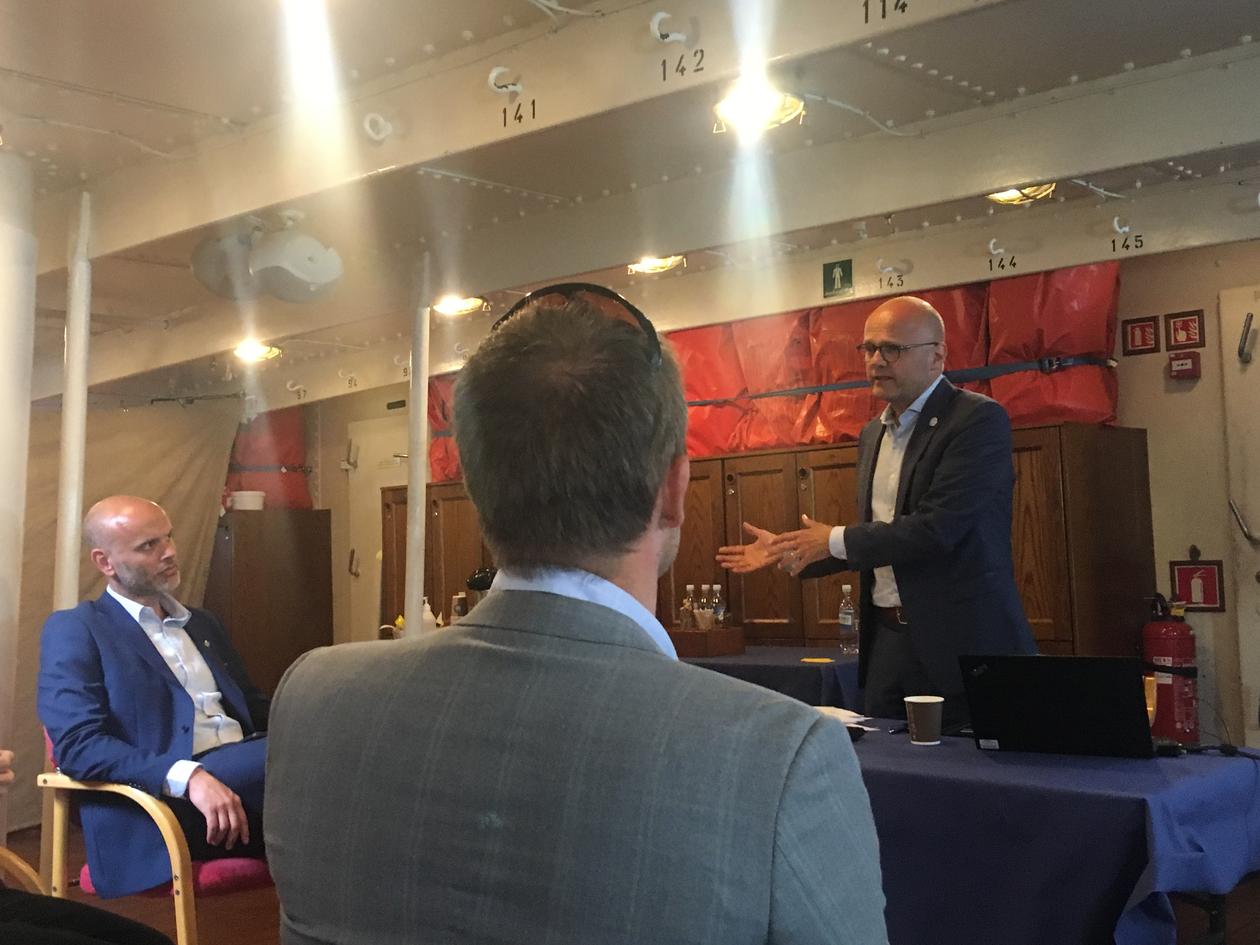 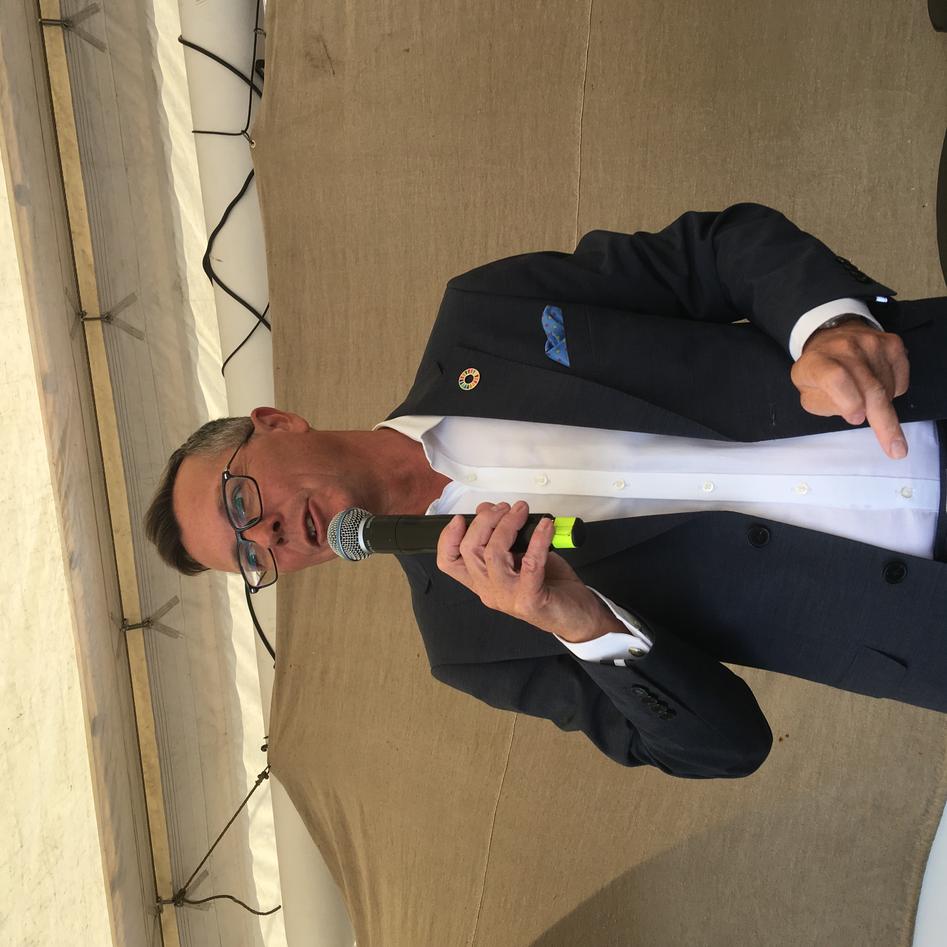 THE OCEAN RECTOR: Rector Dag Rune Olsen spoke of the University of Bergen’s commitment to SDG14 and the One Ocean expedition.
Photo:
Sverre Ole Drønen, UiB