The two prints at the Faculty of Law were both made relatively late, in 1986, and do not have the same political clarity as Kleiva's earlier work. The poetic titles Mellom djevelen og det djupe svarte (Between the devil and the deep blackness) and Skulle gjerne vite kva dei tenkjer og trur (I should like to know what they think and believe), suggest that Per Kleiva is exploring more personal relationships in his mature art.

Between the Devil and the Deep Blackness

In Mellom djevelen og det djupe svarte (Between the devil and the deep blackness) most of the picture is deeply black. Against this background, two lighter figures are presented. The blue male figure, reclining almost horizontal, is extending his one foot up towards the arm of the red female figure, hanging upside down from the top of the picture and twisting to reach the man’s foot. The hand and foot reaching towards each other is a clear reference to Michelangelo’s famous image of God and Adam, where the fingertips touching are in focus. What does it mean that in this picture the contact is hand to foot, not hand to hand? Feet are often considered to be dirtier than hands, they are not washed as often.

Is the woman a devil? She takes God’s place in the picture, stretching downwards, and red is usually thought to be the devil’s color. The man is less active, he is laidback, only the foot that extends upwards to the woman is clearly in motion. The two kiss marks in blue and pink highlights that there is a sexual and gender related meaning to the image.

Skulle gjerne vite kva dei tenkjer og trur (Should like to know what they think and believe) depicts two identical male heads lying sideways, separate ways. The heads are disembodied, floating inside a doubled house shape. Everything in the picture is reversed, repeated. The two male heads look confused. Along each side of the house shape, we see the profile of a woman; on the left side she is upside down. She is colored in Rastafari, green forehead, yellow cheeks, red neck. The background is black. In the upper field of the image, where we might expect to find a sky, we see silver-white plant leaves, emerging from the shadows.

The picture is characterized by head-spinning confusion. The pervasive Surrealism manages to convey the idea of different ways of thinking and a lack of communication. Throughout his career, Kleiva has touched on many themes and styles. Still, we can see a common factor to his art in the combination of quick wit and a lyrical sense of form.

Per Kleiva (1933-) attracted notice at the end of the 1960s as one of the earliest and most important pop artists in Norway. He was among those who took the pop culture in an explicitly political direction, as opposed to Americans like Andy Warhol and Roy Lichtenstein. Kleiva’s perhaps most famous pictures are the three silk prints that make up Blad frå imperialismens dagbok (Pages from the diary of imperialism) from 1971. In criticizing the Vietnam War soldiers’ boots, helicopters and a bomb cloud, respectively, appear over a beautiful green landscape that remains identical in all three pictures. Kleiva’s art has been purchased by the National Gallery, Arts Council Norway, the National Museum in Warsaw, Wroclow and Poznan in Poland, and the Aarhus Art Museum in Denmark, to mention a few. He has carried out numerous public art commissions, illustrations and portraits, and has received several international awards. 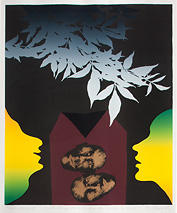