Robert Kloster (1905-1979) was the first professor of art history at the University of Bergen. The bronze bust portrays him at a large scale, as a strict, visionary man.

Robert Kloster’s interest in style analysis, the subject of research, and cultural centers and peripheries greatly influenced the development of the discipline of art history in Bergen. Kloster was particularly interested in Norwegian folk art, but his research also included silversmith art, Renaissance art and western Norwegian church architecture. Kloster began as a curator at the Stavanger Museum in 1929, and in 1932 he became assistant director at the Cultural Department of the Bergen Museum, which later became the University of Bergen. In 1934 he helped found the Association of Old Bergen. Kloster was the director of Vestlandske Kunstindustrimuseum 1949-64. When he was appointed professor at the UoB in 1964, he simultaneously became head of the Department of Cultural History of the Historical Museum.

After World War II came years of reconstruction, and Kloster became involved in the restoration and decoration of Håkonshallen. Especially in the effort to rebuild the severely wrecked Rosenkrantz Tower, his insights were invaluable, and he was the inspector of the Tower until 1976. Kloster was an honorary doctor at the University of Aberdeen, and was awarded the Eligium medal of the Bergen goldsmith guild. He received the Icelandic Order of the Falcon and the French Legion of Honour, and in 1954 he was appointed officer of the Order of St. Olav.

Gunnerud’s wife Kirsten recalls when Kloster modeled for the bust:"As usual, our interaction was easy and cheerful, with periods of silence and intense concentration. After long sessions of intense work spanning several days, I suddenly see my husband dancing as if in a trance around the cavalet, touching the portrait here and there. This lasted maybe two or three minutes, then he paused and said: it is finished! RK and I looked at each other, totally stunned by what we had observed. Later RK commented on this experience, saying that it was the first time in his life he had witnessed a creative act. He also expressed great satisfaction with the portrait".

The noble, strict character Gunnerud gave to Kloster's bronze bust, which may bring to mind the ancient Roman senators, expressed one part of his personality. In other contexts, the art historian was a cheerful and good-natured man, but many of Klosters former students will remember his imposing appearance in the lecture halls. Both its expression and the location in the Humanities building shows the importance of this art historian to the milieu at the UoB.

Renowned sculptor Arne Vinje Gunnerud (1930-2007) was inspired by myths, legends and fairy tales, as well as by African and Chinese art forms. He was made a Knight of the Order of St. Olav in 2001, and received the Ingeborg og Per Palle Storm honorary award in 2005. Gunnerud represented Norway at the Biennale of Sao Paulo in 1969. In 1978 he was the Festival artist at the Bergen International Festival. 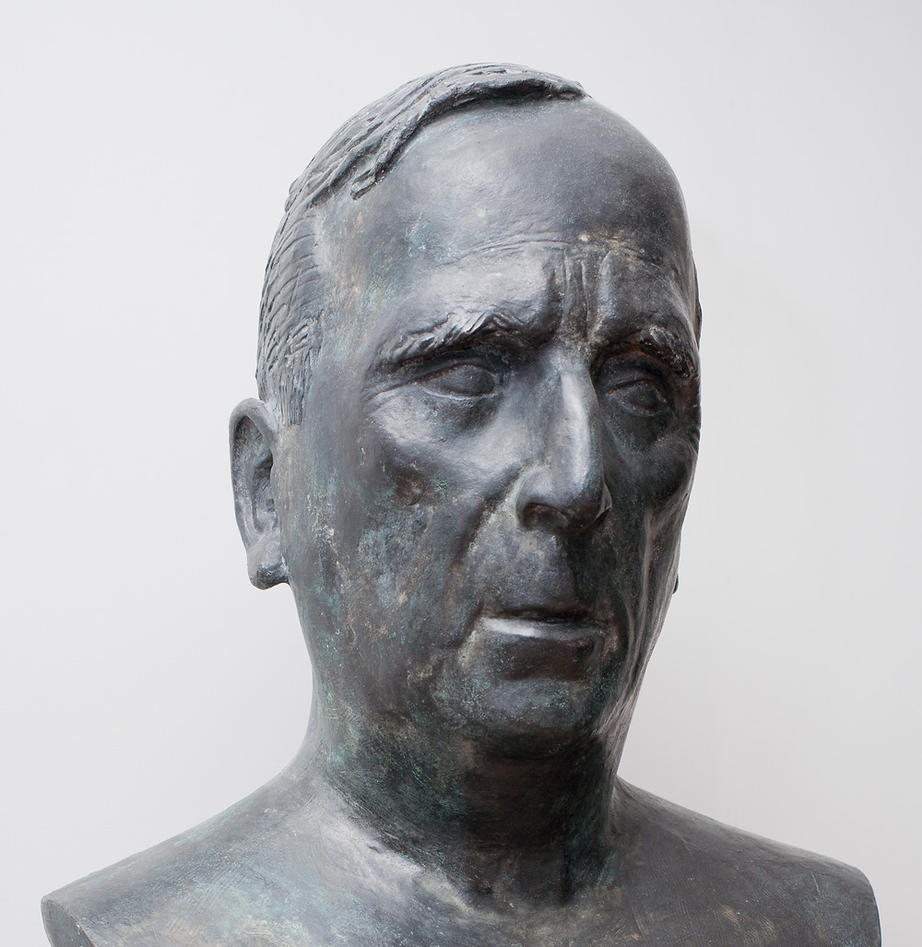