Plato is one of the greatest philosophers and literati in world history. Through his writings, preserved from fourth-century Athens, he has had enormous influence on the future of thinking, especially in the West and the Middle East. Plato is particularly known for his idea of a World of Forms that exists parallel to our visible reality, where all things have their eternal archetype. His most famous illustration of this idea is called the "Allegory of the Cave".

Plato was a student of Socrates. We know his teachings only through the texts of Plato, so it is difficult to determine how much of Plato's ideas are present in what we today call Socrates's philosophy. Plato is also known as the founder of the Academy, which is considered to be the world's first higher education institution. One of his students was Aristotle. Plato's philosophy is believed to have been the first to touch on all the five main branches of philosophy: metaphysics, epistemology, ethics, politics and aesthetics.

The bust at the Department of Philosophy is probably ancient, and certainly very old. We do not know who created it, and cannot be sure that it is actually a representation of Plato. The marble has gained a dark tone with age, the nose is worn away and chunks of stone are missing around the neck. Plato is wearing some sort of a hat or wreath, and his face is framed by a rich mane of hair. His beard is lush and full. The eyes gaze outwards - perhaps into the World of Forms? 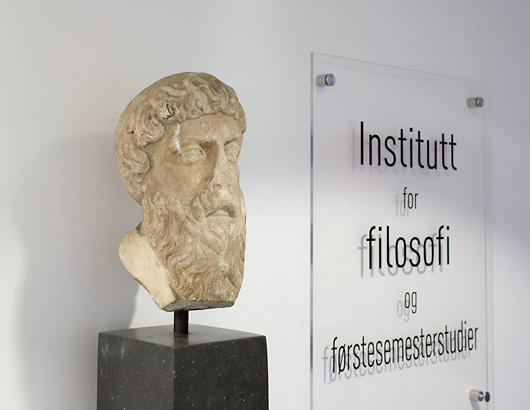