Cancer growth depends to a large extent on a continuous supply of nutrients by new blood vessels that grow into the tumour. This process is called ”tumour angiogenesis”, and is regulated by an interaction between cancer cells and normal cells.

A strong focus in the scientific community has been on identifying and validating novel therapeutic targets that regulate tumour angiogenesis. A high number of  therapeutic compounds have been developed that  inhibit the growth of tumour blood vessels where the most prominent has been the monoclonal antibody bevacizumab that inhibit the vascular endothelial growth factor VEGF.  Yet, clinical studies have shown that many tumor types, including glioblastomas, develop escape mechanisms towards anti-angiogenic therapy. Although several mechanisms have been proposed, the exact mechanism by which GBMs escape bevacizumab treatment remains enigmatic.

We have developed animal glioblastoma models where we study the mechanisms leading to angiogenesis independent growth. By the identification of such mechanisms, our aim is to develop novel combinatorial treatment strategies targeting the adaptive response to anti-angiogenic therapy.

Tumor cell invasiveness is a critical challenge in the clinical management of glioma patients. In addition, there is accumulating evidence that current therapeutic modalities, including anti-angiogenic therapy and radiotherapy, can enhance glioma invasiveness. Below is a schematic presentation on how malignant gliomas grow in the human brain as well as an example og our human glioblastoma xenografts growing in the immunodeficient rat brain.

We have an active research programme focusing on delineating the mechanisms behind the invasive growth of human GBMs where a specific focus is on the Epidermal Growth Factor Receptor (EGFR) system and downstream cell signaling events involved in invasive  growth.

Tumor cells are highly adaptive and can optimize their metabolism for proliferation, build-up of biomass and survival under conditions of stress.

We are particularly interested in the metabolic adaptations that allow tumor cells to survive in hypoxic areas and in monitoring possible effects of anti-angiogenic treatment in glioblastomas. In cooperation with other laboratories, we analyse the metabolites extracted from tumor tissues using different mass spectrometry based methods (GC-MS, LC-MS). Furthermore, we are in the process of mapping the human GBM metabolome using 13C6-glucose metabolomic flux analysis in patients.

The figure below shows the strategy for mapping the human GBM metabolome. Patients are infused with 13C6-glucose, before surgery. Under surgery defined biopsies are selected for LC-MS metabolic flux analysis.

Brain metastasis is a complication occurring in one third of all cancer patients. The most common cancers giving rise to brain metastases are lung cancer, breast cancer, skin cancer (melanoma) and cancers from the gastrointestinal tract. The prognosis is poor. Treatment strategies available today show minimal effects, as current chemotherapeutic agents are ineffective. The Brain Metastasis Research Group at the KG Jebsen Brain Tumour Research Centre focuses on determining molecular mechanisms which drives metastasis to the brain, in order to find new therapeutic strategies.

We have developed novel model systems where tumour cells from human brain metastases are injected into the blood stream of immunodeficient mice, and the cells metastasize to the mouse brain. This animal model recapitulates most steps of the metastatic cascade, and a better understanding of the molecular mechanisms behind tumor metastasis may thus be obtained.

We are using advanced preclinical imaging – magnetic resonance imaging (MRI), positron emission tomography (PET) and bioluminescence imaging (BLI) – to show that metastatic tumour development in the animal models are very similar to what is seen in the clinic. More information on the imaging modalities can be found here.

We are currently expanding on the imaging technology, by implementing novel theranostic nanoprobes to deliver therapeutics directly to the animal brain metastases. Also, we are trying to increase drug delivery to these metastases, by using new compounds which are able to open the blood brain barrier. In an ongoing project where we have performed gene expression analysis on animal brain metastases, we have found several compounds that may have significant therapeutic effects in the clinic.

Based on the implantation of human GBM-derived spheroid cultures, we have generated clinically-relevant mouse models that recapitulate the major characteristics associated with GBMs including angiogenesis and tumor invasion.
The tumour xenografts obtained in these animals appear either angiogenic – displaying abnormal blood vessels, or highly invasive, depending on the patient’s GBMs used for implantation.  In order to study how tumors are communicating with the host cells, we have also developed immunodeficient eGFP expressing mouse models that allow us to study in detail how the tumors are communicating with the host cells.

These models  greatly facilitate the dissection of the biological mechanisms behind angiogenesis and tumor invasion and represent important tools for clinically relevant therapeutic intervention studies, which are crucial for developing novel treatment strategies.

The GBM animal models, previously described above, allows us to study the tumour bulk. However, it does not represent the clinical situation following surgery that most patients undergo, with subsequent adjuvant radiotherapy and concomitant chemotherapy. Thus, therapeutic studies on brain tumours should optimally take into consideration the tumour cells that are left behind after surgery, i.e those cells we are unable to remove, and that infiltrate the surrounding parenchyma, eventually giving rise to tumour recurrence. To address these limitations we are currently establishing a novel model that mimics the setting after surgical resection in GBM patients. This method involves implantation of human GBM tissue followed by resection of the resulting tumour, cranial defect repair and monitoring of tumour recurrence using MRI and animal PET/CT scans. Moreover, because of the cranial defect repair, the isolation of the surgical resection cavity from direct continuation with the subgaleal space allows the animals can be treated by cytotoxic agents with directly intracavity delivery. 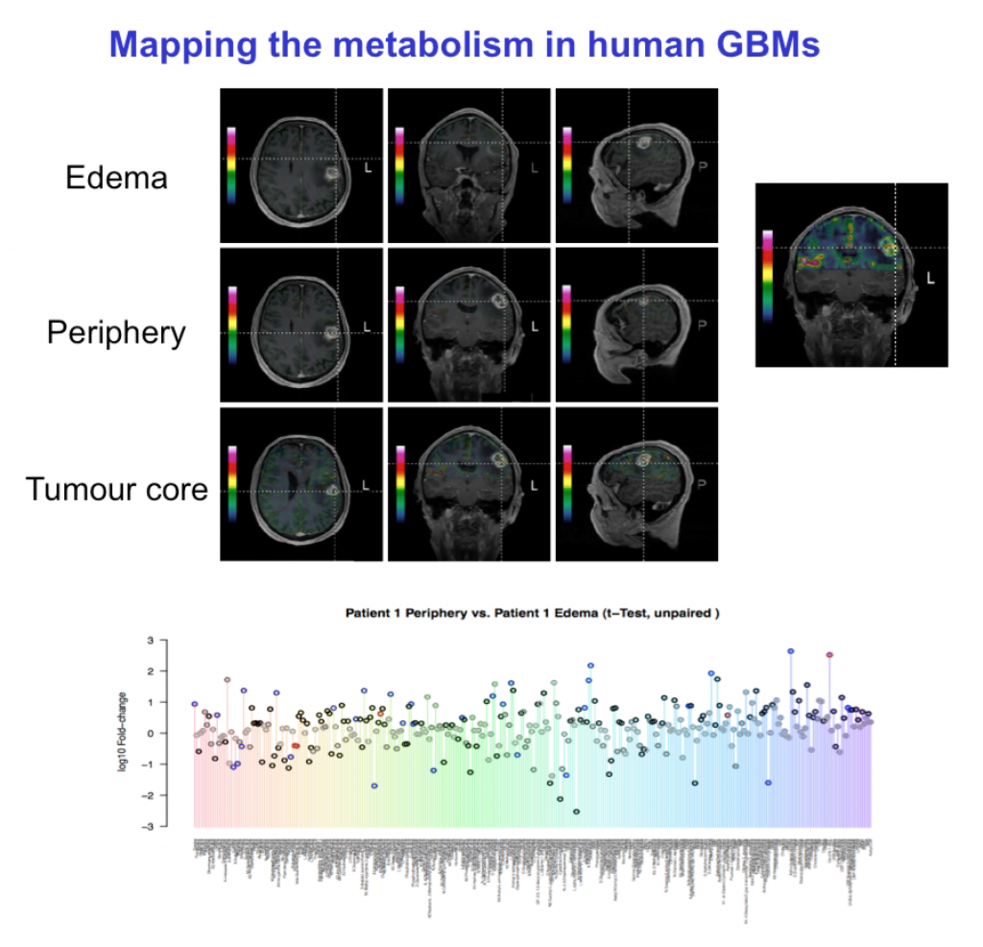 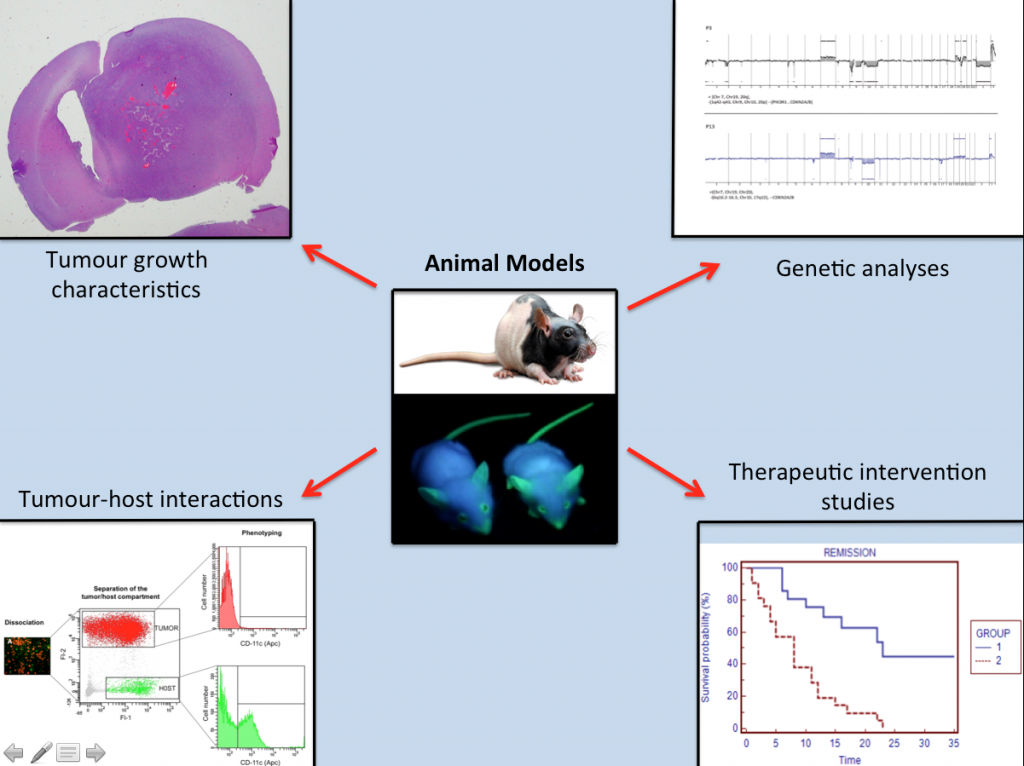