A reasonable arrangement of wind turbines in a farm is essential for optimum energy efficiency and load reduction. In addition to the widely discussed wake interaction effects, the research community recently has been debating wind farm blockage effects. In large, tightly spaced wind farms, a higher reduction in upstream wind speeds has been observed, causing additional losses in kinetic energy, which is not being captured by most state-of-the-art wind farm models.

This set of lab-scale experiments investigates velocity deficits and turbulent kinetic energy development in small wind farm setups of three to seven turbines, in a submerged arrangement of actuator discs the MarinLab towing tank at HVL.

From the experiments performed, it has been observed that a setup of aligned turbines experiences the most significant velocity deficit upstream, and the slowest recovery for the wake. In contrast to that, a setup with laterally offset turbines had the lowest speed loss in front of the discs upstream and the fastest regeneration of the flow rate. The upstream induction zone in front of the central first-row turbine was not observed to be significantly influenced by the investigated wind farm setups in this set of experiments. A rather small number of turbines at a sufficiently large spacing are assumed to be the main reasons for not observing an additional upstream velocity reduction.

Camilla Hamre Aasnæs, master student in Ocean and Technology at UoB and HVL

Joakim R. Bjørnsen, master student in Ocean and Technology at UoB and HVL 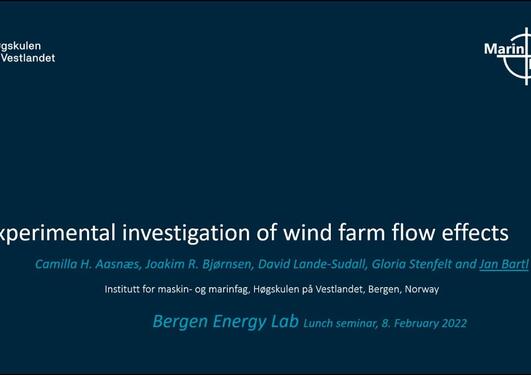