The Shatila refugee camp in Beirut holds more than 20,000 people on an area smaller than four football fields, making it one of the most densely populated places in the world. Despite being over-researched by scholars and overrepresented in the media, little attention has been given to Shatila’s built environment; how it is shaped, what it expresses and the logic behind it.

To this end the seminar focuses on placemaking, encampment and vernacular architecture and discusses this in relation to a speculative reaction to the West’s role in the camp’s ecosystem: a proposed hotel inside the camp as a new form of sustainable market-driven aid and development.

The seminar is linked to research projects at CMI funded by the Research Council of Norway (RCN) on regional encampment and urban refugees (#ME_SuperCamp, #URBAN3DP)

Bjørnar Haveland is a Bergen based architect with a special interest in how the built environment affect human rights, and leader of Byrop.  (BA U. Michigan), MA (BAS, Bergen). As Raul Wallenberg '15 fellow at the University of Michigan he spent a year in Shatila learning about connections between architecture and identity in protracted camps (2015-16) and now works at Kaleidoscope Nordic.  This seminar is based on his MA-thesis titled The Island of (in)stability, or a hotel for visiting foreigners in the middle of town 2019.

Are John Knudsen (introduction) is a senior researcher at CMI. He specializes on micro-conflict, forced displacement and urban refugees.

Kjersti Berg (discussant) is the Post-doctoral researcher on the FRIPRO project "SuperCamp: Genealogies of humanitarian containment in the Middle East".

Make time to look at the exhibition from this project.

It will be on display at Bergen Global from 3-10 Oct. 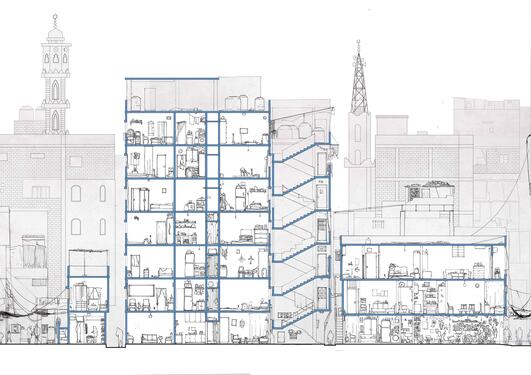 Shatila: The island of (in)stability

A portrait of a refugee camp told through architecture.