A new picture of the last ice age

A new reconstruction of this ice sheet shows the interaction between climate and glaciers - how the ice sheet grows and retreats.

MAPPING CLIMATE CHANGES: Evolution of the Eurasian ice sheets 25,000-10,000 years ago as based on the DATED-1 time-slice maps.
Photo:
Anna Hughes

At the peak of the last ice age, a vast ice sheet covered northern Europe, spanning from the British Isles, across Scandinavia and into Russia in the east and the Barents Sea in the north.

“It has been several years of painstaking research. We have gone through all the existing literature from the last 50 years and it has been a lot of work to compile and assimilate the accumulated data,” says Anna Hughes, geologist at the University of Bergen and the Bjerknes Centre for Climate Research.

Hughes and her colleagues at the Department of Earth Science have since 2005 compiled and evaluated published dates and geological observations relevant to reconstruct the growth and retreat of ice during the last ice age. The new compilation of more than 5000 dates spans an area from the continental shelf west of Ireland and onto the Russian Plain in the east. The result is the first version of the database DATED (DATabase of Eurasian Deglaciation), now available for the scientific community at the PANGEA data publisher web site.

The large ice sheets that covered North America and northern Europe during the ice ages represent the most dramatic effects of natural climate change.

On the basis of the new compilation, the geologists have constructed a series of maps showing how ice sheets grew and retreated across northern Europe, Russia and the Barents Sea 40,000-10,000 years ago. This reconstruction shows how the ice sheets varied in size over time. A similar synthesis has not been conducted since 1981, when only a few handfuls of dates were available.

“With this new reconstruction, the picture we have of Eurasia during the last ice age has taken a major step forward. These huge former ice sheets have been studied for more than 100 years, but our knowledge of their chronology, when and how fast they grew and retreated is limited. The ice sheet covers many countries, for good reasons such as time and funding, geologists tend to focus on one field site at a time. We need a synthesis of all the information from these sites, to truly understand the ice sheet behaviour; in particular numerical modellers need a picture of the whole ice sheet”, Hughes explains.

“The new reconstruction is important for anyone wanting to understand the interaction between glaciers and climate through the last ice age, and forms a new basis for future work, including numerical modelling of ice sheets and climate”, she emphasises.

Differences between east and west

The results show large regional variations, for example, the ice reached the continental shelf west of Ireland around 27,000 years ago, but it took 7000 more years before ice would reach the maximum eastern extent in northern Russia. Similarly the ice melted away faster in the west than in the east.

One of the more surprising scientific facts is that the ice sheet had a different shape in the east than in the west. Although the centre of the ice moved from the Scandinavian Mountains towards the east as the ice expanded, the terrestrial eastern margin extended almost twice as far from the centre than the western marine-terminating margin, resulting in an asymmetric ice sheet.

“We expect ice sheets to be more symmetrical, but it is thinner and more extensive in the east. This is likely due to the different climatic and topographic settings and the different styles of the ice margins, but a definitive explanation for this remains elusive,” Anna Hughes says.

During growth and retreat there were several separate ice sheets; the largest centred over Scandinavia and extending into continental Europe and Russia across the Baltic Sea. Another covered the Barents Sea and Svalbard, while the smallest ice sheet covered the British Isles.

At maximum size, the Eurasian ice sheet was a continuous ice mass more than 3 times as large as the Greenland Ice Sheet is today and contributed to a lowering of the world’s oceans by about 24 meters.

Unique to the new reconstructions is the identification of the locations and time-periods of greatest uncertainty. For some periods uncertainty in the location of the ice margin is as much as 500 km and one of the most important uncertainties is when the different ice sheets joined and separated.

“In this compilation we have highlighted the data gaps, and some spots where we have contradicting, but apparently equally robust data. Deciding which is correct requires further work by the research community”, Anna Hughes says.

From 25,000 to 10,000 years ago ice extent has been reconstructed every 1000 years, to generate 16 maps of the ice evolution. Four additional maps show the earlier phases of the ice age when the ice sheets were small.

All of the data and the reconstructions are now available for anyone wanting to understand the interaction between glaciers and climate through the last ice age, and forms a new basis for future work, including numerical modelling of ice sheets, climate and sea level.

The database will continue to grow, with new versions in the future. 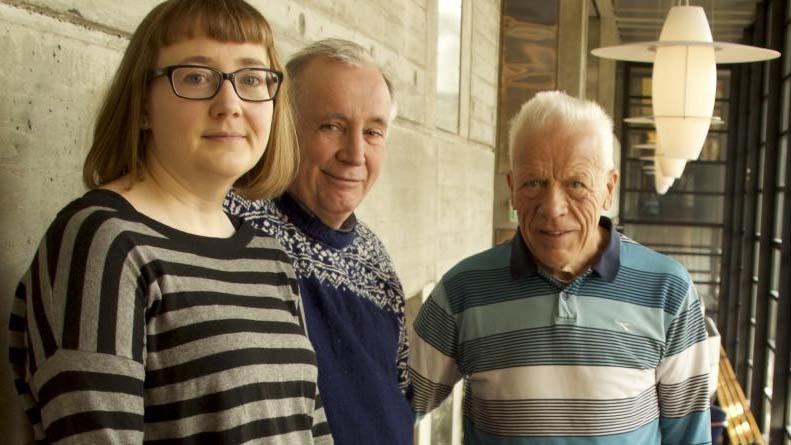 The new reconstruction is bridging the gap between the modellers and the field-scientists. From the left geologist Anna Hughes, professor John-Inge Svendsen and professor Jan Mangerud, all at the Department of Earth Science UiB and the Bjerknes Centre.
Photo:
Gudrun Urd Sylte