There has not been added a translated version of this content. You can either try searching or go to the "area" home page to see if you can find the information there
MASTER'S THESIS

"I love my country, but it needs to change": An ethnography of defiance, public space, and migration among young middle-class women in Tehran, Iran

This thesis describes several aspects of the everyday lives of some young middle-class Tehrani women, explores how they navigate public spaces in the city, and deals with government issued restrictions simultaneously. Throughout the thesis, I explore three aspects of young women’s everyday lives in Tehran: their transgressions of rules regulating dress and public conduct, their attempts at claiming their right to be present in public spaces on their own terms, and their aspirations of migration and views on the future. The main research question is: how do young women express defiance against the current political and social situation in Iran through clothing practices, behavior in public places, and migration? During fieldwork, I observed women’s dress practices and behavioral patterns in public spaces, which are not always in accordance with the law. The problem with the modesty laws is that they are vaguely defined in the Penal Code, which leaves room for interpretation. This is problematic because there is not a specifically defined framework for either authorities or civilians to refer to when it comes to clothing practice. Knee-length and loose fitting overcoats with long arms and neutral colors, long pants, closed shoes, and a headscarf that covers all of the woman’s hair, is considered an implicit norm for what is a “properly modest” outfit for a woman to wear in public spaces. Outfits that differ from this norm are labelled badhejab. Through this thesis, I will investigate how young women deal with and understand the mandatory dress code and other government issued restrictions they face on an everyday basis. I observed my female informants elegantly circumvent the words of the Penal Code, expressing their autonomy and individuality without directly violating the mandatory dress code. My informants were all born after the Islamic Revolution of 1979, and life in the Islamic Republic is all they have ever known. In a public context that can be hostile towards women, I observed that my informants were constantly attempting to be present in public spaces on their own terms, and expressing individuality in public spaces in Tehran. Migration was a ubiquitous issue in everyday conversations during my fieldwork. Whether it was concrete plans of migration, or dreams or aspirations of migration, young people in general were concerned with this issue. The main argument my informants presented for migrating to either Europe or the US was “the chance for a better life”. Many were pessimistic about the social situation of the country, and saw no bright future for themselves if they stayed. However, the road to a visa is not easy. During my fieldwork, I followed the visa application process of several of my informants, and few were successful. Others did not have concrete plans of migration, and spoke of their family as one of the major reasons why they could not picture themselves leaving Iran. Many worried about who would care for their parents back in Iran if they migrated. Even though many did not have concrete plans, they still reflected on the issue and imagined how their life would look like if they lived in another place. I will explore these ‘imagined lives’ and concrete plans, and argue that many young Iranians view migration as a ‘last resort’ solution to their discontent with the social and political situation in Iran, and to achieving what they describe as “a better life” in the US or Europe. I also argue that migration, like clothing practices, is an expression of defiance that young people in Tehran utilize, lacking other options. By relocating their lives to another continent, they are sending a clear message to the political authorities: “You do not provide us with the necessary resources to create a good life for ourselves in this country”. 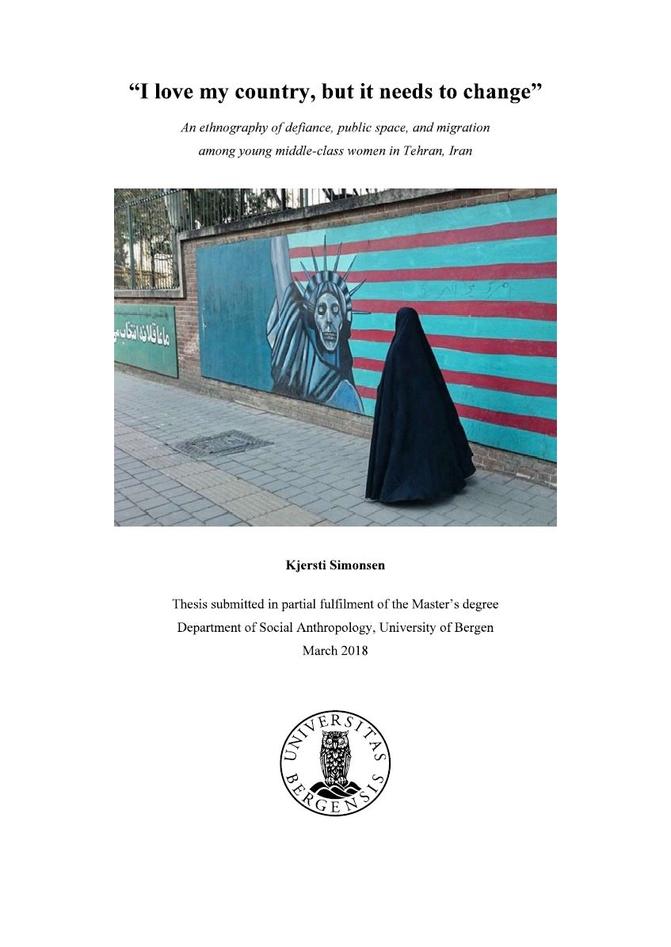