The aesthetics of earthquake reconstruction in Nepal

Questions of aesthetics and cultural identity add layers of complexity to the reconstruction process that cannot – and should not – be ignored.

People are living in corrugated metal sheds which are unbearably hot in summer and correspondingly cold in winter.
Photo:
Tor Halfdan Aase

When I visited Nepal half a year after the devastating 2015 earthquake, no reconstruction had been initiated. Villagers lived in temporary sheds raised on the ruins of their dwellings and concentrated efforts on saving the harvest, giving first priority to food security. They waited for the government to distribute the promised NPR 300,000 (USD 3,000) to each affected household, which would be issued on the condition that they erected more earthquake-safe houses. Instructions on how to build such houses would follow.

Now, one and a half years after the earthquake, little has been done in the affected villages. People live in sheds of corrugated metal supplied by the government (the metal, not the sheds!). The sheds are freezing cold in winter and fiery hot in summer, cramped and generally unpleasant as long-term accommodation. Why haven’t people started reconstructing their former dwellings?

It is easy to blame the government, and many people and media do so. The funds are there, supplied by generous donor countries, but for some reason they are not distributed to those in need. A slow and ineffective bureaucracy is one explanation; corruption is another (Nepal recently fell from #90 to 127 on the ranking list of Transparency International). These circumstances certainly contribute to the slow reconstruction, but it suggests that villagers bear some of the blame themselves.

In every affected village, posters that give detailed instructions about how to build earthquake-secure houses have been set up. Each household that builds a new house in accordance with the instructions shall be allotted NPR 300,000. Not very surprisingly, the number of households has suddenly proliferated. If a household comprising adult sons and daughters splits into three, they can demand threefold subsidies, that is, NPR 900,000. The natural process of household fission has thus accelerated, creating problems for the Government to figure out which households (nepli: pariwar) are real and which ones are fake. Obviously, this further prolongs the bureaucratic process.

A less obvious reason for the delayed reconstruction has to do with ethnicity and cultural norms. Villages situated on the ridges (2200-2600 m asl) are largely inhabited by Buddhists originating from Tibet. These communities are characterized by a widespread need for consensus in village matters. The dilemma of reconstruction is whether houses should be rebuilt in traditional style with stone walls and pitched roofs, or whether ‘modern’ concrete houses with flat roofs should be allowed. Villages are divided on this issue. Some argue that architecture is part of their identity, while others have a more practical attitude. As long as such issues are being debated in village councils, households are barred from rebuilding.

Thus, the absence of active reconstruction is not simply a matter of a malfunctioning state. Not surprisingly, affected people endeavor to get maximum benefit out of the promised relief. And although developing safe and affordable housing as rapidly as possible might seem like an obvious task, it’s not enough to simply provide a roof to those who have lost everything. Questions of aesthetics and cultural identity add layers of complexity to the reconstruction process that cannot – and should not – be ignored.

This article was posted in the Mountain Reasearch Initiative 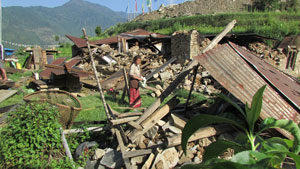 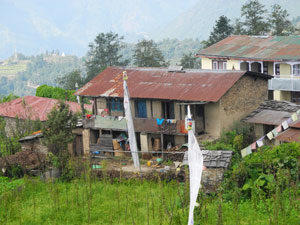 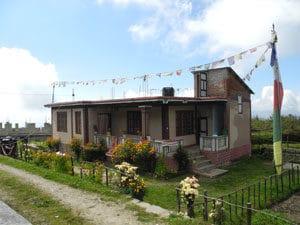 …or should ‘modern’ houses be allowed?
Photo:
Tor Halfdan Aase