Be aware of languages

Language is everywhere. We are surrounded by it, use it to express ourselves, to think, to learn, to act, to communicate. Language is therefore one of our highest goods. This good is not just one language but a multitude of different languages, dialects, accents, varieties and registers.

It is a declared aim of the European Union to promote multilingualism within the EU (https://ec.europa.eu/education/policies/multilingualism/about-multilingualism-policy_en). Concerning language learning at school this means both teaching and learning foreign languages and using the languages the students bring with them as a resource. There is a wide range and diversity of family languages in many schools. In the class I was teaching, for instance, there were 16 students speaking 12 languages. I will take that class as an example to show in what way language diversity and multilingualism can be used as a resource to raise Language Awareness and support language learning. The students in the class are so-called newly-arrived students, who are taught German as a second language in a preparation class. The aim is for them to change to a regular class within two years. By then they need to develop their language proficiency in German so that they are able to actively take part in lessons.

Although the student body in general is multilingual, schools often assume that students are monolingual. This view was once called the monolingual habitus of the multilingual school by Ingrid Gogolin, a German educational researcher. Due to the richness of languages at schools, didactic approaches to use and value these resources are needed. One way to teach languages considering and fostering multilingualism is the approach of Language Awareness.

According to the Association for Language Awareness “Language Awareness can be defined as explicit knowledge about language, and conscious perception and sensitivity in language learning, language teaching and language use.” (https://lexically.net/ala/la_defined.htm) Language is not understood as grammar or vocabulary only. It also includes sociocultural, pragmatic and intercultural aspects like nonverbal communication, language discrimination (Gürsoy 2010: 2; https://www.uni-due.de/imperia/md/content/prodaz/la.pdf) and power relations, and it takes different language registers into account. Raising Language Awareness among students for instance by including the students’ family languages in the classroom pursues several goals. It is meant to actively establish acceptance of the linguistic diversity in the classroom and can have positive motivational effects. It also aims at fostering the students’ curiosity and interest in languages and linguistic diversity and strengthening the analytical competencies of students, for instance by comparing languages. In addition, a Language Awareness approach supports the development of metalinguistic communication and enables students to reflect on the relation of language use and power (ibid.: 1 f.).

In one lessons, we read a version of the fairy tale “Die Bremer Stadtmusikanten” of the Gebrüder Grimm (The brothers Grimm: The Bremen town musicians). In that fairy tale, four animals leave their cruel owners to become musicians in the town of Bremen. The students found it funny that the cock cries out “Kikeriki” in German and spontaneously named the sounds the cock would make in languages they knew. This student-initiated comparison was rooted in their own linguistic repertoires and showed that they already had developed some kind of Language Awareness. After that we jointly explored and compared the sounds other animals make in different languages. Even though this was just a short incident, it allowed the students to jointly think and reflect about languages and contribute with their own knowledge. Allowing and actively supporting incidents like these during lessons shows the students a positive view towards language diversity and values their language resources.

After reading the fairy tale, the students wanted to tell the class about other fairy tales, legends, myth and fables they knew. In the following lessons, we discussed different kinds of narratives. The students could contribute with knowledge they already had from their schooling before they came to Germany. Using their previously established content knowledge helped the students to develop a deeper understanding of how the genre of fairy tales and other narratives works differently and what narratives in different cultures and languages have in common.

In another lesson a teacher-initiated comparison of languages took place. The students were at that time engaged in learning that subordinate clauses with “weil” (because) in German change the position of the verb: Ich höre gerne Musik. Ich finde Musik schön. vs. Ich höre gerne Musik, weil ich Musik schön finde. The students were asked to translate a sentence from German into another language they knew. Volunteers were then asked to write that sentence on the whiteboard (see figure 1) and underline the verbs. After that, the students were asked to compare the sentences in dyads. They noticed that the verb has different positions in different languages, that the writing systems and writing directions differed and that the word music was similar in many languages. This one sentence led the students to find out how differently languages, both written and spoken, are structured.

The described situations show in what way Language Awareness can be raised concerning different levels of language. By regarding the students’ language repertoire as valuable resources and including them in teaching and learning, students can develop analytical competencies in different languages and registers. 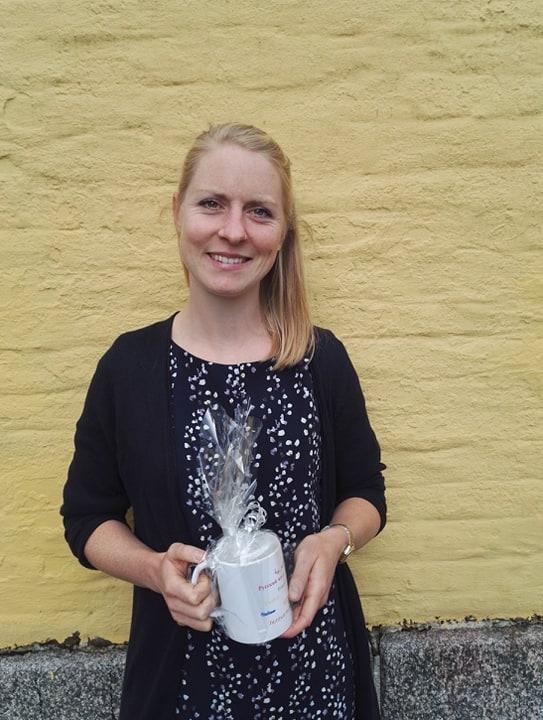 Göntje Erichsen in UiB during her visit within the Erasmus+ programme.
Photo:
by Åsta Haukås