Existence and Uniqueness of Non-linear, Possibly Degenerate Parabolic PDEs, with Applications to Flow in Porous Media, 2017

In the branch of mathematical analysis known as functional analysis, one mainly studies functions defined on vector spaces. For partial differential equations (PDEs), this analysis has proven to be a mighty resource of understanding and modelling the behavior of the equations. Throughout this thesis, the work will focus of theory of function spaces and existence and uniqueness theorems for variational formulations in normed vector spaces. We will recast PDEs as variational problems with operators acting on normed spaces, and further seek to prove the existence and uniqueness of a solution by assigning certain properties to the operator. The outline of this thesis is as follows: In Chapter 1, we summarize the Basic Notions of Functional Analysis relevant for the later work in the thesis. We define operators, discuss monotonicity, present the theory of Sobolev spaces, and illustrate the finite element method, giving short hints to the future relevancy of the described properties. Linear Problems have been extensively studied in the past. In Chapter 2, we present three important theorems illustrating the conditions for existence and uniqueness of solutions for variational formulations of the type: (i) Galerkin formulations in Hilbert spaces: The Lax-Milgram Theorem, (ii) Petrov-Galerkin formulations in Hilbert spaces: The Babuška-Lax-Milgram Theorem, (iii) Petrov-Galerkin formulations in Banach spaces: The Banach-Nečas-Babuška Theorem, and give their proofs. Chapter 3 is dedicated to the study of Non-linear Problems. We seek to extend the ideas of the previous chapter to variational formulations containing a non-linearity b(·) depending on the solution we seek. This has a major application in the analysis of non-linear PDEs, which in general may not possess analytical solutions. To attack these types of problems, we define a weak formulation of the main problem, and discretize the domain of where a solution is sought. Next, existence and uniqueness is established through fixed point theorems, which will be given with proof. We will focus our study on two central problems: The Richards equation (a non-linear, possibly degenerate parabolic PDE) and a transport equation modelling reactive flow in porous media (two coupled PDEs). For the fully discrete (non-linear) formulation of Richards equation we show results for (i) a Lipschitz continuous non-linearity. Here we consider three cases: 3(a) First, a linearization scheme is proposed. We prove existence and uniqueness by using the Lax-Milgram Theorem in combination with the Banach Fixed Point Theorem. (b) Second, we make the assumption that the non-linearity is strongly monotone. Here, existence is proven by the Brouwer Fixed Point Theorem (c) Third, we let the non-linearity be monotone and add a regularization term to the fully discrete formulation. Here, we prove existence as in the previous step, and lastly show convergence of the regularized scheme to the fully discrete scheme. (ii) a Hölder continuous non-linearity. We give two results: (a) First, we prove existence for a monotone and bounded non-linearity. (b) Second, we state the result of existence for a strongly monotone non-linearity by the Brouwer Fixed Point Theorem. In the applications of Brouwer Fixed Point Theorem, the uniqueness of the problem is proved by assuming there exists two solutions and obtaining a contradiction through inequalities by showing estimates that can not be true. Lastly, in Chapter 4, a mathematical model of Two-phase Flow in porous media is studied. We discuss the case of a Lipschitz continuous saturation, and show for the first time a proof of existence and uniqueness of a solution for the fully discrete (non-linear) scheme, assuming the saturation to be Hölder continuous and strongly monotonically increasing. This is done by creating a regularization of the fully discrete scheme, further proving existence with the Brouwer Fixed Point Theorem, and finally showing convergence with the help of an a priori estimate. 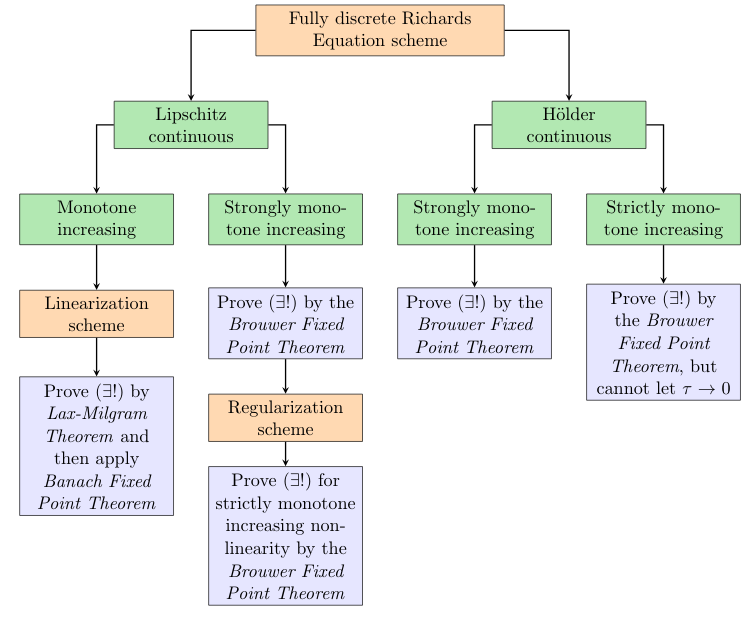