N-terminal acetylation is a chemical modification that occurs on approximately 50-80% of all proteins in eukaryotes. In humans there are six N-terminal acetyltransferase enzymes that are responsible for catalysing this process, all of which has been identified and characterized by members of the NAT group at MBI over the last decade. In 2011, a deadly syndrome caused by a mutation in the NAA10 gene, a gene coding for the catalytic subunit of the N-terminal acetyltransferase NatA was discovered. The syndrome was identified in several boys from two unrelated families and was named Ogden syndrome after the hometown (Ogden, Utah) of one of these two families. Ogden syndrome represented the first direct link between Nt-acetylation deficiency and human disease and since then, three additional mutations in the NAA10 gene have been identified in patients with either non-syndromic intellectual disability or Lenz-micropthalmia syndrome.

This month, Svein Isungset Støve, Marina Blenski and Thomas Arnesen of the NAT group in the Protein modifications, Metabolism and Disease (ProMetD) research programme at MBI together with their collaborators at Temple Street Children’s University Hospital in Dublin, Ireland, presented findings of a novel mutation in the NAA10 gene that cause a previously undescribed intellectual disability syndrome. This is the fifth mutation that has been identified in the NAA10 gene that causes developmental disorder or intellectual disabilities. NAA10 mutations that have been identified so far suggest that there is a correlation between the molecular and enzymologic effects of a NAA10 variant, and the phenotypes seen in patients. Surprisingly, the novel Naa10 mutation described in this work represents a point mutation in NAA10 that has much more severe effects on a molecular and enzymologic level than for instance the point mutation causing the Ogden syndrome, yet the phenotypes of the intellectual disability syndrome observed in patients is much less severe than the phenotypes of Ogden syndrome. This suggests that the genotype-phenotype correlations of these diseases are much more complex than first anticipated, and that additional research is necessary in order to understand the underlying molecular mechanisms behind this disease. 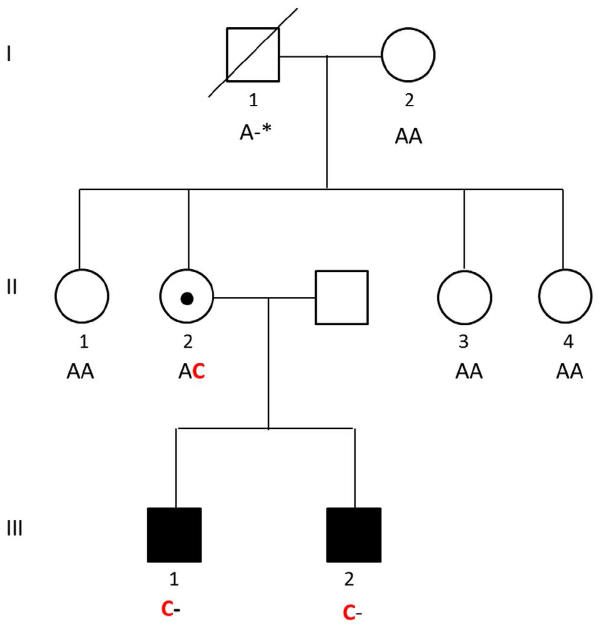 Pedigree of the family with two brothers affected by the novel intellectual disability syndrome. Males are shown as squares, females as circles. The Naa10 c.128A>C (pY43S) point mutation occurred de novo in the mother of the two affected boys (individual II:2). Both her sons (individuals III:1 and III:2) inherited the Naa10 c.128A>C.
Photo:
Svein I. Støve