Inequality in the age of the corona virus

The research programme GRIP has launched a series of interviews on global inequality as a response to the ongoing COVID-19 pandemic.

WILL THE PANDEMIC LEAD TO INCREASED GLOBAL INEQUALITY? In a miniseries the Global Research Programme on Inequality is conducting interviews with a number of persons in academia and beyond to look at the effects the COVID-19 pandemic may have on global inequality.
Photo:
JOHNNY MILLER, UNEQUAL SCENES

Global Research Programme on Inequality (GRIP) is a global research programme examining inequality across academic disciplines. The programme has a particular focus on the 2030 Agenda and the Sustainable Development Goals (SDGs). GRIP launched in 2019 in collaboration between the host institution the University of Bergen (UiB) and the International Science Council (ISC). GRIP builds on the Comparative Research Programme on Poverty (CROP, 1992-2019).

“During a discussion the day before the lockdown, we all agreed that most discussions about the corona virus lacked a perspective on inequality.

We decided to focus on how inequality is both an integral part of the corona pandemic and how it also creates and makes new disparities visible. In the days following, the corona crisis evolved to become even bigger: India imposed a total lockdown, Nepal closed its borders, in Ghana the universities there also closed, and from our partners in Latin America we received reports on how those working in the gig economy were set to lose their income. At the same time, new and harsher restrictions were strikingly different across the world. At GRIP we thought this was important because in such a dramatic situation it is easy to forget that the problems and challenges related to inequality and poverty that existed before the corona pandemic still exist in large numbers. And it is precisely these challenges that are now surfacing, with inequality – between continents, countries, and individuals – being amplified. We realized that a project such as this miniseries showed great potential.”

“That's the big question. So far, we have seen that countries with a relatively strong public sector, in particular in Asia and Europe, have coped with the crisis with a number of measures that to a large extent work in formal economies. Many countries in for example Africa have larger informal sectors with street markets based on cash payments that are crucial to the distribution of essential goods, such as food. If these are shut down, many poor people will not have the opportunity to shop at supermarkets where infection control measures can be more easily implemented — both because it is too expensive and because they themselves have lost revenue from the informal economy. Of course, these are also important challenges in countries such as Italy and the United States — communities that also have large informal economies and, in part, large groups living in poverty. Put another way, infection control measures that do not have dramatic consequences for the middle class in Europe can mean further marginalization and exclusion of poor people in the global south and also elsewhere.

Another aspect is the implementation of the principle of social isolation. In many contexts, such as in India, this will work only for those who have the means, for those who can work from home and, not least, for those who live in houses where distances can be maintained. For hundreds of millions of people around the world, this is not the case. And especially for the urban poor, social isolation will be impossible in practice. In addition, many different family and household constellations in countries outside Europe make it difficult to protect the elderly and the ill from being infected since family members of different generations more often share homes.”

“It is still too early to say for sure. We are, however, already seeing major differences in how the virus spreads in different countries. Such as differences both in access to health services and social safety nets that may help mitigate the negative consequences both of the virus directly, but also of the economic effects of an increasing number of countries closing down large sections of society. It will be very interesting to follow how different crisis measures and crisis packages that have been launched in different countries will work in practice and how these will affect global inequalities.

A relatively frightening scenario is the emerging anti-global and anti-solidarity policies in a number of relatively prosperous countries — policies that may make both debates on aid and international cooperation more difficult. One might see the shape of a type of ‘health nativism’ in which rather than thinking holistically and globally — such as the SDGs invite and encourage us to do — some countries exclusively prioritize its national populations and the short-term local solutions this entails. In such a political climate, all forms of global inequality are placed in the background, and important voices and knowledge, for example from the global South, are less available. This may apply, for example, to valuable knowledge scientists and practitioners in the global South have from combating previous major epidemics — such as from Liberia's fight against Ebola between 2014-2016.”

“We want to get perspectives from researchers, academics and activists working on inequality, but also want to see this pandemic from a development agency viewpoint, as these will see and analyse future consequences of the COVID-19 pandemic. Aid organizations are immediately affected by the corona crisis, and are unable to do much of their work, which often deals with inequality, poverty and health. So, to kick off the series with a representative from a development agency felt like a good starting-point.”

“We want to make sure we get perspectives from across the world and are now mobilizing our international network to find relevant researchers to interview. In addition to Paul Fife, we have already talked to Amina Maharjan in Nepal about how the pandemic affects migrant workers, we have interviewed Anwesha Dutta on the effects of the lockdown in India, and to Fadia Kiwan and Osama Tanous on the effects of the pandemic in the Middle East. We also hope to present more voices and perspectives from Latin America and Africa.” 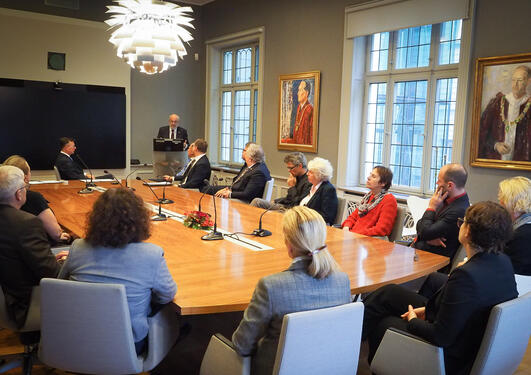 The University of Bergen and the International Science Council sign today a new agreement for the Global Research Programme on Inequality (GRIP).