What do the rocks say?

A new film category at the department opens with a paper by Professor Olaf H. Smedal given at the AAA Conference in 2014. With the help of anthropological film producers and colleagues Rolf Scott and Frode Storaas, the paper is now available as a screen version.

What do the rocks say? - by professor Olaf H. Smedal

Among the people living in the mountains in central Flores, Eastern Indonesia, there is a constitutional myth revolving around a man called Ulu. According to the locals the incidents in the myth took place some fifteen generations ago. Two rocks are central items in the story, as Ulu uses them to steer a whale across the ocean.

Professor Smedal first learned that the rocks actually still exist in 1990. In addition, he was told that the rocks contained inscriptions. 15 years later - after years of anthropological affiliation in the village - the rocks were finally taken out in the open for everyone, including Professor Smedal, to see. Both him and the villagers were eager to witness the professor's reaction, and learn what he would make of the rocks. What did Ulu's patrimony actually mean? What was the message from the ancestors?

The paper "What do the rocks say?" is in many ways Smedal's contribution to the debate regarding the ontological turn. Watch the paper in it's full length above.

What do the rocks say?

In the frequently occurring rituals enacted by the Ngadha of Flores, Eastern Indonesia, various entities are mobilised: first of all people (by drawing on networks of kinship, rank, and alliance). Moreover, rituals involve the display or actual use of specific objects – often classified as heirlooms (e.g., weapons, jewellery, human remains) understood to be inalienable wealth. Third, other substances (mainly vegetal and animal) employed must be procured (fetched from the forest or an animal enclosure; borrowed from friends and relatives, bought at regular markets). Fourth, animals featuring in ritual are consecrated and sacrificed and whenever a sacrifice is conducted ancestors are understood to be present as participants – both by consuming sacrificial matter in their own manner and by responding to queries by way of manipulating biological matter. Each Ngadha ritual is thus an event where economic activity (planned or frantic, minor or major) precedes the event itself and where humans interact with each other and in various ways with non-humans (e.g., solid objects, animals, ancestral spirits). While the paper touches on these attributes it concentrates on a rare ritual occasion featuring a foundational heirloom – a pair of rocks – of mythic provenance and uncertain properties. 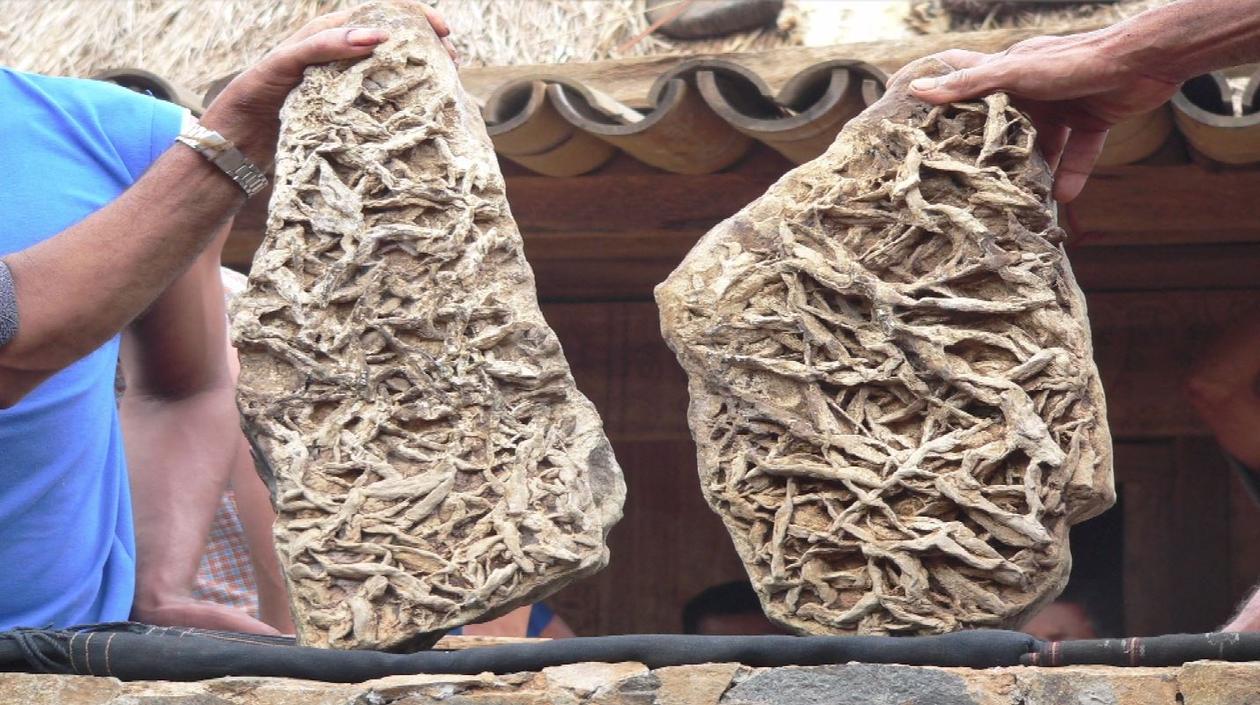 In the myth Ulu, who lived some 15 generations ago, uses two rocks to steer a whale across the ocean. What can they tell us today?
Photo:
Olaf H. Smedal