Type of habitat, fauna and flora

Fauna near the station

The Marine Biological Station - a short description of nearby localities

Summarised and updated by Torleiv Brattegard, from "The biological station 1892-1992".

The Marine Biological Station at Espegrend is located in a typical West-Norwegian landscape with fjords, bays and sounds and thousands of small and large islands and skerries. Snow-covered mountains form an impressive background to the many green hills characteristic of the area, and from the nearby Korsfjorden one can see the high mountains surrounding Hardangerfjorden, some of which are covered by Folgefonna, the third largest glacier in Norway. In many of the sheltered areas, the vegetation has an almost tropical luxuriance, which makes a striking contrast to the naked or heather-covered islands nearer the North Sea.

The Station borders a part of Raunefjorden that is separated from the main fjord by small islands with shallow sills between them. As a result, just off the Station, the bottom water of the deepest parts is rather stagnant and the bottom black with some H2S and little life. Outside the islands, however, the conditions are excellent. Great depths are found within easy reach of the Station: areas with about 300 and 700m depths can be reached in about 15 and 30 minutes respectively and the 860m deep Hardangerfjord is less than five hours away. Near the Station one can find a number of more or less land-locked fjord and landlocked heliothermic marine basins or "polls" with their characteristic hydrographical conditions. The outer shores of the islands are highly exposed, while the innermost parts of the bays and fjords are extremely sheltered. The highest daily tidal amplitude is about 160 cm, the lowest about 70 cm. In some narrow sounds the tidal currents are very strong. There is a great diversity of bottom types found in the immediate area; the only important type lacking in the vicinity is sand beach.

Raunefjorden belongs to a hydrographical system with little fresh-water influx. The Baltic Current makes its influence felt even as far north as the Bergen area. The surface salinity at the Station is high and rather constant, seldom below 30 ‰. Occasionally it can sink to about 25 ‰, but often it is as high as 33-34 ‰. In the inner parts of the fjords, however, and especially in the polls, the surface layers can be almost fresh, a stratification which naturally influences the fauna and flora. Brackish-water species live at the surface, while marine forms take over a few metres down. Many of the species which live in the outer part of the fjords disappear further in.

In the summer the surface temperature at the Station is rarely over 15°C; only in very sheltered places is the temperature higher. In winter, it drops to about 2-3°C. On rare occasions - for only a few days with years between - the water in the bay freezes at the Station's pier, but this is only for a few metres from the shore and mostly at low tide. The innermost parts of the fjords and the polls, on the other hand, are often covered with ice for short periods during the winter.

In deeper water, the hydrographical conditions are more stable. The temperature varies between about 6° and 8°C and the salinity as a rule, is about 34-35 ‰. In the Station aquaria, which get their water from about 40m depth, the salinity is practically constant 34-35 ‰ and the temperature only varies between approx. 6° and 12°C during the year; the highest temperature depending on the tanks being warmed up by the sun. Thanks to these hydrographical conditions and the equipment at hand at the Station for keeping the water at a constant temperature, animals thrive in the aquaria and developmental studies are easy to carry out.

The water in this area is usually very clear permitting, with the use of a face mask, the study of fauna and flora to considerable depths. Diving is a normal activity at the Station. Seasonally, of course, plankton blooms make the water turbid, and some summers the water for many hundreds of kilometres is quite milky with the cocolithophorid Emiliania huxleyi, which can attain concentrations of 115 million cells per litre. More or less land-locked areas with heavy pollution are also found not far from the Station.

With so many different depths and bottom types available, the fauna and flora are very rich. More than 4 000 species of animals and about 250 species of higher algae have been recorded from the working area of the Station. This, of course, is due not only to the varied surrounding, but also to the fact that the Station lies in an area in which not only boreal species are found, but also both more northerly and southerly species. Since 1949 more than 50 new species have been described, half of them during the last three years.

Many animals characteristic of the deep sea are encountered in the fjords, and there is hardly any other place in the world, where one actually sails inland in order to study deep-sea fauna. The fjord bottoms are characterized by a rich fauna of foraminiferans, including, among others, the almost 10cm long Bathysiphon filifomis. The trawls and dredges bring up the sponge Thenea muricata, large sea anemones (Bolocera, Actinostola), sea feathers (Kophobelemnon, Stylatula, Funiculina), soft bottom corals (Isidella lofotensis), the green echiuroid Hamingia arctica, Sipunculus novergicus, crustaceans such as Pandalus, Munida, Geryon, and Calocarides coronatus, Neaera rostrata, the swimming Bathyplotes natans and other deep-living holothurians as well as many kinds of Pogonophora, which are also taken in shallower water. With luck, even such interesting forms as Branchiocerianthus norveficus, Rhizocrinus lofotensis and Brisingella coronata can be found. The prehistoric-looking rabbit-fish (Chimarea monstrosa) probably draws more scientists to the Station than does any other animal, except perhaps the hagfish, Myxine glutinesa. Chimaera can be taken in great numbers in trawls together with other deepwater fishes such as Argetina, Brosmius, Sebastes, Lysenchelys and myctophids. Small sharks, skates and rays are also common. Even the brownish medusa Periphylla periphylla is taken in great numbers in the fjords together with the octopus Bathypolypus bairdii.

Another characteristic deep-fauna is found on rocks and boulders, where large sponges such as Geodia and octocorallians as Paragorgia, Primnea and Paramusricea are common, and the large Acesta excavate is also found here. In some places there are extensive reefs of Lophelia pertusa with more than 300 associated species, and on dead coral, shells and stones, the tiny Rhabdopleura is common, if one happens to find the correct place.

In the current-swept sounds the flora and fauna are extremely luxuriant. Most obvious are the great numbers of nest-building Limaria hians, Metridium senile, Ophiocomina nigra, sea urchins and Cucumaria frondosa. In the polls, many brackish-water species occur, but the bottoms are often quite devoid of life. In some polls, oysters are still cultivated. The different types of sand and shell-sand are inhabited by Cardium, Mya, Venerupis, and Ensis, and in some places a typical interstitial fauna is found with Halammohydra and many of the other animals usually living on this type of substrate. Amphioxus is also common is some places.

The outside of the outermost islands can be visited only when the North Sea is calm, which is not often. Here a characteristic surf fauna and flora is found. Semibalanu balanoides forms a belt many metres wide. Between and on the barnacles are found clusters of thick-shelled white dog whelk (Nuceila), while elegant top-shells (Calliostoma) and two species of Patella are common. Most impressive are the large brown algae such as Alaria, Himanthalia, and the Laminaria species, which here replace the fucaceans of the more sheltered localities.

On both exposed and sheltered shores, rock pools and crevices are found at all levels, and they have their typical fauna. Extremely common is the red Actinia equine.

An additional faunal element is regularly brought to the area by the North Atlantic Current. Some years the sea is completely filled with salps. Siphonophorans, goose barnacles, spiny lobsters and giant leather turtles have also been caught in the vicinity.

Thanks to the short distances to all kinds of biotopes and thanks to the equipment on board our vessels, it is easy to carry living animals home to the aquaria. Deep-water animals can also be caught easily and brought back to the laboratory alive, as many of them occur at quite shallow depths in the fjords and as the temperature of the surface waters is low. Thus within 15 minutes of being collected, specimens can be transferred to aquaria where they can survive for months, permitting studies of even their larval development. Lophelia has been kept alive for a year and a specimen of Palinurus has lived in the aquaria for more than six years, moulting once a year.

Flora near the station

The field station is situated by an open fjord. In the proximity of the station one finds a variety of different biotopes, including sheltered polls. From the station it is only a short distance to wave-exposed localities in the outer part of the coastal archipelago. A rich marine benthic algal flora of around 300 species (Chlorophyta, Rhodophyta and Phaeophyceae) is found in the area. These are species belonging to the temperate North Atlantic marine flora. The large brown algae (Laminariales and Fucales) dominate in the subtidal and the intertidal in the sheltered parts.  In the sheltered bays and polls rich eelgrass beds (Zostera marina) are situated.

Over the past 100 years a number of new seaweeds have arrived at the west coast of Norway. A few of these may be migrating northwards from more southern areas (e.g. Shetland), while others originally came from very distant areas. Some introduced species have the potential to become very abundant in their new home. Around the field station it is very common to find Codium fragile, Bonnemaisonia hamifera, Heterosiphonia japonica and Sargassum muticum. At the University of Bergen there is ongoing research about distribution and ecological effects of introduced seaweeds.

More photos of Norwegian seaweeds can be viewed at http://seaweeds.uib.no. 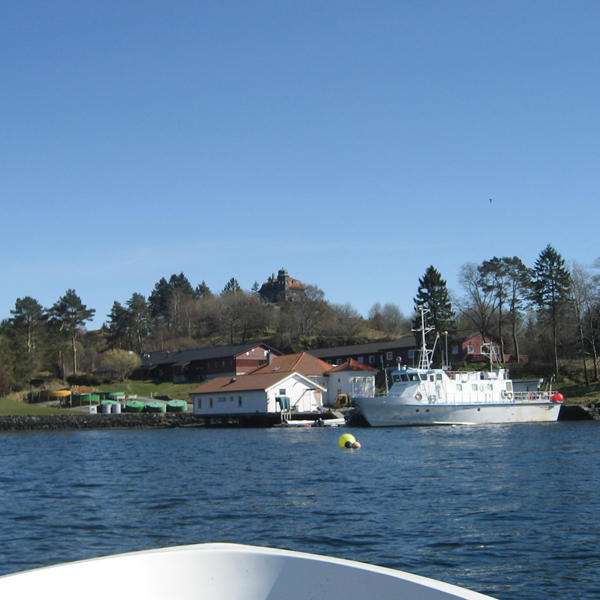